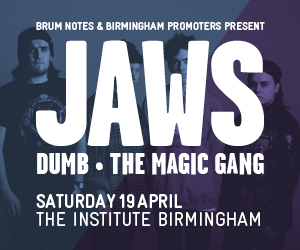 B-Town’s young guns JAWS bring the party home with a sold out show at the Birmingham Institute. Louder Than War’s Harley Cassidy was there to check it out.

Over the past year the Birmingham music scene has not gone unnoticed by anybody worth caring about the cause. It’s been written and spoken about enough. There’s been enough fangirls putting a “Swim Deep” wave sign in their Twitter name. And the rolled up trouser population has surged by at least 80%. But ultimately, the popularity of it has been something that none of its counterparts or followers could ever have expected.

Formed out of essentially friends just wanting to mess around and make music with no underlying pretension (e.g. claims of saviours of guitar music), the Birmingham scene has a bountiful, friendly energy that has enabled listeners to properly engage and let loose. Birmingham in general had been crying for a band or scene to really uplift its current heritage. Forget Ozzy back in his Sabbath prime or the Midlands howl of metal or the dad-rock, 60s mod revival of The Twang and Ocean Colour Scene, where was the soundtrack to our now?

People forget, or quite possibly choose to forget, that Birmingham is the second biggest city in this country. It’s vast; it has great venues and great clubs. Yet, we pretty much had nothing to show for it. It just seemed to have slipped into a crack somewhere between London and Manchester, disregarded. So, thank god for bands like Peace, Swim Deep and JAWs, because whether they’re aware of it or not they brought a huge amount of teenagers/young adults with refined music taste in Birmingham, together. They paved the path for now a larger throng of bands to start taking it by the helm again. They made Birmingham exciting, and dare I say it, cool?

Of course the fun factor is important – it stands clear in the music and more so in the live show. Never take it or yourself seriously. If previous JAWs shows involving inflatable sharks have anything to do with it, we know we’re good.

JAWS’ lazy, zoned out, tranquil indie pop does something to a crowd. It makes them unleash any exuberance that’s been pent up beforehand and relay it full throttle into a midst of like-minded people. It’s strange to stand back for once and observe JAWS’ crowd as opposed to being in it. It’s weird not being shoved around and having to shield myself from razor sharp elbows and scuffed pairs of gravity defying Vans. Everyone looks so happy. People are hugging and holding hands. It’s like ecstasy personified. The music hasn’t even started yet.

Connor Schofield’s lyrics draw on lustful teenage dreams of girls and the beach. JAWs’ guarded weapon that is the synth does wonders for their music too, allowing people to visibly bounce and fuck a little bit of shit up. Connor looks more and more confident in his role of frontman. He smiles and seems genuinely happy at how far his band has come and the amount of people who revel in the music. A sold out gig aint nothing to mess around with.

The band as a collective look slicker than ever, upgrading their Wavves-indebted indie pop into sharper slices of jangly guitar. The rain macs have been ditched too. Think Too Much, Feel Too Little creeps in at first like a clean-cut bit of The 1975 but is brought back to B-Town level with those trademark, drawling, baggy-borrowed vocals.

The streams of summer spawned hits from last year are still creating waves even now. Stay In, Stay Out, Surround You and Gold are all received buoyantly even for this pumped up crowd. To a Birmingham reveller’s ear, JAWs are part of the DNA that kick-started last year and are almost like old-timers, but to everyone else out there they’re just getting started.

People are here to support yet party in equal measure as every familiar face from Birmingham’s music fanbase and band scene are here to see the lads play their biggest ever headline show to date. No one leaves disappointed.

With promise of a debut release this year and a string of festival dates this summer, JAWs can surely only ascend?