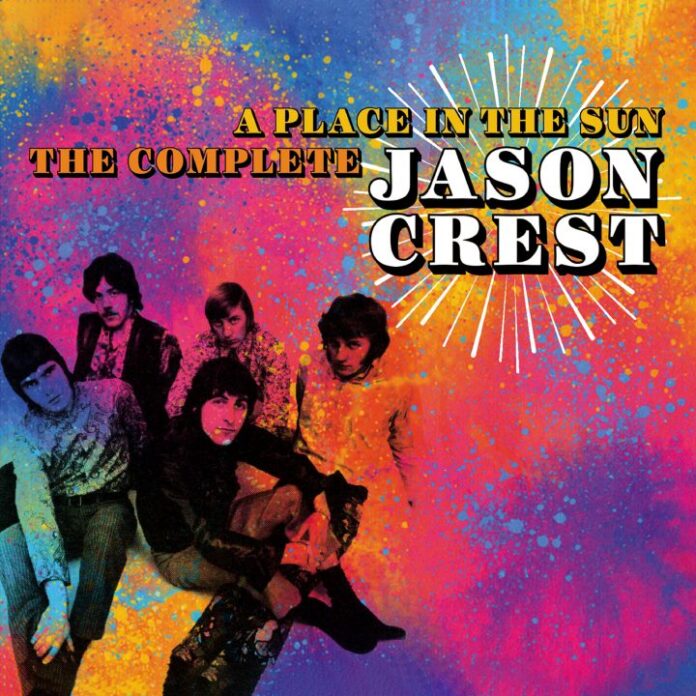 Jason Crest – A Place In The Sun 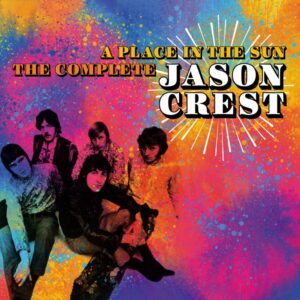 Subtitled The Complete Jason Crest, this 2CD set brings together everything recorded by the Kent based psychedelic originals, including their legendary A Place In The Sun/Black Mass single….LTW’s Ian Canty settles for a place in the shade…

The late 1960s were a time of when the over production of singles in the UK was nearing its zenith. Only very few of the hopeful that managed to get a record released had a chance of even a light brush with the charts. Psychedelia, when it hit big as a national craze in 1967, had bands up and down the country donning beads and kaftans while trading in their r&b music ideals for the new tripped-out, fazed at the edges daydream approach. Almost everyone was getting in on the act. Whilst Pink Floyd and their hipper than thou Swinging London pals made busy at the uber-cool UFO and Middle Earth, the more provincial psych outfits had to make do with turning youth clubs or church halls into a psychedelic wonderland on a weekend and then putting it back as they found it (if not “the vicar must be informed!).

Tunbridge’s own Jason Crest turned up, tuned up and psyched out with the best of them outside the “inner circle”. Although they did make it to the capital’s cool nightspots and got signed up, they ended up disappointed with the music business hustle and failed to make a breakthrough to the pop charts, despite a run of impressive single sides. The band’s origins went back to oddly named beat act The Spurlyweeves (or Spurleeweeves), formed by Terrys Clark and Dobson on drums and guitar respectively, with bassist Ron Fowler and Dave Tiffin also on guitar duties. Tiffin was the first casualty as Derek Smallcombe, poached from another local act Charlotte Black, replaced him. Dobson moved to keyboards and Clark came out front to sing, with Roger Siggery taking his place behind the drumkit.

With this line up they cast off the trapping of their former existence with a new name The Good Thing Brigade, designed to bring them up to date with the happening sound of psychedelia. They also updated their live set, cutting out many of their covers for Clark/Dobson originals that linked them with the emergent underground bands. They started playing regularly on the London gig circuit clad in regulation beads and flower power threads. The band’s higher profile meant record companies started to sit up and take notice.

Some interest from EMI was trumped by the Philips label, who signed the band up after their A&M man Fritz Fryer, formerly of the Four Pennies, was impressed when seeing them perform on stage. Around the same time as signing the deal, the name of the group was changed to Jason Crest. There was no person of that name involved – Clark/Dobson song The Collected Works Of Justin Crest, an original concerning an imaginary author, was subtly adjusted to fit.

Their first single under the title Jason Crest was a pairing of Turquise Tandem Cycle and Good Life. The former, a charming blissed-out, slow psychedelic ballad with a suitably bizarre lyric, was the lead track. A quality debut, but despite a fair critical reaction and plays on BBC’s new station Radio One, it did not sell in great quantities. Next effort Juliano The Bull suffered the same fate, a slight step backwards in that it was a decent sound but not really hit material. I preferred flipside Two By The Sea, which is beautifully understated.

With two failures out of two Jason Crest-penned singles, Philips insisted they went with covers on the next throw of the dice. Fellow pop psych act The Move, a band with a sound that had a vague resemblance to Jason Crest from a distance, had at the time been very successful. So the label got the band to cover (Here We Go Round The) Lemon Tree from first Move LP. The Crest version was very similar to the original, but even so did not crack the charts.

Ron Fowler quit the band at this point, returning to his day job at the local council. He was replaced by Essex boy John Selley. Philips again looked outside of the band for single material. The fourth Jason Crest 45 paired a side Waterloo Road, written by Michael Deighan and Michael Wilshaw (ex-Four Pennies), with band original Education. It flopped, but not long after singer Joe Dassin would put French lyrics to the tune and retitle it Les Champs-Élysées. He scored a big hit in mainland Europe with the song, which again may have given Jason Crest the distinct impression of what “might have been”.

Final Jason Crest single A Place In The Sun emerged in late 1969. A excellent pop sike effort with strings, driving acoustic sections and just a touch of resigned disillusion in the song’s tale, Philips were undergoing internal ructions and as a result did not promote the record efficiently. Also, being the final waxing that the band were contracted to the record company for, there was less of a incentive for the label to push for success. A shame and doubly so because one of the band’s more memorable efforts Black Mass featured on the flip, an endearing masterpiece of manically sung, doomy and portentous, but also slightly comical psychedelia.

Even apart from their failing relationship with Philips all was not well in the Jason Crest camp. Terry Clark, the group’s leading figure, didn’t fancy some dates in Hamburg and the “party hearty” vibe that the other members of JC were subscribing to. He was replaced by Brian Prebble as lead singer. The new version of the band recorded six numbers for a radio session and included ex-Mike Stuart Span guitarist Brian Bennett, before switching names to High Broom in 1970.

Including all the single tracks, disc one of A Place In The Sun also has some strong unreleased material. King Of The Castle comes complete with great grungy guitar over sugar-coated organ swirls and results in a very enjoyable and noisy psych stomp. Teagarden Lane drifts along elegantly and the piano-driven The Collected Work Of Jason Crest is simply sparkling. Charge Of The Light Brigade comes over more restrained and is one of their very best, very chilled psych pop which surely stood a chance of making a mark if it was released at the time. I like Education, even if the sleeve note doesn’t, because it has a good knotty r&b rhythm to it and Good life is a smart music hall/psych mash-up. The disc finishes with a “dubious mix” of Black Mass that sounds like it jumps to me.

Disc two concentrates on the later period of the band on the whole. There are some so-so to ok covers i.e. California Dreamin’, Paint It Black and the Beatles’ Come Together. They have a spirited try at the Sharon Tandy/Fleur de Lys stone cold classic Hold On though and their version of Paul Simon’s A Hazy Shade Of Winter has some neat vocal harmonies. Their own songs were better: Good Times, Bad Lines shows a cynical edge which must have come through bitter experience, but it is a strong effort stacked with good bass and guitar work. Better By You, Better Than Me is proto prog and Percy’s On The Run’s soul groove a real treat.

Most of this material was previously available on the Wooden Hill compilation The Collected Works of Jason Crest from a few years back, but it is good to see their material back in circulation. Jason Crest’s strong use of keyboards pointed to some similarities with the more successful Procol Harum, but at their best they came out with some unique and satisfying offerings. Black Mass is excellent, slightly crazed but very, very good, however there’s an awful lot more to JC than that. Aside from a few familiar cover versions that don’t add a great deal, their own songs shows an imagination and verve that I couldn’t help but wish we got to see more of. Psych buffs should cop an earful, but anyone who likes a little plush, if occasionally batty, late 1960s pop will find a lot to love here.