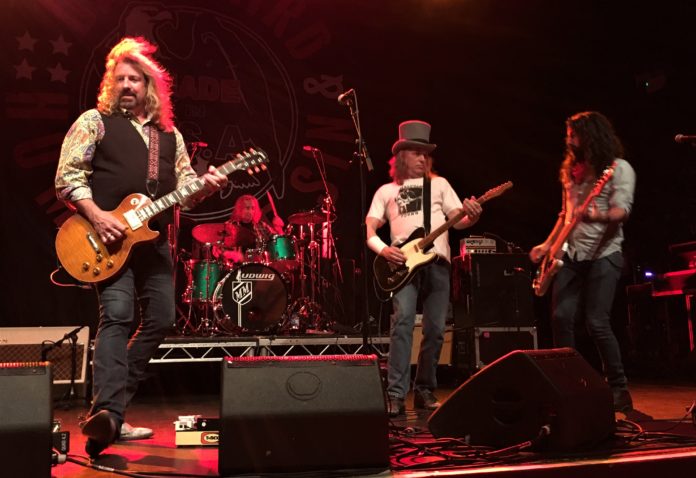 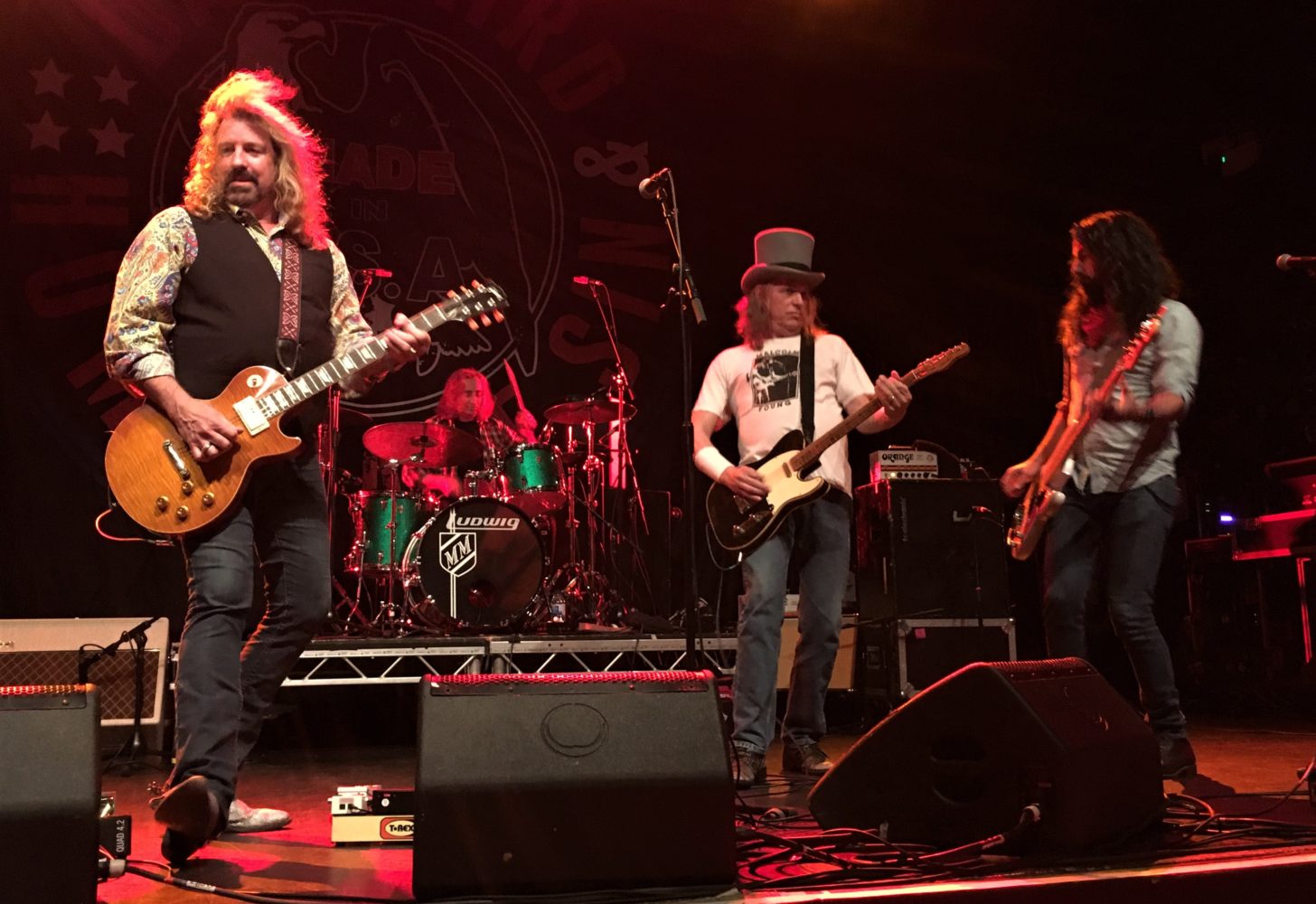 This was the dream ticket for anyone who loves southern/ alternative country rock. Ian Corbridge caught up with Jason & The Scorchers, The Kentucky Headhunters and Dan Baird & Homemade Sin when they touched down in Manchester.

There was a time in the mid-80s when Jason & The Scorchers could be rightly regarded as the greatest rock’n’roll band on the planet, blending country and rock in such a fashion as had never been witnessed before. Out of the ashes of the Scorchers and their fellow southern rockers The Georgia Satellites, eventually came Homemade Sin fronted by Dan Baird from the Satellites and backed by the awesome talent of Warner Hodges from the Scorchers as well as Mauro Magellan from the Satellites. For fans of rock’n’roll this really was nothing short of the dream ticket and their prolific touring and extensive output has been a true blessing for those lamenting the demise of their original bands.

Dan himself is a prolific writer and this was not inhibited by a touring hiatus in 2017/18 caused by a bout of leukaemia which thankfully Dan is now in remission from and fully on board with his usual touring schedule. Even in spite of that, Homemade Sin marched on with the supremely talented Joe Blanton stepping into Dan’s very big shoes in a magnificent and relatively seamless fashion. And throughout all this, we have seen the Scorchers re-emerge through the release of their first studio album in 14 years, Halcyon Days, in 2010 and sporadic live tours and events, all of which have kept their superb legacy wholly intact and very much alive and kicking.

Tonight we are treated to a gig that I thought only dreams were made of, with Homemade Sin playing alongside the Scorchers and the Kentucky Headhunters, another country/southern rock band who have an even longer pedigree than the aforementioned bands. And there are no egos on show on this tour as demonstrated by the ever revolving headline acts throughout its course.

In Manchester its Homemade Sin who are first to tread the boards. Dan of course never 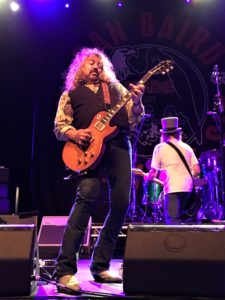 works with a set list and Warner will always tell you they start with a pool of around 150 songs and anything can happen on any given night. The band waste no time in launching into a furiously paced set with one foot in Nashville and the other placed firmly in pure kick-ass rock and roll and Six Years Gone from the Satellites back catalogue sets things up perfectly.

Julie & Lucky is immediately recognised by the assembled masses and, as ever, segues into I Love You Period, with vocals traded between Dan and Warner and accompanied by a mass singalong by the crowd. Movin’ Right Along from Get Loud keep the momentum going and Younger Face is simply majestic. And if we thought it was getting warm, things got a whole lot hotter with a truly epic Crooked Smile with a magnificent dual between Warner and Sean Savacool on bass, demonstrating why the latter has become such a valuable member of the touring band. With Mauro an absolute tour de force on the drums, or as Dan described, “captain of the engine room”, Warner’s beaming smile as he swings his guitar around his neck and Dan’s powerful vocals, it is hard to believe that we have two more acts to come.

The Satellites standard, Keep Your Hands To Yourself again prompts a singalong and, whilst All Over But The Crying slows the pace only slightly, it’s immediately picked up again with a blistering Dan Takes Five and Sheila. The joyous interplay within the whole band is totally infectious and lasts to the final note of Damn Thing to Be Done which closes the set. Phew! 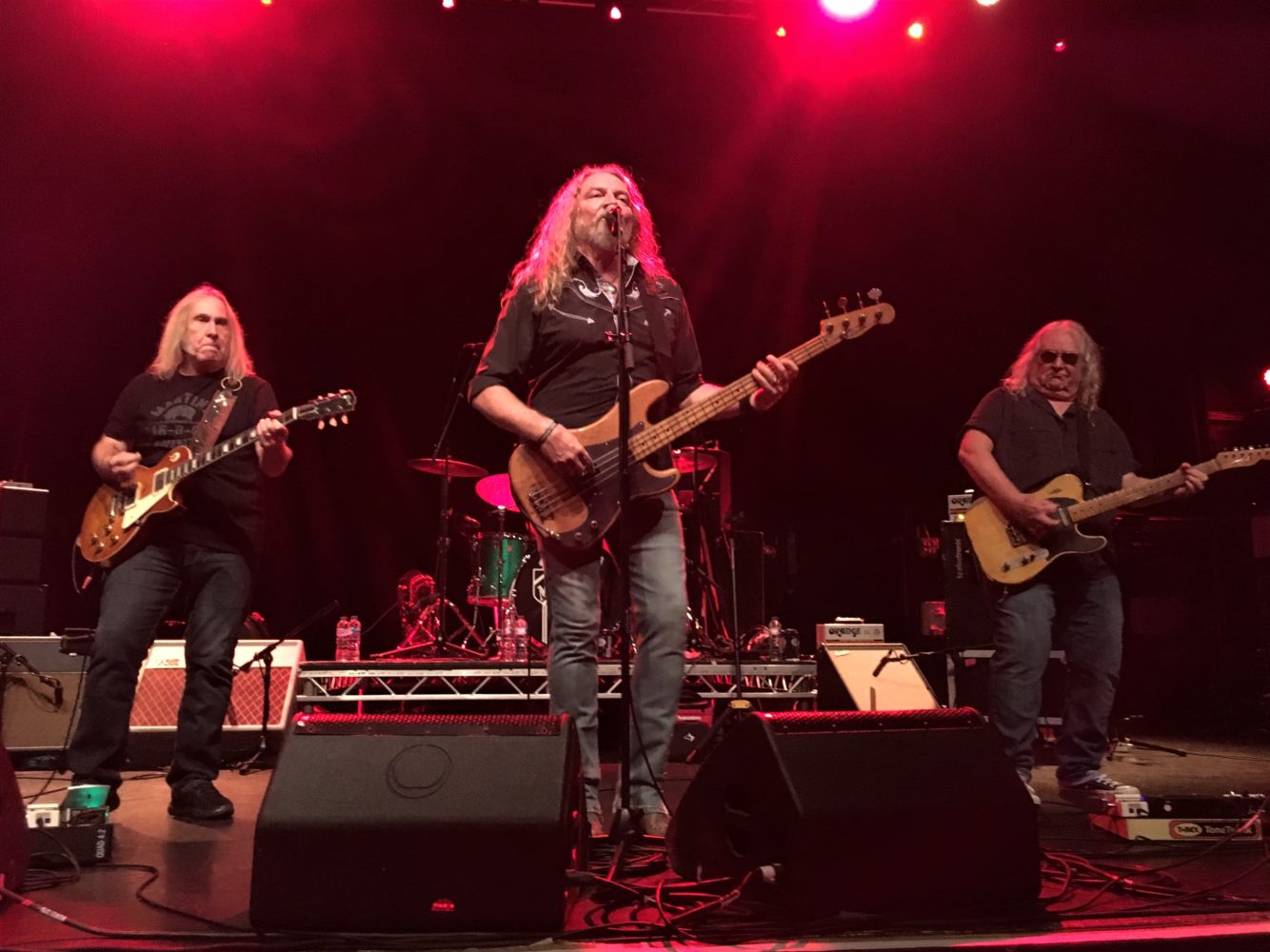 Next up are The Kentucky Headhunters with another mix of country and rock, albeit with a nod more towards harder edged blues. Formed in 1968 by brothers Richard (guitar) and Fred (drums) Young who still remain in the band, they are augmented by Greg Martin (lead guitar) and Doug Phelps (lead singer and bass). As they launch into Dixie’s Lullaby and It’s Chitlin’ Time, the quality of the musicianship is immediately evident and the band are loving every minute of it.

A bluesy Rag Top was followed by Walk Softly On This Heart Of Mine, a cover of a song by Bill Monroe, the father of bluegrass. Then pace was slowed down again as a familiar guitar intro beckoned a fine cover of House Of The Rising Sun. and it wasn’t a big surprise when Warner was brought back on stage to provide a third guitar on a great version of Stumblin’.

Seemingly Warner was not previously aware that his services were needed for a further song but of course he obliged without hesitation as they launched into a classic extended version of Freddie King’s Have You Ever Loved A Woman which for me proved to be a real highlight of the set. Some superb interplay from the three guitarists really brought the house down.

Little Miss Blues Breaker really brought out the bands southern rock roots before they moved into a crowd pleasing version of Spirt In The Sky which really got the crowd dancing and clapping along. And the momentum carried right into a great version of Dumas Walker which closed the set in fine style. By this stage there was little doubt that the guys from Kentucky have been having the time of their lives on this tour. 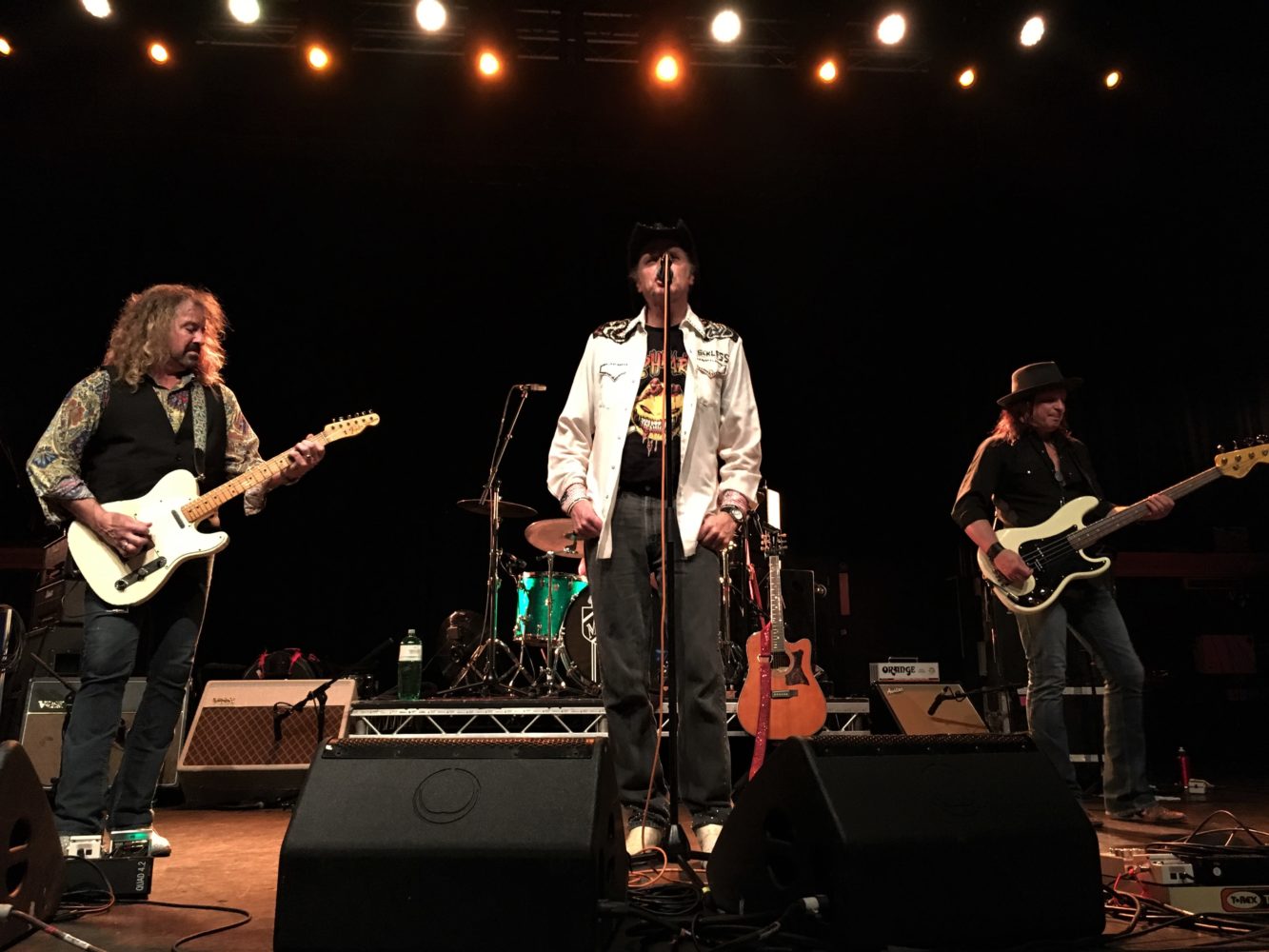 Closing the bill tonight Jason & The Scorchers produce their classic mix of country and high-energy rock which blazed a trail for all those who followed in their wake, with Jason still bedecked in that embroidered shirt and cowboy hat as if time had stood still. A high energy version of Self Sabotage really set the tone for this final set of the night.

A classic Shop It Around from Lost & Found really engaged the crowd and was followed by My Kingdom For A Car, from Thunder & Fire, and a truly sublime Harvest Moon, with Jason on acoustic noting that this was his favourite Scorchers song.

With Jason sporting a Wildhearts t-shirt in recognition of their previous collaborations, he noted that Crashin’ Down was Ginger’s favourite song of theirs as they launched into this ever popular anthem before moving into a storming I Can’t Help Myself which some awesome lead guitar from Warner. With Jason recognising he had worked with his guitar maestro for 40 years now, Warner looked almost embarrassed with the crowd’s chant of ‘Warner, Warner…’.

As Jason told the tale of an early scrape when original and sadly deceased drummer Perry Baggs got the band out a tricky situation in a gas station when Jason got into the wrong car, both Al Collins (bass) and Pontus Snibb (drums) took up their acoustics for a touching version of Somewhere Within. Jason then took a brief respite as Warner took us back to kick-ass rock’n’roll with lead vocals on Better Than This.

We then get treated to a sublime version of Broken Whiskey Glass, the first original Scorchers song ever written, which starts off nice and slow before a sudden change of gear and finishing at breakneck speed. A stomping version of I Don’t Really Want To Know has Pontus thumping out the beat, Al solid on the bass, crazy dancing and awesome harp from Jason and another superb solo by Warner. A blistering White Lies then brings the main set to a close in triumphant fashion.

But no one is allowed to leave the building as the Scorchers return to play Absolutely Sweet Marie, a song they really made their own over the years, augmented by various Headhunters on backing vocals. And as if that wasn’t enough, the tour was brought to a climatic finish with highly energised Route 66 with the men from Kentucky now playing along as well. What a finish and what a night! 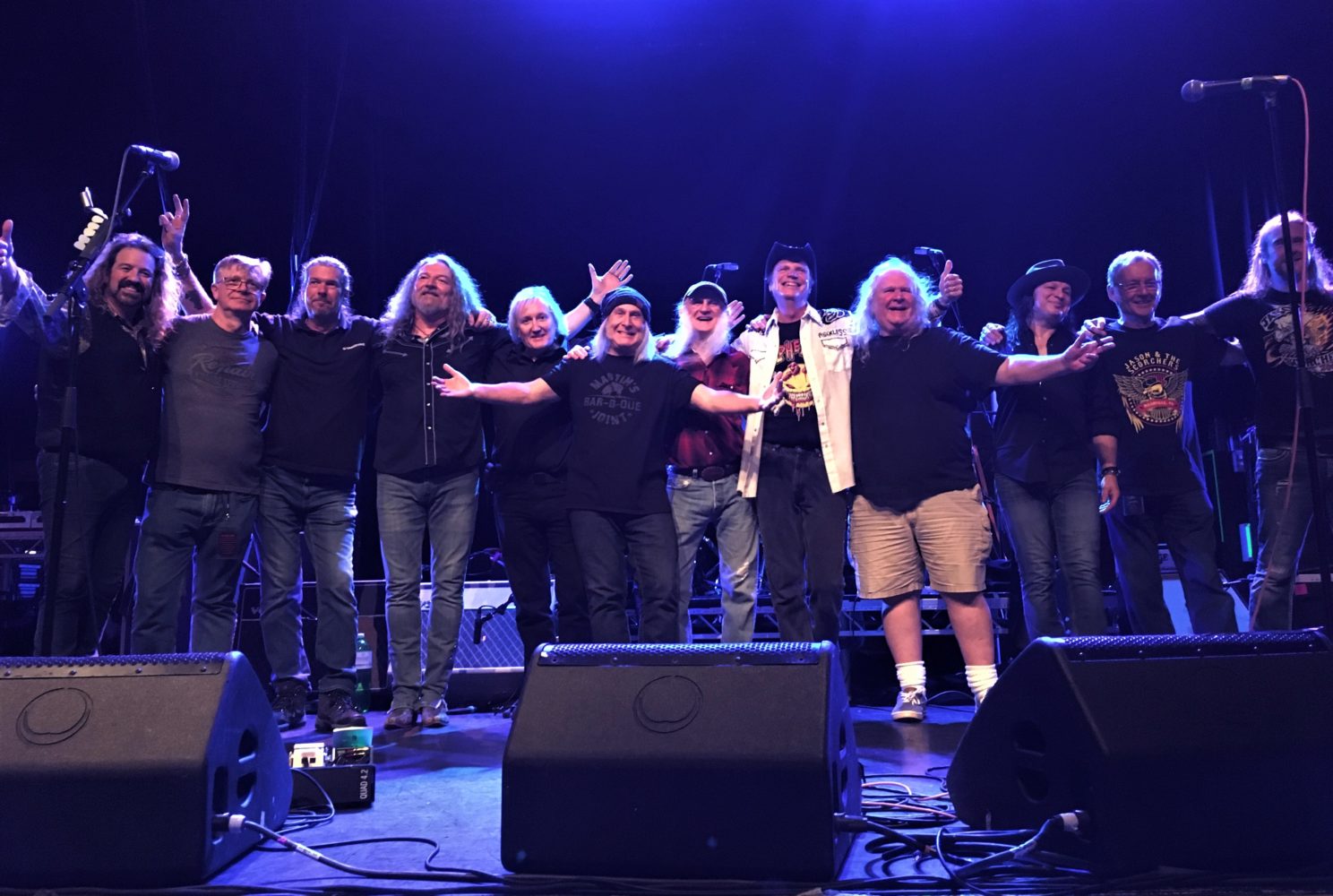 As Jason has sung on many occasions, good things come to those who wait, and we have all waited a long time for a night like this to happen. A truly exhausting and euphoric night of classic rock’n’roll delivered by those who know best and a real celebration of all that is great about live music. The hairs on the back of my neck will remain still standing for some time to come!