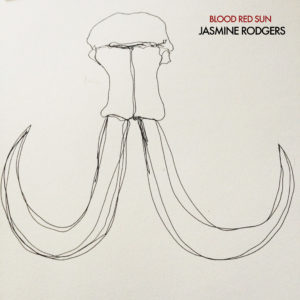 Louder then War get entranced by the beauty of Jasmine Rodgers’ debut LP.

Blood Red Sun is the insanely beautiful and remarkable debut album from solo artist Jasmine Rodgers. Having had a varied, but art and music filled vocation, Rodgers has experimented and collaborated with musicians such as Mendi Mohinder Singh and Waqas Choudhary and after visiting the Joshua Tree on her travels, Rodgers enlisted producer Sean Genockey (Tom McRae, Futureheads), whose experience working at Joshua Tree’s Rancho de la Luna studio ‘made him ideal for bringing forth the material’s widescreen yet rootsy vibe.’

Right from the start you get the intimate and close feel of this LP. Intricate finger picking (on a Ukelele?) on the lead track ‘Blood Red Sun’ really sets the scene for the rest of the LP. With a sultry voice that often borders on Beth Gibbons’ deep tones, Rodger’s voice and lyrics grab you right from the start and hold you there until the final track.

‘Taken’, as well as some of the other tracks on this LP, is short, but very sweet. And even in its brevity, it has the insistent arpeggio finger picking as well as the big haunting melodies Rodgers produces.

As the LP progresses, Rodger’s creates some great folky foot tapping catchy songs such as ‘Icicles’, ‘Follow You’ and ‘Between Spaces’ that also have beautiful instrumentation and her unmistakable voice ever present.

‘Underwater’ is a standout track with collaboration with Scott Matthews with whom she admires and has played with before.  It’s big in scope and feels very personal to Rodgers.

Final track ‘While you were sleeping’ is a straight out playful ‘hula’ ukulele influence straight out of the fifties Hawaiian films that Elvis sometimes partaked in. Really fun stuff.

Jasmin Rodgers has the musical breadth and depth of musical knowledge to take her far beyond this debut. A beautiful voice and beautiful playing that puts her in the same field of Nora Jones, Katie Melua, First Aid Kit and a less intense Joanna Newsom.

Oh and her mother is a Japanese poet and her father is the legendary vocalist Paul Rodgers (Free, Bad Company, Queen) So there may be something in it….. Absolutely essential listening.