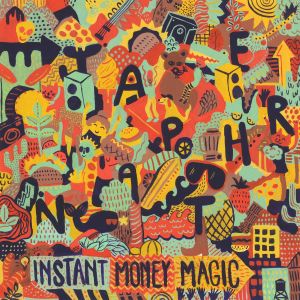 For the uninitiated, Japanther is Brooklyn art punk duo Matt Reilly and Ian Vanek, known for their riotous live shows and outlandish performance schemes (which in the past have included a giant animatronic dinosaur and collaborations with the Aquadoom synchronized swim team).

Despite the extravagant scale and avant garde wackiness of these shows (their vocals are also channeled through old telephone handsets they’ve made into microphones) Japanther remain at their core a pretty straightforward band with heart and hooks to spare. The last time I saw them it was a joyfully sweaty celebration of punk and just being together in the same dirty, hole in the wall DIY loft space on the same strangely complicated planet. I had to choose between Japanther and Human Eye that night, and believe me, it was not an easy decision to make!

Instant Money Magic follows last year’s Eat Like Lisa Act Like Bart, and is their eleventh full length album (I think?), although in this case the term is loosely applied since the whole darn thing clocks in at an ultra compact 24 minutes, with the longest song peaking at a scant two minutes and nine seconds. Short and sweet is the law here, and it prevents Instant Money Magic from becoming too predictable or derivative.

Opener Wiggmann kicks off in a sludgy stew of hip hop samples, which is another element that gives Japanther a warm, home-like familiarity to anyone who has spent significant time in Brooklyn. Hip hop is just a side effect of Brooklyn living; its rhythmic beats are the soul of the streets, from fashion, graff-writing and skate culture, and it permeates almost all aspects of the everyday, whether you’re aware of it or not. On top of that, Japanther generously adds the brisk tempos and ramshackle pop sensibilities of The Ramones, beautifully saluting and exploiting these two uniquely New York legacies, and they seem to have a special understanding of the city’s overall positive potential.

Two of the strongest album cuts, Dreams Come True (originally by Puppies) and Do It (Don’t Try) embody this optimism with an accelerated fuzz bass blast, galloping drums and the weird whimsy of a toy keyboard serving as backing vocalist. The playful simplicity of the basic thrift store keyboard harmonizing with the vocals throughout Instant Money Magic brings a modest, homegrown charm to the songs but is sometimes too distracting and can overshadow the rest of the music, sticking out like a hitchhiker’s thumb after a glitter ombre manicure. This emphasis on one hummable melody perhaps makes the songs more instantly recognizable and easier to sing along to, but more often than not it ends up burying the other sounds in a grating high-pitched monotone. However, it is something that bothers me less on each subsequent listen, and Japanther’s all pervading goodness counteracts much of the unevenness and weak spots of the record.

Maybe there is nothing in this collection of songs as instantly touching or effecting as Porcupine or River Phoenix, but that doesn’t mean Instant Money Magic is spiritless and lacklustre. Take Me In and Let Me Go motors steadily along in a contagious mid-tempo mud groove; Vicious is a great, angsty snarl in classic punk style and the aforementioned Do It (Don’t Try) is a boisterous skuzz bucket of a song with a disarmingly catchy chorus. All We Got Is Each Other is All Punks Got by Ghost Mice reworked from Flogging Molly-esque acoustic folk punk to the typical dog-eared anthemic noise we’ve come to expect from Japanther.

Instant Money Magic is mostly pleasurable but somewhat underdeveloped, and while pre-existing Japanther fans like me will be generally satisfied with the familiar formula, newer converts might want to start with Skuffed Up My Huffy or Beets, Limes and Rice.

All nitpicking and boring critical analysis aside, Japanther remains lovably unchanged while celebrating their imperfections, and like Brooklyn itself, they excel at bringing great things out of the muck of obscurity. It is a comfort knowing they’re around, whether you view them as a stubbornly longstanding yet determined novelty act or your all time favorite band.