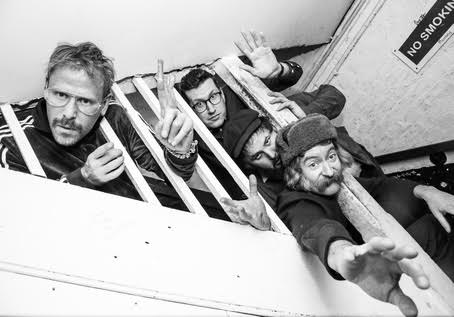 Japanese Television have announced the reissue of their celebrated first two EPs plus added 6Music sessions to be released via Tip Top Recordings.

Japanese Television , Al Brown, Alex Lawton, Ian Thorn and Tim David Jones formed with a shared vision of creating a modern psychedelic space-surf soundscape. The band went into the studio with Kristian Bell (The Wytches) who captured the raw spirit of their live performances to 8-track tape. The tracks make up their debut self-titled 2018 EP, which was named EP of the year by both Gideon Coe and Amy Lame at BBC 6 Music and was swiftly followed by EP II.

This new release combines both of these sold out releases with the addition of four Mark Riley BBC 6 Music Session tracks on digital and heavyweight vinyl formats released via Chicago label Tip Top Recordings.

The two heavily sought-after EPs original limited run sold out quickly. The decision to bring these two cuts together, paired with their respective live recordings, completes the impeccable full Japanese Television body of work to date.

Having sold out London’s Waiting Room, completed a debut UK headline tour, played multiple festivals including Left of The Dial, and supported the likes of  Swedish Death Candy, Dead Meadow, Yak, Snapped Ankles, and The KVB, in February 2020 Japanese Television take on their biggest UK headline tour to date.