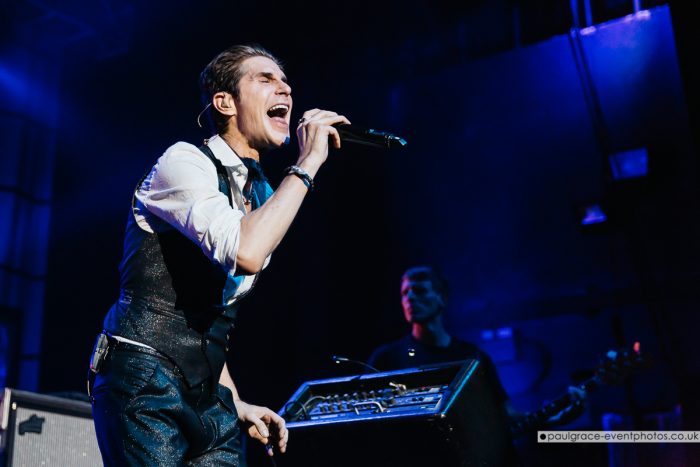 This year Jane’s Addiction celebrate the 25 year anniversary of their 2nd studio album Ritual De Lo Habitual with a European and US tour. Paul Grace reports from the O2 Forum Kentish Town show for Louder Than War.

The 1st time I saw Jane’s Addiction was in 1990 in a dingy club in Manchester, on the Ritual De Lo Habitual tour.

As the band came on I got knocked unconscious very briefly by a kick to the head from an over enthusiastic stage diver. Squished up against the front barrier, I came to a few seconds later to find Perry Farrell standing directly above me in a flowery dress and green wellington boots. It was just at that point in ‘Up The Beach’ where he makes his initial banshee scream. It felt strangely religious and definitely a moment I’ll never forget.

It was an incredible time for Jane’s Addiction; they pretty much conquered the world on that tour, and it was around that time that Perry Farrell unveiled his exciting new brain-child project; a fresh concept in travelling festivals called Lollapalooza.

Their magical melting pot of creativity was almost too good to be true though; and ultimately it was. Consumed by drink and drugs, and with an almighty clash of egos, Jane’s Addiction’s time at the top was short-lived, and they swiftly spiralled into a free-fall of self-destruction, leading to the band’s premature demise the following year. Like many fans I was heartbroken.

Since then Jane’s Addiction have reformed, relapsed, split up, reformed again, split up again and now, living clean, it seems they’re back to stay. The only change to the original line-up is bassist Chris Chaney, but he’s now been with them since 2003’s Strays.

Ritual De Lo Habitual was therefore an album born of excess. It’s Jane’s Addiction at their highest (literally!), and the record that Dave Navarro can’t recall making due to heroin use.

25 years on, Ritual De Lo Habitual still stands loud and proud as one of the best alternative rock albums of all time, and in celebration Jane’s Addiction are performing a “silver spoon” anniversary tour with dates across Europe and the US.

Tonight’s support comes in the shape of Canada’s Monster Truck who do a great job of warming things up. A refreshing sound of “no-sub-genres-required” classic rock’n’roll. Very much the real deal and served straight up – just like it says on the tin. 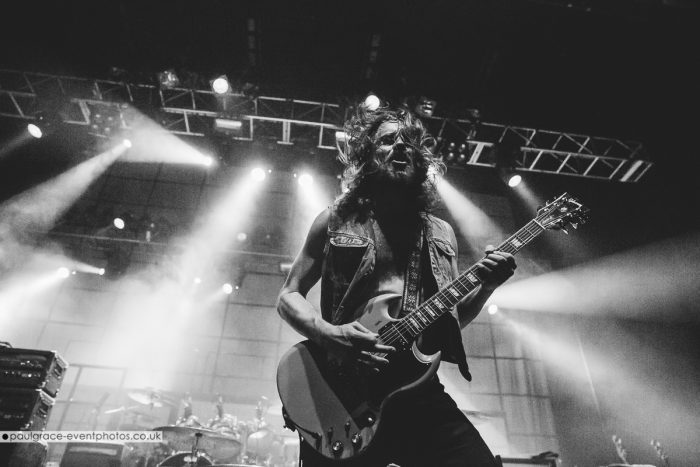 And on to the reason we’re here – Jane’s Addiction.

A guitar riff screams through the PA and Jane’s Addiction explode onto stage with a fiery ‘Stop!’. Navarro is the ultimate vision of rock’n’roll cool: tattoos, black leather and with a foot-on-monitor classic guitar pose, while Farrell is all-shades-of-shimmer flamboyance in sparkly sequinned suit and matching wide brimmed hat. Truth be told I’m a bit gutted he’s not wearing a flowery frock…

The stage appears to consist of a curious mixture of Japanese style modular platforms baring scantily clothed girls grinding up against each-other. 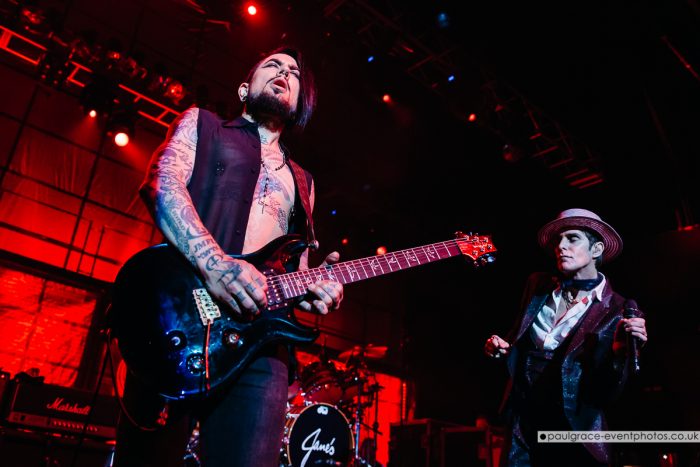 Ritual De Lo Habitual is played in its entirety. Like a dream, the swirling gorgeousness ‘Obvious’ rolls in, while the track everyone knows them for, ‘Been Caught Stealing’, gets the crowd jumping.

A rumbling bass-line indicates the start of ‘Three days’; Farrell’s intense 11 minute rollercoaster tale of threesomes, sex and drugs. A song inspired by his former girlfriend Xiola Blue, who, when visiting New York for her Dad’s funeral, spent 3 days with Farrell and partner Casey Niccoli “in a haze of sex and drugs”. Xiola later died of a heroin overdose. Starting slow and low with a spoken vocal, the tension builds steadily as the story unfolds, and peaks with an almighty climax fused together by Navarro’s majestic Metallica-esque thrash riffs. A magnificent ride. 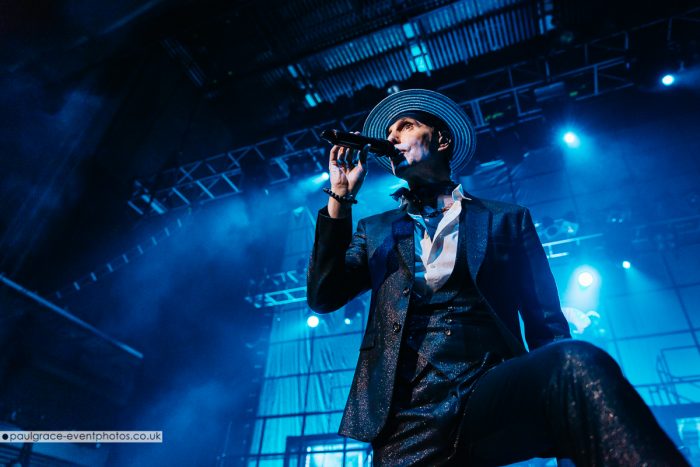 The tales of dead continue with ‘Then She Did’; Farrell’s haunting ode to his mother who committed suicide when he was 4.

Throughout tonight’s show Farrell’s voice is full of his usual screaming passion and only enhanced further when using his trademark effects box located to his side.

‘Classic Girl’ brings Ritual De Lo Habitual to a beautiful close. They then deliver a solid selection of tunes from their 3 decade career. ‘Mountain Song’ sounds as massive today as it did back in 1988, ‘Just Because’ takes the roof off, and there’s a respectful nod to Bowie with a riotous interpretation of ‘Rebel Rebel’.

During the tribal atmospheric spookiness of ‘Ted, Just Admit It…’, a couple of suspension performers swing high above the crowd, tethered to ropes only by bars inserted through the flesh of their upper backs. It makes my skin crawl but then it’s meant to, enhancing the macabre ambience of the track.

Tonight’s encore predictably takes the shape of ‘Jane Says’; the tune that started it all, with a smiley Stephen Perkins on steel drums and even more backing dancers strewn across the stage. 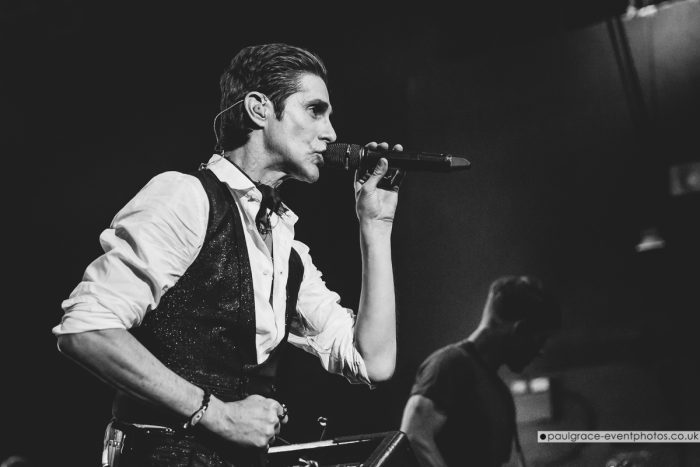 The 2 hour show flies by and the boys well and truly deliver. It might have been nice to see a stage set comprised of some of the relics and artefacts which appear on the front cover of Ritual De Lo Habitual, but that’s just nitpicking.

Ultimately it’s a huge relief to see the demons have been well and truly exorcised and that Jane’s Addiction are getting on with what they do well. They clearly still very much have it – perhaps not as spontaneous as they once were, but by the same token definitely not predictable. There is now graceful composure in their performance, and moreover, what appears to be a genuine desire to keep on sharing their unique voodoo art. And long may they keep sharing!