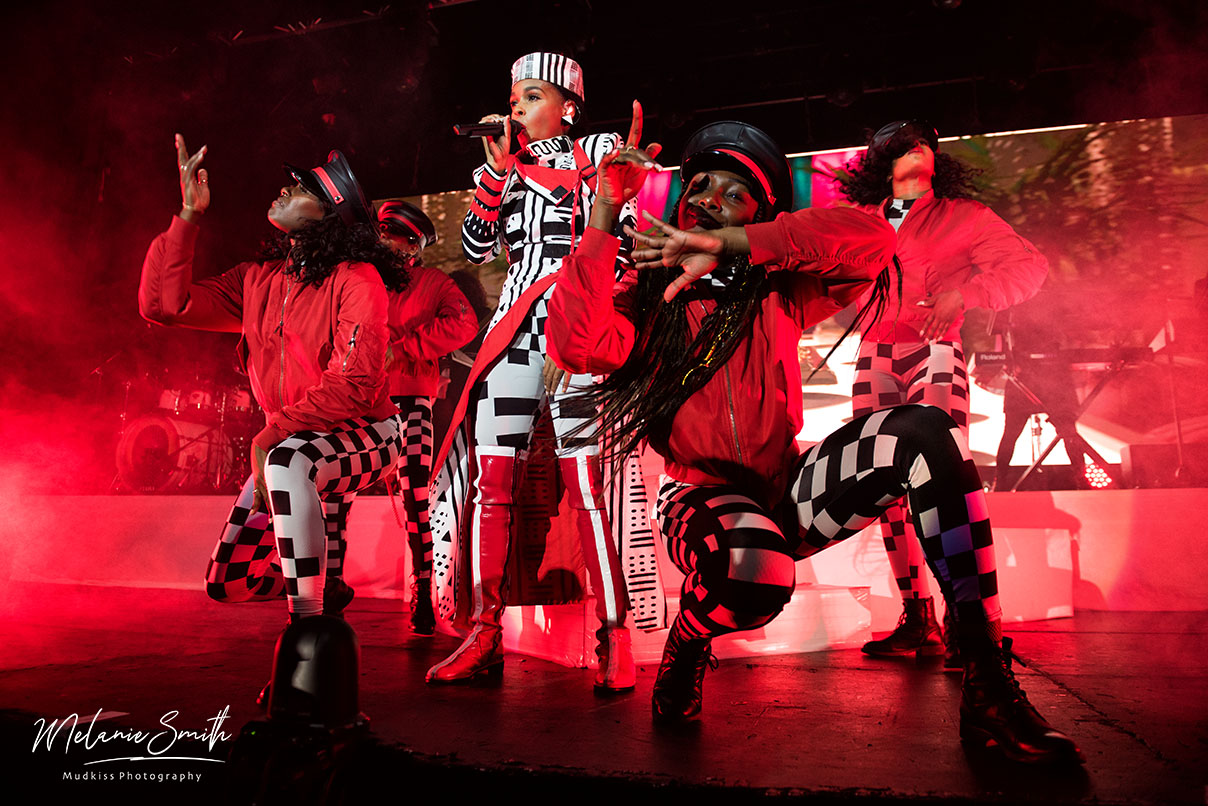 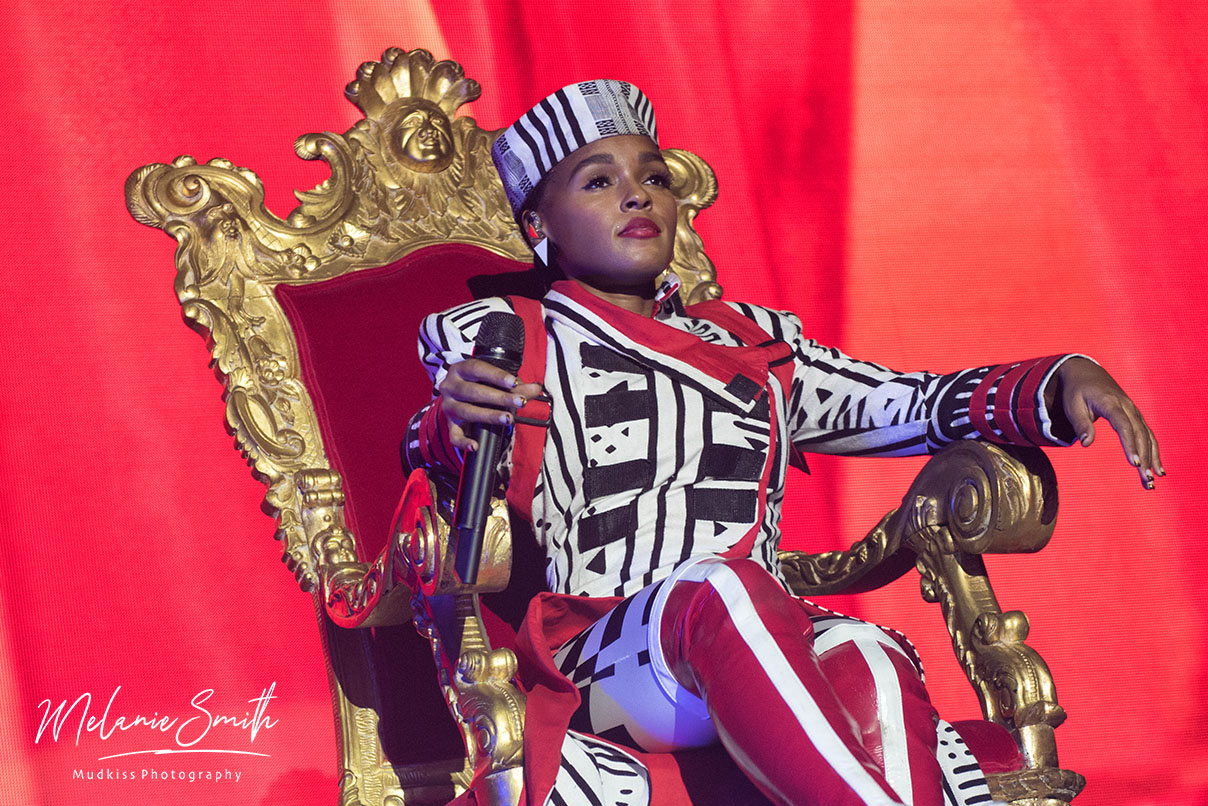 Janelle Monáe’s Dirty Computer logs on in Manchester during a brief UK tour.

When Funkadelic released their debut record, George Clinton proclaimed that he was not of this world. That he’d play with your funky mind. There is no need to be afraid. Janelle Monáe is not of this world; people should be afraid though. She’s dangerous. She’s taking names. She’s flying the flag for everyone; and that flag is coloured funky and bright.

Actor, collaborator, artist, musician, performer…..she is quite frankly one of the most talented people on the planet. Janelle Monáe’s Dirty Computer is an amazing accomplishment. Gone are the black and white outfits, and in are the multicoloured, multoayered and all round fun outfits both literally and musically.

As the heavy disco and funk of the DJ rang around the academy, the stage was uncovered by people in white suits. Janelle’s own Dirty Computers.

Also sprach Zarathustra was an apt intro for this space age show and performer. The crowd were wild as Monáe took the stage in typical pomp and circumstance in a dazzling red and white costume flanked by a huge screen that veered between distorted glitches images to scenes from her ‘Emotion Picture’ that accompanied Dirty Computer.

During the opening run of songs from Dirty Computer, Monáe showcased her skill as a singer but also as a rapper that can bring the fire, especially on the brooding Django Jane which saw her taking her rightful place on the onstage throne.

Whilst there was the visual aspect of the show, the stage was stripped back. A raised platform and five piece band flanking both sides of the stage, meant that Monáe and her four strong dance troupe could bring the songs to life with an array of costume changes and seductively suggestive choreography to accompany the risqué, free and liberated messages in the songs. 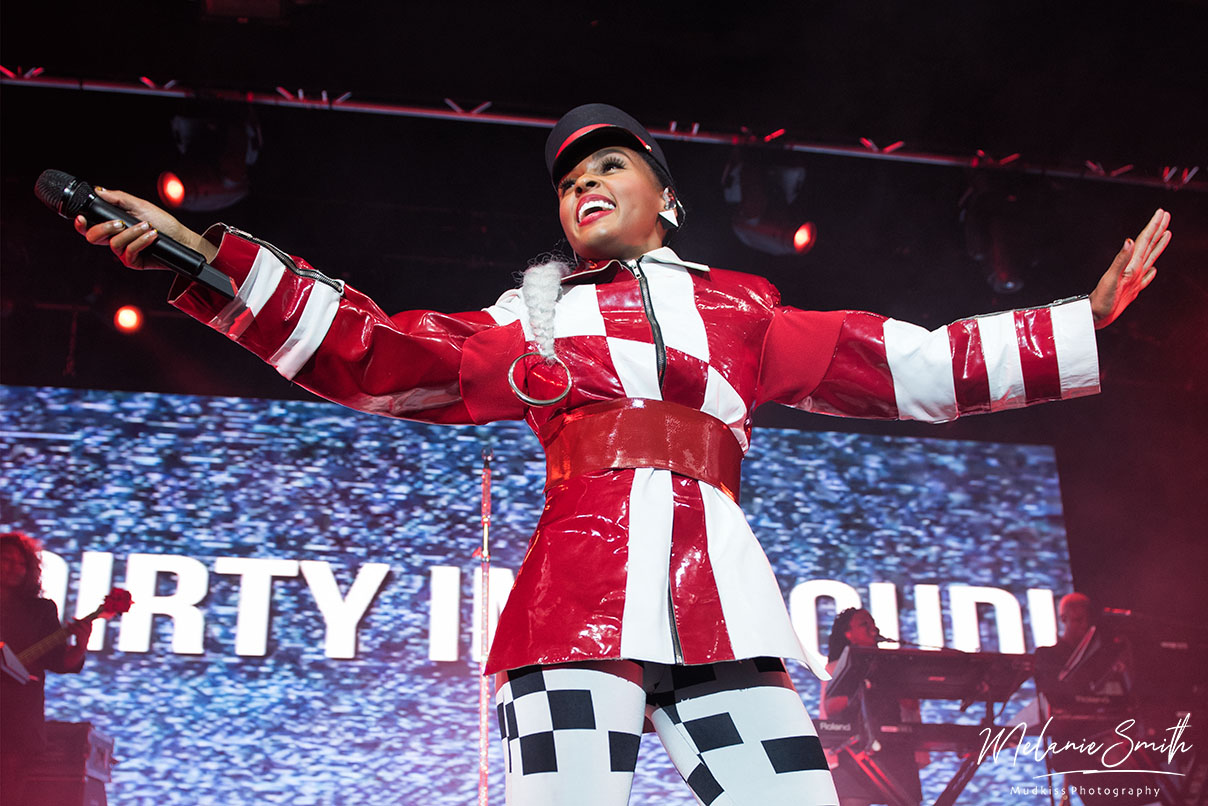 The rapport with the crowd was second to none throughout. Trips back and forth to her mini stage meant that her trips to the front meant the crowd went insane every time. A chant of ‘I’m Dirty and I’m Proud’ to the tune of James Browns I’m Black and I’m Proud raised the volume further. 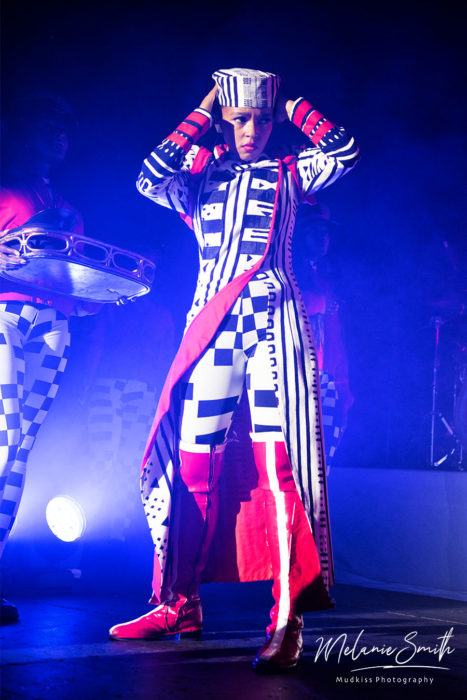 The Godfather of Soul wasn’t the only spirit in the room. A snippet of Purple Rain’s epic solo and vocal refrain at the end of Primetime was very ‘on the nose’ but perfect for this crowd and this artist. There was also a little synth interpolation of Funkadelic’s (Not Just) Knee Deep as Take A Byte came to an end with enthusiastic handclaps and the first of several guitar solos over the course of the show.

A trip back to older songs kept the party going. The Bass on Q.U.E.E.N. was monumental as the band swayed in time with the dancers before Monáe took to twerking to the crowd. Electric Lady was dedicated to all the electric ladies because they ‘get shit done.’ Messages of love and being loved and loving yourself were front and centre in all of Monáe’s interaction with the crowd; none more so than during the sassy I Like That. Monáe was completely empowering by encouraging people to embrace their uniqueness and allow their uniqueness to make people feel uncomfortable. As the song hit its outro, Monáe took to the front row picking out what she liked about the audience individually. It was one of many incredible moments of an incredible show.

One of Dirty Computer’s highlights is Make Me Feel. An extended introduction meant that Janelle Monáe could channel her inner MJ, doused in white light and slowly shimmering through the smoke laden stage clicking and body popping like an intergalactic hero. As the single opening synth hit, the stage was bathed in colour. Make Me Feel is all about colour and the colours people bring. It is utter joy in a song and deserves to be a pop song for the ages. I Got The Juice followed as people were brought up on stage to dance from the audience to see if ‘they had the juice.’ Manchester had the juice…and plenty of it!

After a riotous and soulful Tightrope finished off the main set before a single song encore of Come Alive (The War Of The Roses) kept up the incredible tempo nearly two hours into the show. The guitar solos wailed, the crowd were unrelenting and Janelle Monáe proved that she is every inch a superstar that deserves a bigger platform.

Dirty Computer is, as a package, incredible. On record it sounds out of this world, but live, it is catapulted to a new frontier. This was an arena show in a small venue. Surely it can’t be long before Monáe is given the larger spaces to fill with her incredible mind and ideas to create an even bigger show? From the stage, Janelle Monáe commented that she feels like she’s only just starting the journey. I for one hope this is true; I’m all in for this journey as it is only going to get bigger, better, bolder and more brilliant. Those that were there in Manchester were treated to an unforgettable night.