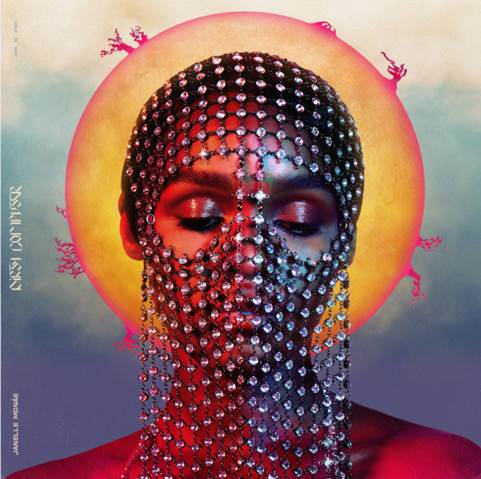 With a CV that is ever growing and a seemingly endless list of talents, Janelle Monáe has delivered an album that will bother many an end of year poll this year.

Dirty Computer is a remarkable album full of catchy pop hooks, danceable beats, lyrical and thematic liberation and a range of sounds that keep things exhilarating throughout. The music has also been set to an “emotion picture” of the whole album which is available on YouTube. It’s clear to see that this record has had an awful lot of thought and consideration given to it; it’s more an event than just another album.

The emotion picture, produced by Monáe, is a vibrant, visually stunning narrative incorporating a number of the celebratory music videos that accompany the album itself. The 44-minute “Emotion Picture” tells the extraordinary story of a young woman named Jane 57821 (portrayed by Monáe) who is living in a totalitarian near-future society where citizens are referred to as “computers.” Acclaimed actress Tessa Thompson (Avengers: Infinity War, Selma, Creed, Thor: Ragnarok) co-stars.

Additionally, Dirty Computer features the legendary Brian Wilson – as well as appearances from Zoë Kravitz , Pharrell Williams and Grimes. The diversity of these guests says a lot about the album. Brian Wilson features on the album opener with his distinctly sunny harmony turning the light on as the trip begins. Crazy, Classic, Life chimes in with the constant thread of partying and breaking the rules. This is very much a theme that runs throughout – sexual liberation, partying, and above all; equality. The aesthetic of the lyrics are reminiscent of the great Mille Jackson.

Crazy, Classic, Life is one of many cuts that get engrained in your mind. Take A Byte, the guitar driven funk of Screwed and I Got The Juice (featuring Pharrell Williams) are all wonderfully catchy and should be sound tracking your summer. Make Me Feel was rumoured to have been worked on with Monáe’s mentor Prince. The synth sounds reek of His Royal Badness. The whole track is 100% Prince worship and the video for the song is absolutely superb. Image and choreography are rife in a way that Prince would have been proud of – it is a video that feels like it belongs to the golden era of MTV.

Along with the classic sounding pop tracks on Dirty Computer, Monáe delivers a blistering rap on Django Jane, and a heartfelt monologue on I Like That. Both are more downbeat tunes but this allows the lyrics to flourish. I Like That contains a gloriously beguiling chorus line.

Album closer, Americans, is a middle finger to America and the civil unrest and inequality that has blighted the nation in recent years, as well over history. Monáe sets out what she believes to make an American. It’s a triumphant end to a completely triumphant album.

Janelle Monáe is on tour in the UK in the Autumn with 3 dates; one in Manchester and two in London on 10th, 11th and 12th of September respectively.