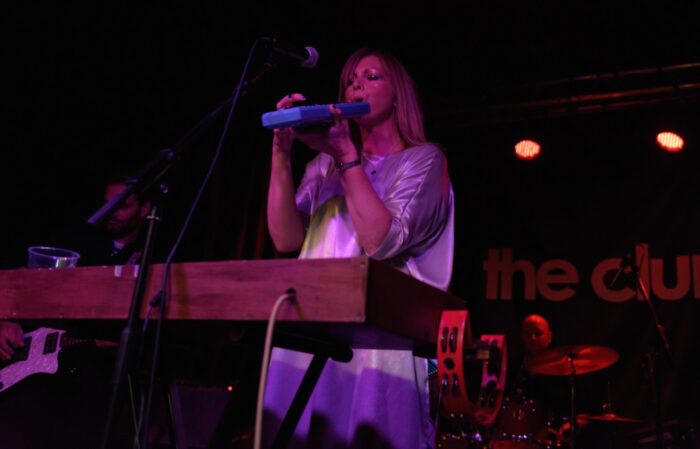 The eclectic pop songstress that is Jane Weaver, brings her incredible psychedelic disco party to Newcastle and leaves everyone longing for more.

Finally a return to Newcastle for the wonderful Jane Weaver, having released the incredible The Silver Globe last year she arrives in Newcastle on a sea of high praise and rightfully so. This psychedelic pop gem is a truly wonderful record; her distinct sound is understated,beautiful and otherworldly.

However, there is the small matter of Liverpool’s The Sundowners. Forging their way in a landscape littered with similar bands, The Sundowners stand out with their bright upbeat Psych-Folk. Harking back to a more traditional sound, the excited vocal interplay between Fiona and Niamh sits atop a bed of swirling guitars.

Whilst their sound does bare resemblance to the traditional, they’ve funked it up quite a bit which gets the amassing crowd up and dancing early on. Yet it is the perfect way to start the evening, and as Jane Weaver takes to the stage things go from strength to strength despite some technical issues early on.

Not wanting to dwell upon that, with a set based heavily around The Silver Globe there was a lot to be excited about. With a record that is truly unique and drawing from a number of sounds, it’s a wildly varied set with disco infused freakouts that make your feet itch. Slower numbers have you swooning along to the melodic beats.

There are obvious pop gems, such as Electric Mountain and I Need A Connection that don’t fail to disappoint, yet the whole set is one trip across an otherworldly musical landscape. With sporadic injections of excited bleeps, beats and pumping synth lines augmented by funky guitars. However, the highlight is the beautiful Mission Desire, this atmospheric track with ethereal vocals and sweet synths has us in complete awe.

Overall though it’s an incomparable set filled with twists and turns, and the only issue was that there couldn’t be more of it. Jane Weaver truly brought the eclectic disco party to Newcastle tonight, and she left everyone wanting so much more. That’s not to her detriment though!

~
Jane Weaver can be found online here janeweavermusic.com. She is also on Facebook and tweet as @JanelWeaver.