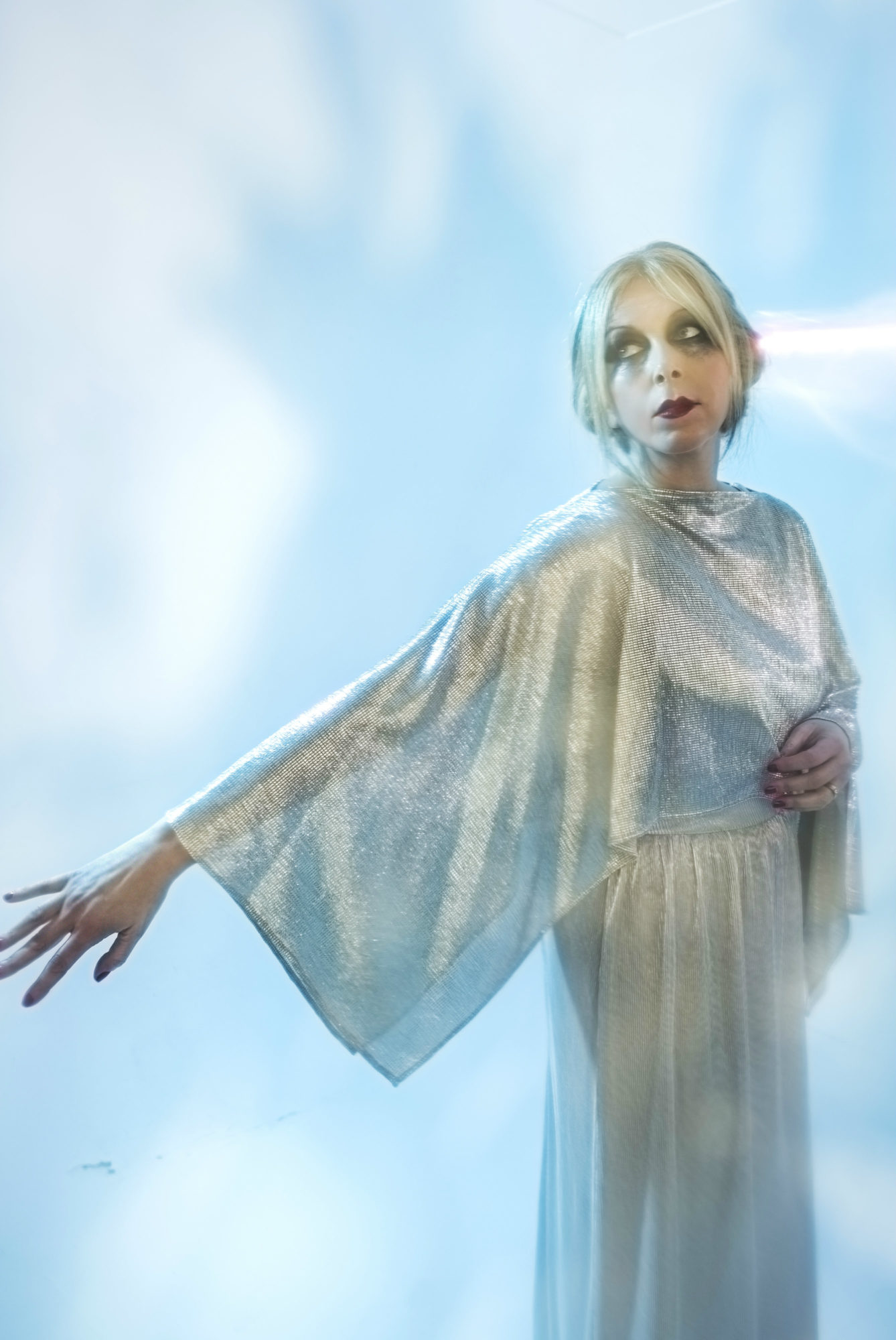 Jane Weaver should really have been chosen to provide the soundtrack to Matt Damon’s character’s experience as a castaway on Mars, as he navigated outer space to the somewhat cringe-worthy tunes left behind by his space-mates heading back towards planet Earth.  Alas, The Martian film is purely make-believe, but kraut-rock musician Weaver defiantly plods on, composing the songs you just know are going to provide futuristic accompaniments to the best sci-fi films not even conceived.  An artist who appears to transpose magnetic fields, solar activity and invisible galaxies into something robustly tangible – if whimsically surreal at the same time – it’s no surprise that Weaver has drawn on her sixth sense when writing and recording new material, as her latest record testifies.

“Islands are powerful…” Synth-pop artist Jane Weaver reflects on the surroundings that influenced her latest and sixth studio album, Modern Kosmology.  Herself, if only metaphorically, an island of her own. Tending not to yield to the pressures of conformity, she has created soundscapes that appear to transcend time and space itself. Her 2014 album The Silver Globe was largely inspired by a Polish sci-fi anti-communist film which was subsequently banned by the government at that time (the film, not the album).

However, it was while killing time (albeit in a very choice way) while waiting for her passport to be renewed on an outing to the Tate in Liverpool, that Jane Weaver, Widnes-born, synth-krautrock modern-age pioneer with nearing on three decades of musical experience behind her, including former bands Kill Laura (heartily endorsed by John Peel) and latterly, Misty Dixon; that revelations from bygone eras emerged.
“When I hear or see songs, I get this picture in my head. It’s almost like a scene from a film or a vignette. It normally happens when I’m really confused or busy…” Jane explains.
This one particular visit to the aforementioned art gallery proved a catalyst for reconnecting with the ghosts of her forgotten years – during which time, Jane Weaver was herself a visual artist. A painter, to be precise. Upon discovering a potent exhibition of work showcasing rare finds, produced by some of history’s most avant-garde female artists, one maestro remained vivid in her mind.

“I’m fascinated by the process of creativity. Where do vivid ideas come from?”

“I discovered an artist called Hilda af Klint. A Swedish spiritualist painter, active in the late 1800s and early 1900s. She was the first, known abstract painter and nobody knew a thing about her. Her work emerged forty years after her death, and apparently she stipulated in her will that no one should see her work, because of its unusual and progressive nature.” Jane recalls.
Using séances to channel the invisible energies in the universe, Hilda af Klint tapped into the essentials of existence itself – stripping away the superfluous distractions and centering on that kernel of truth. In doing so, her paintings reflected another dimension.

“I’m fascinated by the process of creativity. Where do vivid ideas come from? How and why do people create? Modern Kosmology is the study of the history of the universe, or, my way of looking at it, is the study of your own universe. How you can use energy from your own experiences and transform that into something good, and productive.” Jane expands further on the impetus behind her latest record.

Modern Kosmology is Jane Weaver’s sixth studio album as a solo artist, though technically the term ‘solo artist’ is a red herring, as Jane frequently seeks out souls to collaborate with – including Andy Votel, Damon Gough (who lends his guitar playing to Don’t Take My Soul from previously released record, The Silver Globe) and synth expert Suzanne Ciani. The album features heavy guitar reverb, obscure string machines, synths and haunting vocals, of which Jane has become so widely known for. Guest vocals feature Can’s Malcolm Mooney, and the album was recorded entirely on all-analogue vintage machinery.

Collecting cassette tapes as a child, it was on her fifth Christmas that Jane received a Kate Bush cassette, given to her by her Dad – one of those life-affirming moments, the seeds of the future being sown.

“I used to watch Kate Bush on TV programmes as a kid, and my first album was on cassette. We had a record player at home but Dad was really into cassettes, and vinyl was a bit of a luxury. I saw her on her recent tour, it was funny as we had seats at the front next to David Gilmour, and one particular super fan from Canada who had been to loads of shows. I was so nostalgic, to see her live, having listened to her since I was a child, I couldn’t help crying!” Jane recalls.

Upon hearing Jane Weaver sing, those early influences do creep in, with echoes of that dreaminess, the meditative tones are reminiscent of certain Elizabeth Frazer, a hint of Lisa Germano and Natasha Khan. It’s quite possible that gloom-pop artist, She Makes War has been heavily influenced by Jane herself, not only in vocal personality but in the freedom afforded by being a multi-instrumentalist, pushing through conventional boundaries and not being afraid to test-ride a whole range of quirksome, sometimes medieval instruments. Jane has a vocal range that would possibly make Kate Bush’s eyes water (recommended track: Don’t Take My Soul).

“I had put myself in an artistic prison, putting up barriers to my own creativity…”

Whereas The Silver Globe began as a concept album, with the title track being sampled by Coldplay on their track Another’s Arms, and earning Jane a new fan base, Modern Kosmology didn’t evolve as a set vision, yet was completed in half the time. The difference being, the intensity of the writing and recording process was magnified – with both time and resources acting as natural limitations. Something which Jane admits is a liberating constraint when compared to her experiences of working with seemingly infinite budgets back in the 1990s when her band, Kill Laura, were signed to major labels including Polydor and Manchester Records.

“A budget back then was phenomenal. They threw a lot of money at you if you were an indie artist. When I went back to being independent and having to do everything on a tiny budget, it really helped to realise what you can achieve within certain remits.” Jane says.

Jane has worked with Twisted Nerve, David Holmes and Andy Votel, to name a few, and has always maintained an autonomous approach to her work.
“Creative freedom has always been important to me. I had put myself in an artistic prison, putting up barriers to my own creativity, wondering which direction to move in. I began experimenting more with sounds and being open to exploring new instruments. Modern Kosmology started as a garage band album, to be honest. I demo a lot of tracks at home, but when I really need to concentrate, I’ll go to the studio.” Jane explains.

Recorded across eighteen months, Modern Kosmology took shape when Jane spent time in the Outer Hebrides, and rural Anglesey, in Wales. Something about the electricity of being so close to nature at its most wild and bleak, became the life-blood for the lyrical components of this record.
“I did spend hours just walking, on this island in the Outer Hebrides, surrounded by the ocean. It was quite a magnetic feeling, to be stuck there, in the middle of the sea. Islands are a powerful thing…” Jane recalls.

Certain tracks evolved through a playfulness that came about through digging into a makeshift, home-baked orchestra, trying out new instruments and allowing ideas to evolve. You Are The Architect and Slow Motion both subscribing to this method. Proving that an entire wealth of magic can be lost if we are to be so narrowly focused on a set structure or formula from which to compose.

“For this record, I kept a lot of my chunky guitar and bass playing and set about repairing it in the edit process. It can be too easy to make it all sound perfect. I did all the synths myself. I over-track everything so much, and then I’ll strip it back. Ultimately, only certain takes make the cut.” Jane explains the recording process.

Modern Kosmology is currently out on Fire Records, and Jane Weaver is currently touring throughout Europe.  She headlines Manchester’s 02 Ritz on 30 November, with She Drew the Gun in support.  We’ll be catching up with Louisa from the band, in the not too distant future, so watch this space…!

All words by Melz Durston

More interviews by Melz can be found here