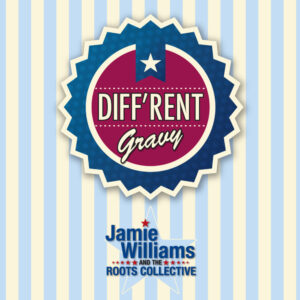 Essex based combo Jamie Williams & the Roots Collective have been steadily gigging and recording steadily since 2010. Built around the core duo of Jamie Williams and Nick Garner, their sound encompasses all good components of roots music.

Their latest album Diff’rent Gravy sees them play a mix of bluesy garage rock which wouldn’t have made them sounded out of place on a sixties package tour slotted between The Small Faces and The Who.

Starting with an energetic take on the Bo Diddley beat titled “Little Black Book”, the band then moved to more soulful pastures with “I Don’t Want to Break My Baby’s Heart” where James’ voice provides the icing on the cake. “One Man Mission to Mars” will resonate with many in these dismal times while the bluesy “Lonesome Howl from the Heart” uses a familiar template but does it with style and energy. The excellent “Godsend” built around a catchy little guitar lick could be to Diff’rent Gravy what “I Want You” was to Blonde on Blonde, a breezy pop tune with substance and a great set of lyrics. The band jump easily from the classic rock riffing of “Bad Ass and Lazy” to the more atmospheric “Reaching for the Star” with its memorable chorus. “Saved” broods and meanders like a later day Tom Petty track (circa Echo) and “Bastard” sees them fully justify their Roots Collective moniker being a rollicking ditty that meshes blasts of harp with mandolin. “Voodoo Man” rocks with aplomb and “Understand” closes the proceedings on a gentle note with some great harmonies and really nice guitar work (great arpeggios).

News on Jamie Williams & the Roots Collective can be found on their official website: www.jwroots.co.uk. They are also on facebook.