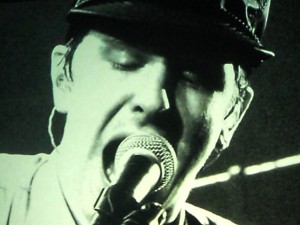 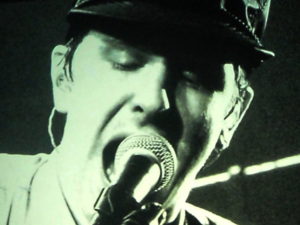 Earlier this year Jamie T returned after a four year absence with his third album, Carry On The Grudge. The inevitable live shows that followed included a couple at Ally Pally last weekend, from one of which Louder Than War’s Keith Goldhanger reports back.

Jamie T’s gone a long way since we first spotted him nearly ten years ago dangling his legs off the front of the Camden Barfly stage thrashing away at his fucked up acoustic guitar in front of a handful of punters.

Most of these songs are still in evidence tonight but there’s thousands here to witness this show and there will be once more when he does this again in this same venue 24 hours later.

A big crowd in a big room celebrating his third album and a return from a five year break that we’re already beginning to forget.

Half a decade isn’t that long if you’ve enough distractions at hand to help pass the time but it was long enough to ask out loud more than once where he was and for most of us get little response.

There was good reason why we missed him.

You don’t just release not only one of the finest Britsh debut albums of the last decade and then equal it with a follow up a couple of years later and then just disappear….
…and we worried that once he returned there was no way we’ll get a third classic surely?
Well maybe we did, we’re still letting the clock tick on a bit more on this accolade but this is still some achievement.

The second snippet we were given from this third album going by the name of “Zombies” may quite possibly be the first thing a new generation of music lovers may have ever heard by this man, therefore what a treat they’ll have when they realise there are two previous albums to catch up on. This tune is an indie classic already filling the dance floors across student union bars across the country in 2014 and swaying DJs into dropping “Sheila” “If You Got The Money” or “Salvador” and that surely is a good thing even if it gets some of us to sneer, shrug and say you don’t like songs as much that are not about emotional ruin, tragedy, empty beer cans blocking up the doorways, ruined relationships and complain vocally that it’s Jamie T’s “Rock the Casbah” (The same fuckin’ Clash that sung “White riot” we used to moan !!….. Good heavens you boys)…

“Trouble” may sound a bit like the Arctic Monkeys but everything else is pure simple grown up Jamie T and on a par with everything else we ever wanted and waited so impatiently for since he went away.

We get all these classics tonight.

“Sheila”, “Zombies” and “Sticks And Stones” end the evening that has been preceded by not just every decent song in his repertoire but by an amazing performance by SLAVES and a superb opening slot from HOLLIE COOK.

As far as big sheds in London go, Alexandra Palace is a great venue. Food stalls, a Real Ale bar and a bloody decent Beat Boxer CONTRIX entertaining the hoards as they enter the venue. This young man looks about 12 years old (he’s 21) and arrives in between acts in the bar area and is astonishing. Well he should be considering further research tells us he’s this year’s UK beat box champion. A nice touch which adds to the event that doesn’t just feel like a big gig in a big venue. It’s more like a mini festival in here and it’s noticeable that there’s not a space behind the bar to fit any more staff thus rendering some people to take too much advantage of the Real Ale bar in particular without a long wait to spend one’s shillings.

Hollie Cook opens with “Ari Up” a tribute to the late Slits frontwoman and the rest of the set reminds us that many years ago outside this hall one man witnessed his very first London gig outside on the grass watching said band. Hollie’s music is refreshing and a lot more subtle than that of The Slits (for whom she played with for a while) and has turned the early signs of winter into lunchtime on a warm summers day.

SLAVES remind us of one of those old punk rock bands we used to witness in Wapping squats back in the early 80s who were (probably) called things like “Anaemic arse rabbit” who would turn up so pissed they could hardly stand up, play their set then throw up before jumping over Tube barriers in order to get them home. Slaves have nicer clothes and appear sober. Their short sharp tunes are superb slices of punk rock that need to be heard. They’re a duo and it’s not like they actually sound like there should be half a dozen people playing alongside them (like Royal Blood for example) this duo actually sound like a duo and write pretty neat tunes that leave us wanting more.

More, in the name of “Beauty Quest” which is omitted this evening and leaving one man asking out loud to no one in particular how a band such as this can commit such a sin. Well I suppose this now leaves me wanting to see these again which may be was the intent. It worked.

“Girl Fight” is preceded with a story about how vocalist and drummer Isaac Holman witnessed such an event in his Kent hometown. This intro, along with the story about how “Where’s Your Car Debbie” took shape takes twice as long to tell than each song is. It doesn’t matter really, this set of songs is, as one of their tunes says, a thrilling white knuckle ride.

Jamie T enters to shrieks, cheers, pushing and shoving before even a note gets played. Some of the 7,000 here may not have ever had the chance to see this man previously. Others cannot simply believe they’ve waited so long for this again without giving up. “Limits Lie” is the perfect opener, the first of a continuous string of sing a longs not just from the recent “Carry On The Grudge” album but from the two before that. By the time he hits the first string it appears that everyone knows this is “Salvador”, we get a short smirk from the man, standing side on, foot on monitor, baseball hat still yet to be removed and a knowing look that is aware that this is still just the beginning.

The Specials are playing at the Roundhouse this weekend. Many may have been lucky to see both shows. Jamie T’s set list of classics can be closely compared. One classic after the next. “So Lonely was the Battle”, “368”, “If You’ve Got The Money” “Emily’s Heart” and a fucked up fantastic acoustic version of “Calm Down Dearest” before the aforementioned trio of classics send us home looking over the city from the high terrain of the capital, reminiscing and trying to work out where exactly in these grounds that Slits gig was all those years ago as people leave pointing downhill at the city lights screaming Larnadaaaarrrrn.