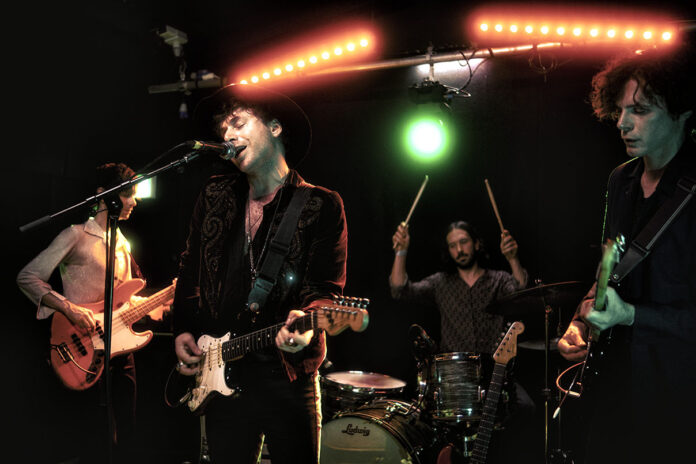 Jamie Perrett has been through a few evolutions already. You may have a favourite incarnation – maybe the viciously literate frontman of Love Minus Zero, or the subtler, more gothic vibes of Strangefruit? More recently he’s been a driving force in dad Peter’s solo revival, acting as producer, lead guitarist and occasional songwriter on two albums and subsequent tours.

Now he’s simply being himself, albeit with familiar companions. Bass-playing brother Peter Jr. has been there throughout, and Eliot from the LMZ days has returned on rhythm guitar. You can hear echoes of Jamie’s recent work with dad on the first two singles, melodic rockers that barely conceal darker emotions. Both songs are decent on record, but tonight they really take off. ‘Angel of Santiago’, opening the show, is infused with passion and power. The encore of ‘Masquerade of Love’ is even more of a revelation, going from wistful doo-wop to a full-blown roar. Imagine ‘Teenager in Love’ blooming into a raw-assed Sun Sessions creation and you’re getting the idea.

The rest of the set promises a fine debut album. There are big-hearted major key numbers like ‘The Baying Mob’ and ‘Poetic Justice’, and scuzzier confrontations a la ‘Personality Test Freak’ (jolly decent of the late Mark E. Smith to pop back and give him the title for that one). If you want anthems, we got ‘em too: ‘Be Warm, Be Well’ is a lullaby with a chorus that strains for the sky, and gets there.

He may not look a day older than the young guitarist who thought “sod Babyshambles for a game of Russian Roulette” and went off to make his own musical journey, but Jamie’s accumulated a lot of musical smarts over the years, and this is an unsurprisingly sharp band, switching mood and style sensitively. For a short while in the middle of the set things seem to lag, to get a bit medium-paced, but then they ramp it up again and finish with four big songs. These boys know when and how to hit hard. ‘Mind’s Not Right’ ends the set with an onslaught of wah-wah and leaves me wanting more. Tonight, that “more” was a soaring encore. Tomorrow… who knows? It’s unlikely to be dull.

Photo by The New Athens Media

All words by Stuart McLachlan whose author profile is here