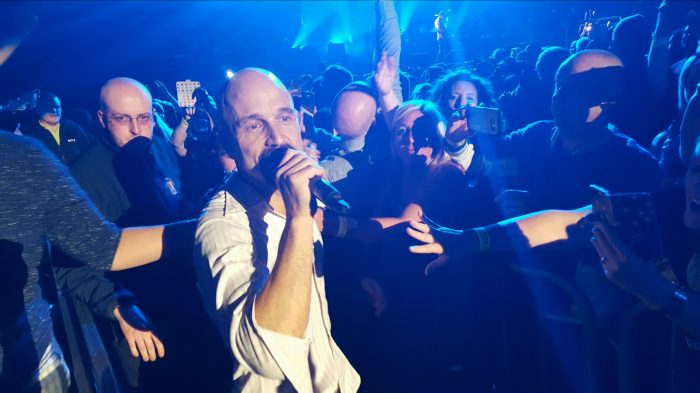 As two bands so strongly linked with the city of Manchester descended upon Liverpool’s Echo Arena, Louder Than War’s Michael Halpin went along to take it all in.

The Charlatans: Although some debate may have ensued regarding who should have been headlining this double header between James and The Charlatans, The Charlatans opening trio of songs argued a strong case to suggest that the running order was indeed incorrect.

‘Weirdo’ recalled just what The Charlatans do best – playing the underdog and coming out on top. ‘North Country Boy’ is such a crowd pleaser that it was never likely to fail while ‘Just When You’re Thinking Things Over’ grooved along defiantly giving the impression, for the moment at least, that the core of what makes The Charlatans great is still very much intact. Further to this, ‘Just When You’re Thinking Things Over’ was sung with such purpose by the seemingly ageless Tim Burgess, that despite nervous breakdowns, drug abuse, financial embezzlement, jail sentences and the untimely death of two key members, The Charlatans really do appear to be indestructible. Moving into ‘So Oh’ from last years ‘Modern Nature’ album lost the audiences attention however, while ‘Blackened Blue Eyes’ and ‘Let The Good Times Be Never Ending’ did not do enough to win them back, in spite of Tim Burgess’ efforts.

Like ‘North Country Boy’, ‘One To Another’ and ‘The Only One I Know’ were only ever going to gain a positive reaction and of the bands newer material, ‘Come Home Baby’, which followed, faired the strongest.

Following ‘Come Home Baby’, Tim Booth and Andy Diagram from James joined The Charlatans onstage. It was all big hugs, big grins and backslapping before Tim Burgess introduced the number they were about to perform as being “by four lads from Liverpool who shook the world”.  One instantly knew that this was not going to be a Beatles cover, that would be too easy.  Instead, the audience was treated to a version of Echo and The Bunnymen’s ‘Rescue’ which disappointingly seemed to be enjoyed far more by those on stage rather than the audience.  As ‘Rescue’ briefly morphed into The Doors ‘L.A. Woman’, much was won back and at this point The Charlatans created the most musically powerful moment of their set. Typically concluding with their usually anthemic ‘Sproston Green’, this performance appeared to be slightly lethargic and it felt, to a degree, like the band were going through the motions. Closing your set with the same song for pretty much the last twenty-five years may well do that though.

One of The Charlatans strengths has always been their ability to win over an audience that has not been solely theirs, and despite such a promising start, that strength did not appear to be there this evening. 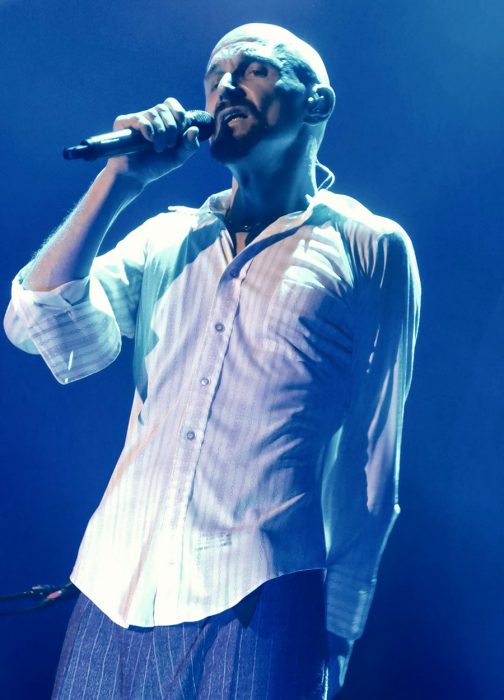 James: Aside from Tim Booth’s bizarrely oversized pants, the first thought when he opened his mouth at the Echo Arena was, ‘now there is a fella who can really sing!’ Contemporaries such as Tim Burgess, Ian Brown, Shaun Ryder or Tom Hingley have never come close to the vocal talent of Tim Booth and from the off it is clear that a) James have always been slightly different from other bands of their generation and b) there is absolutely no question whatsoever as to who should be headlining tonight’s gig.

Tim Booth’s vocals simply soared over the audience during ‘Waltzing Along’ and the immediate feeling is that watching an older and wiser James is a beautiful, uplifting and life-affirming experience.

Tim Booth’s zen-like demeanor contradicts his still wonderful dance moves, whilst he carries a grin that cannot help but give off genuine good vibes.  When all of these factors are in place, James are pretty much untouchable as a live band.

Following ‘Waltzing Along’ and a superb ‘To My Surprise’, Tim Booth decided that the aptly named ‘Surfer’s Song’ was the ideal opportunity for him to indulge in a good old crowd surf.  The strangest part of the whole thing was not that the fact that the 56-year-old can still carry off such a feat, but the fact that he can do it whilst still managing to sing perfectly in tune.

An extremely powerful ‘Ring The Bells’ showed that none of Tim Booth’s vocal prowess has left him. Just as they would time and again tonight, James showed how an exceptional pop/indie-rock band can make thousands of people feel like all is right with the world.  Even if it is just for ninety minutes.
The subject matter of ‘Moving On’, addressing the death of Tim Booth’s mother in 2012, would appear to be far removed from making an audience feel like all is right with the world, but as he articulated his feeling that ‘death is like a birth and can be truly beautiful’ the sincerity of his delivery won his audience over.  The fact that Booth’s band mates appeared to be keeping a watchful eye on him while he explained ‘Moving On’ only added further weight to the performance and even though he appeared to be communicating some very personal emotions to the audience, Booth appeared to be completely at one while doing so.  He certainly seems to be a man comfortable in his own skin. A beautifully executed stripped down version of ‘She’s A Star’ followed, while ‘Johnny Yen’ from 1986’s ‘Stutter’ brought a tear to a fair few eyes. 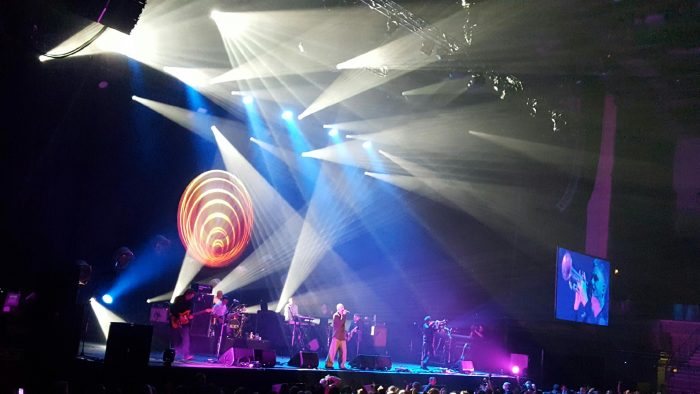 ‘Born Of Frustration’, without Tim Booth and Andy Diagram going walk-about within the audience would have been enough to lift the spirit of any crowd, but as Booth repeatedly cropped up over one side of the arena whilst Diagram the other, the audience  (the majority of which were forty-plus) were sent into something of a frenzy.
‘Getting Away With It (All Messed Up)’ and the anthemic ‘Come Home’ both proved that Tim Booth still has the moves and as the clock ticked by, Booth showed nothing to suggest he was running out of the energy required to perform in the manner he does; his youthful exuberance seemingly years away from leaving him.

Like ‘She’s A Star’, a stripped back ‘Just Like Fred Astaire’ worked wonderfully and began James’ encore in fine style.  Tim Burgess joined Booth and company for ‘Laid’ even though it was not one hundred percent clear whether or not he knew all of the words, before ‘Sometimes’ became one huge crowd sing-a-long.

Bravely, James ended their set with this years ‘Nothing But Love’ single and managed to pull it off majestically.  The heart, soul, emotion, verve and vigour that James communicated tonight meant that in many ways ‘Nothing But Love’ was the perfect ending to a breathtaking set.