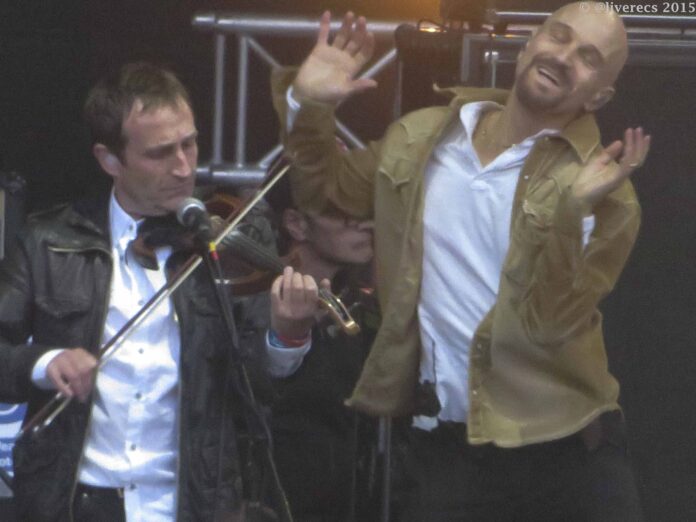 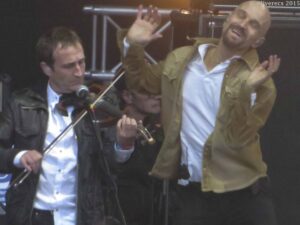 Six months after their last UK shows, and James are treading the boards once more. With this being the first of a summer of open air and festival shows, and without the usual warm-up gig, there were more than a few worries about whether the magnificent seven would be a little rusty.

There was the other elephant in the room, of course: the venue. With the stage being one side of a lake, forming a moat of sorts between band and fans, this was always going to be a ‘different’ gig. James live shows are famous for bringing people together; the interaction between band and audience is legendary. Particularly with passionate frontman Tim Booth, who regularly annoys security guards by placing himself right in the thick of the crowd. Apparently, there were plans to perform five acoustic tracks nearer the raked bleacher-style seating area, but technical and security difficulties put pay to that.

So how did they fare? From the opening bars of ‘Walk Like You’, from the most recent album ‘La Petite Mort’, it became obvious that the distance – however annoying – was not going to effect the performance nor the enjoyment of the crowd. An audience that had come from all over the country. With people meeting in the town centre, some whom already knew each other, some making new friends, all with the common purpose and intention: to have a bloody good time.
The weather was always going to be a worry (as it would be at any open air show), and as the week began with many places bombarded with torrential rain, one would be forgiven for having even more trepidations. As it turned out, the east coast experienced a wonderful heatwave and perfect gig weather.
As it was still daylight, the full lighting effects were lost for the early part of the set, which featured firm back catalogue favourites such as ‘Ring the Bells’, ‘Waltzing Along’ and ‘Hymn from a Village’ alongside LPM tracks ‘Curse Curse’ and ‘Interrogation’. Plus being the courageous lot that they are, they gave a new song that they are working on at the moment its first airing. Entitled ‘All About Nothing’, it was an decent if largely forgettable work-in-progress. A steady rhythm interspersed with a refrain of “Naaa-oooooh” – probably the only time during the night in which Tim seemed to be struggling to hit the right notes. Few bands would have the brass cojones to even attempt a raw song such as this, and hardcore fans would have overlooked such blips. James have always had a habit of ‘working through’ new songs in a live environment and they usually result in a completely different-sounding beast. It will be interesting to see how it develops over the next few months.

If that diversion left some of the lesser ‘rabid’ fans shuffling in their plastic seats, then the next tune, “One of the only straight love songs we have” as Tim describes it, had almost everyone on their feet and singing along. ‘Just Like Fred Astaire’ is, as always a brilliant live track that brings strangers together, all empowered and moved by the music. This emotion is carried forward when the band launch into a stunning rendition of ‘P.S.’, followed straight away by the rarely-played ‘Don’t Wait That Long’.

The full light show kicks in good and proper for an evocative run-through of ‘Sound’, and the should-have-been-a-massive-hit single ‘Moving On’. By the time the first chords of ‘Laid’ filter over the water, the audience are hitting fever pitch. The mass singalong continues with set closer ‘Getting Away With It (All Messed Up)’ – a theme tune of sorts which still to this day sums up the band for many. Indeed, it could be said that this gig fits perfectly with that motto. The band were unaware of the river/moat situation but still managed – through the power and passion of their music to build a metaphorical bridge across and connect with everyone present.

A triple encore followed, comprising of ‘Sit Down’ (returning to the set after its break last year – something that annoyed some of the fans who may only know the greatest hits), ‘Come Home’ and a rousing ‘Sometimes’. Slightly over curfew, there wasn’t the usual extended singalong finale to the song, although some areas of the crowd managed to keep it going for a few minutes before it was clear the band were not coming back. For their first proper live show of the year, the band showed very little in the way of nerves and the professionalism, musicianship and talent shone through like a super trouper in the darkness. Surrounding themselves with a crew of dedicated technicians helps greatly too, with the sound in particular surpassing expectations for the venue.

What could have been a disastrous day turned out to be the tonic the James faithful needed to keep them going before the main stretch of shows comes, starting with a headline slot at the Bearded Theory Festival. Many were already making arrangements to meet at further shows and keep in touch, and as the local pubs became havens for daisy T-shirts and kindred spirits, it could be considered a job well done. The seaside town may not have known what hit it, but everyone went away with a smile on their face and a spring in their step. Roll on the next show.

All words and photos by Martin Unsworth. More writing by Martin on Louder Than War can be found at his author’s archive.