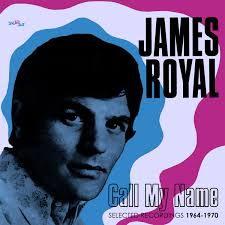 Round up of the best efforts by Ealing born Mod fav James Royal, including among the singles and album tracks his Mod floor-filler Call My Name…….LTW’s Ian Canty finds an almost forgotten artist whose stock unexpectedly began to rise in the aftermath of the 70s Mod Revival…..

In a lot of ways the story of James Royal (the Soul vocalist, not Ricky Tomlinson’s character in that sitcom) mirrored that of many an artist in the UK during the 1960s. Getting his introduction to pop music via the skiffle scene, he went onto front his own Beat band, went solo in the middle of the decade and released many singles that got radio plays but never quite made the leap into the official charts. His music was retrospectively discovered by Mod crate diggers deemed perfect for their shindigs and as such his music has become sought after years after the fact, which has resulted in this, the first issue of his material on CD to encompass his efforts all through the swinging 60s (and a couple of 1970 tracks to boot).

Being a tad older than his contemporaries, Royal had a three year stint in the Royal Air Force which interrupted his early skiffle based dabblings. On departing the RAF he found a changed music scene, as the Teds and Rockers were slowly being usurped by a smarter, younger set. This new phenomenon dug Jazz, Blues and the new Soul music coming from America, which suited James’ impassioned vocal style down to the ground. These were still the days when showing up and looking cool in the Soho area around Denmark Street’s “Tin Pan Alley” could get you “discovered” and so it prove, as James bumped into a certain Don Wilson who asked him to join his band the Skylarks. This band soon floundered but having this experience pushed Royal into starting his own combo the Hawks.

The highpoint of their career was getting to the final of the televised Ready Steady Win! competition in 1964 (won by the Bow Street Runners, with links to Fleetwood Mac, but that’s another story). After a period of uncertainty in 1966 Royal folded the Hawks and emerged as a solo artist in his own right (with a band called the Set backing him on live engagements). He recorded eleven singles and an album from 1967 to 1970, all of which missed out on the charts. By 1972 Royal had met his future Australian wife and emigrated with her to her homeland, bringing the veil down on his singing activities for the time being.

It appears from the excellent sleeve-notes that James Royal came back on radar after years of obscurity when the 70s Mod Revival began to fade. The folk still interested in the Mod image began to move away from the Punkish Revival bands and more towards the Soul/Jazz roots of the original 60s Modernists. The popularity of his waxings of this era and them going down a storm at new Mod discotheques slowly led to this new collection plus retrospective acclaim as the “King of British Blue Eyed Soul”.

James Royal himself has provided information and cuttings for this lovingly crafted compilation and on listening it reveals an artist at his best on rawer, earthier material. Rather like a slightly more restrained but far more danceable Joe Cocker, if you require a comparison. His 1964 efforts are pretty standard Beat Combo stuff, with the Garage Soul of Doug Sahm’s much covered She’s About A Mover and R&B rave up I Can’t Stand It (which he re-cut three years later too) being perhaps the picks.

Though fun to listen to, Royal really found his niche as a solo singer, giving him the opportunity to fully explore his Soul leanings. During this time he worked alongside two mainstays of the KPM library music team, the King of Hammond Alan Hawkshaw and producer Keith Mansfield, with songwriter Ralph Murphy penning a lot of the tunes. Call My Name was his first single on CBS and the song most identified with him today, a moody number replete with Rolling Stones style guitar breaks, bouncing brass and Royal’s grandstanding vocal assault. Though it missed the charts here and wasn’t even properly released in the US, it was a hit in South America and also France, where James and the Set toured on the back of it.

His work during this period seemed to come in two varieties: tougher cuts where backing musicians were given their head to run with things and more orchestrated, big band arrangements that verged on MOR Soul but almost always has some grit in there to take them away from being merely average. Hey Little Boy is a stylish piece of Pop with a soulful undertow and having I’ve Lost You sequenced straight after despite it being recorded a year later makes sense, as whilst being in a similar mode, the later song adds a great chorus which may have you scratching your head as to why it was only a b-side (beware a theme is approaching!).

My favourite song in the entire collection is another effort wasted as a flipside, this time on the reverse of I’ve Got Something Bad On My Mind (which is a pretty enough ballad with a nice mournful trumpet, but not outstanding). She’s Independent has lovely fuzz interludes between brass, Gospel backing vocals and a springy bassline, like a Freakbeat Soul ballad if such a thing exists. Perhaps it may have appeared out of time in 1969 but it is an original and fresh sound even today.

Again wasted as a B-side, the fast paced A Little Bit Of Rain is eminently danceable and dynamic, a real winner. It did however suffer a better fate than the mere album track You’d Better Run, which never even made it onto 7″ inch despite being a great marching dancer, with prominent female vocals contrasting superbly with Royal’s singing. Here he reminds me of Steve Marriott at his best. By the time we reach Sitting At The Station, which ends this compilation, one could be forgiven for musing how different his career might have been had all these excellent tracks not been consigned to only appear backing more lightweight attempts at the charts. This song is a lovely juxtaposition of freaky guitar and MOR Soul, which finishes the disc perfectly.

James Royal’s assured style, quality voice and full throttle delivery could have marked him out for Pop stardom in the 60s, but I suppose a combination of poor choice of single A sides and just the sheer amount of competition in the field at the time overwhelmed his efforts. Call My Name is stuffed full of extremely danceable and sometimes inspired Soul Pop and a real goldmine of rare should/could have been hits. A Royal mint for Mods I should think, ho, ho!