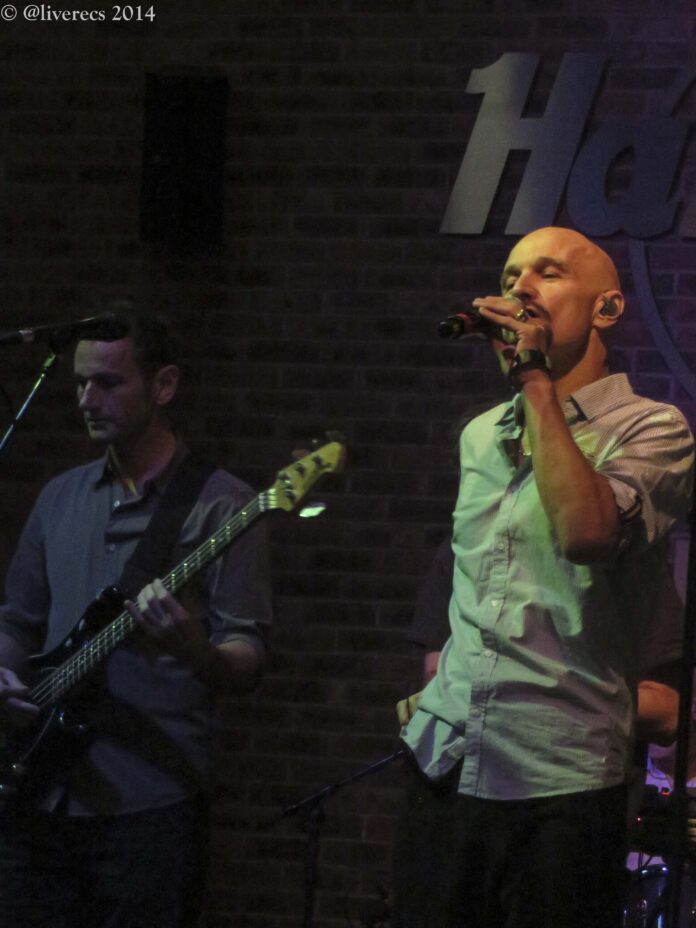 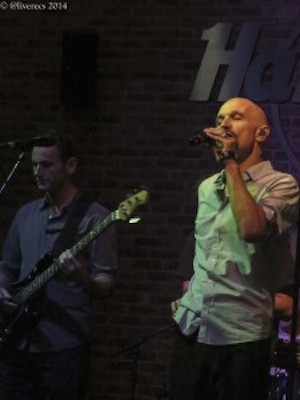 Following a very successful summer playing festivals around the world in support of their latest album, La Petite Mort, JAMES Come Home to a rapturous response for a free prize winners’ show at Manchester’s Hard Rock Café. Martin Unsworth was in the audience for Louder Than War.

Organised by Absolute Radio, by 7.30 the bar was packed, with excited fans clambering over seats and on the stairway to get the best view. Not that it was a struggle to see the stage due to the venue being so small. Forty-eight hours earlier, the band had performed in front of almost 70,000 at the Rugby Super League Final at Old Trafford. Tonight the crowd numbers around 350, but the atmosphere and excitement were so much more electric.

After a brief introduction by Absolute’s Pete Mitchell, a massive James advocate, the band open their set with an emotional double punch of Walk Like You and Moving On, both from the latest album, was a masterstroke. The former is a slow, brooding anthem and the later an upbeat celebration of death as being just part of a journey. Both send the crowd wild, and when vocalist Tim Booth mic cuts out, the throng just carry on and sing it for him, leaving him stood there agog, but loving every minute of it.

Straight from the new back to the old with a double whammy of Seven and Ring The Bells, and these classics sound just as fresh as the current material, but of course are welcomed like old friends by the faithful in front of the stage. As was the sublime P.S., which highlights Saul Davis’ stunning violin work. Rarely played recently, it’s a beautiful piece which wraps the crowd in a comfortable blanket of sound.

Unfortunately, the bad side of these freebie shows rears its ugly head when the band attempt to play All I’m Saying, an intensely personal song from the latest album. It’s a song during which Tim invariably struggles emotionally, and when the freeloaders in the balcony maintain their annoying chatter it gets too much for the frontman, “If you want to talk, can you fuck off outside”. It’s the scourge of modern gigs, the idiots who only turn up because it’s either free (they are usuallycorporate tickets/guest list) or they are there merely to be at the ‘event’. When they don’t adhere to Tim’s request, guitarist Larry Gott points to the balcony. A long, lingering look directly at someone who’s clearly not paying attention as he seems to hold the pose for over a minute, then mouths “Shut the fuck up”. It’s a frightening moment in which a different type of passion is displayed on stage, but the true fans welcome it, and it’s fantastic to see a band make a stand on this. Tim makes it through the song, but the emotion shows, on both him and the listening part of the audience.

Things move up a gear once more with a rip-roaring tear through Sometimes, which ends with a spontaneous singalong of the refrain, “Sometimes I look in your eyes I can see your soul”. You certainly get the feeling that Tim practices what he preaches as he stalks the front of the stage, holding the gaze of the crowd, no doubt relishing being able to see more people so close than at the usual arena-sized gig. The band joins in on with a coda of the song, bringing it to an end with a frantic crescendo.

Another newer song, Interrogation – performed without the usual ending – and a true Manchester anthem, Come Home, follow a fabulous Dream Thrum. A song that transcends its dance roots and still sounds a hundred times better and fresher than many of the more famous ‘dance anthems’ from the similar era. The band’s current single, and the nearest thing they have to an all-out dance track on the album, Curse Curse, is given a makeover, losing it’s techno keyboard intro. Whether this was on purpose or a technical faux pas (if so, it wouldn’t be the first of the evening), it gives the song a more guitar heavy sound akin to the version played during the tour last year. 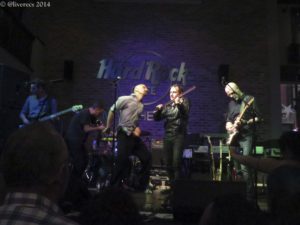 The audience are given a chance to choose the set-closer: a choice of Tomorrow or Top of the World. Two very different tunes, and we very nearly got the up-tempo former song, until it was found Saul’s guitar wasn’t working properly. So it was the latter played. A tender but rhythmic song it once again showcases the stunning violin work of Mr Davis.

Ofcourse the band are not let off that easy, nor does it appear that they wish to go home just yet, so they return to the stage for a run through of Say Something. A song sends everyone who was there for the music rather than the bragging rights into the night with a spring in their step, and a smile on their face. It’s not hard to imagine a whole lot of people with hoarse voices and aching heads the following day. But one thing’s for sure: they had a hell of a time, which they will remember for a long time to come. The November arena tour has a LOT to live up to, but no doubt, the band will dowhat ever they can to bring some intimacy to those cavernous, soulless venues. James epitomise what live music should be: raw; unpredictable; spontaneous, but most of all, accessible. There is something in these ‘pop songs’ that touch and move people like few others.Some day people will wake up and realise it. Don’t leave it too late.

~
James tour the UK in November, for more information head over to their website: wearejames.com. They’re also on Facebook and they tweet as @wearejames, @Larryontour and @RealTimBooth, @andydiagram and @DBayntonPower.

All words by Martin Unsworth. More from Martin can be found at his Author Archive.