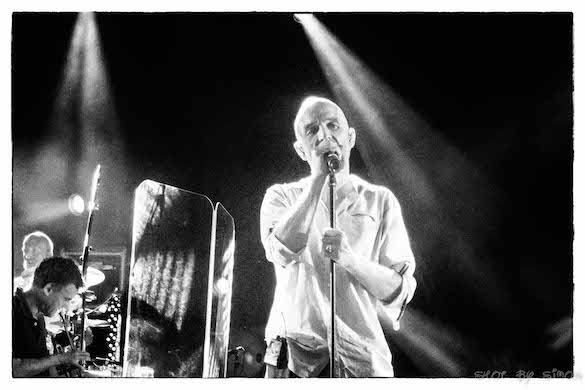 Fresh off the back of releasing their latest album, La Petite Mort, James had a hometown show last Friday. Louder Than War writer, Martin Unsworth, and photographer, Simon Lee, were in attendance.

When James front man Tim Booth walks on stage and says, “What an unusually beautiful summer evening in Manchester” he’s making no understatement. The anticipation of this, the second of the Summer in the City shows being held at Manchester’s Castlefield Bowl, had been high. The thought of the usual Manchester weather putting a dampener on things, or worst still the last-minute cancellation of the previous evening’s warm-up show in Oxford had ticket holders going through all manner of emotions. As it turned out, all fears were allayed when the sun well and truly put its hat on, and everything went without a hitch. The band themselves arrived on site early in the afternoon, and ran through an unprecedented one hour soundcheck, playing around twelve songs (now, that would have been a VIP session worth paying for.)

Opening act, Blossoms, an unsigned band from neighbouring Stockport, strutted onto the stage while many of the crowd were still in the pub, but the few thousand that was there witnessed a fantastic, energetic set from a bunch of youngsters who may well be the next ‘big thing’. Front man Tom Ogden looks like a young Bobby Gillespie, and has the confident attitude and talent to match.

Following soon after was main support Starsailor, back together after a five-year hiatus, and despite some reservations from certain areas of the filling crowd, went down a storm. James Walsh proved he still has a great voice, and even the apathetic in the audience were swayed by the amount of songs they had forgotten they knew. 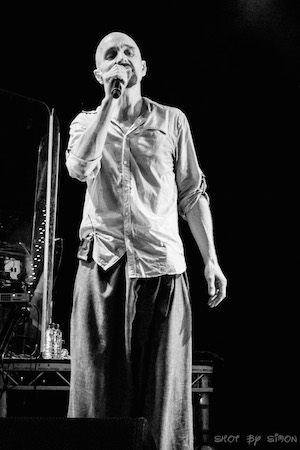 By the time James hit the stage, the majority of the capacity crowd is almost at the point of frenzy. The first night of this two-night ‘festival’ saw Pixies go down well, but was far from sold out. Yet James, deemed ‘uncool’ and ‘irrelevant’ by some quarters still obsessed with The Stone Roses or Morrissey, sold out this show in less than thirty minutes.

Rather than hit the boards bouncing, they ease into Out to Get You, its broody groove heightened by keyboard player Mark Hunter outside of his usual comfort zone behind a bank of electronics, playing a melodica upfront. This leads straight into the first of several songs from the band’s fantastic latest album, La Petite Mort. Moving On became an instant favourite with fans since it debuted on their last tour, and the faithful bounce and sing along to the anthemic chorus. An uplifting celebration of death and rebirth, it’s a classic already. Dave Baynton-Power’s thunderous drums driving the beat, giving a solid backbone to all the tunes, in what appears to be an effortless performance.

The first surprise of the night came with rarely played Heavens, which saw Tim head down to the barrier for the first time of the night, sending the security clambering into a panic. Another old favourite Ring the Bells sees Tim doing his iconic dance moves and the audience bouncing like rubber balls.

The beautiful Walk Like You, from the latest album, is the first hint that there are large areas of the crowd who are perhaps only here for the ‘event’ – or only know the hits. There seem to be certain towns and venues that bring out the “Boothy” screamers, and the “C’mon Tim!” bunch. Which is such a shame as it’s a stunning track which builds to a rousing crescendo with the band jamming away on the lead-out.

Two old tracks played back-to-back, What’s the World and Hymn from a Village probably don’t help these apathetic sections, nor does the groove-funk of Wah Wah’s Jam J.

Neither does new song, Bitter Virtue, which sees Jim Glennie, Saul Davis and Andy Diagram huddled around a mic singing the harmonies. Say Something prompts another sing-along. The first release from the new album, Frozen Britain sees the huge backdrop of the album cover – depicting a colourfully illustrated Mexican ‘Day of the Dead’ skull – revealed behind the band. Throughout the evening, it must be said, the sound (at least at the front) was brilliant. Jim’s bass thundering, but perfectly balanced, as is Andy’s trumpet. Perhaps the only level which may have needed dialling down was Larry’s mic, but it might just have been that I was close to his side, not that it affected the enjoyment.

All I’m Saying, another emotional new one, prompts Tim to tell the crowd, “You need to shut the fuck up”, which unfortunately many don’t. It’s a brave decision to play the song, as it always provokes emotions from the singer, and was listed on the setlist as an option only if he felt up for it. The alternative was the band’s biggest and most well known hit, Sit Down. It’s easy to guess which song would have gone down better with the casual ‘fan’, but it’s a wise choice for many who know and have seen the band before. If nothing else, it’s a suitable punishment for those who have no respect during the songs they might not know. Never go to see a band just to hear one song, folks! As the darkness envelopes Castlefield, the band begins their final run-in of songs. Getting Away With It (All Messed Up), Sometimes, and closer Sound are all familiar favourites, and it shows, the audience singing along, particularly during the now-customary outro with the crowd singing the chorus back to the band. “I was on my deathbed yesterday,” Tim tells us, “You made me rise again”.

The whole group are in high spirits, Tim’s voice holding out and showing little sign of any trouble (unlike the performance at the following day’s T in the Park Festival). Guitarist Larry Gott looks particularly happy, in awe of the reception they have received (not that he should be surprised, the band’s fanbase are known to be very enthusiastic), violinist/guitarist Saul Davis even spends time teasing and joking with the front row, and his fellow band mates. 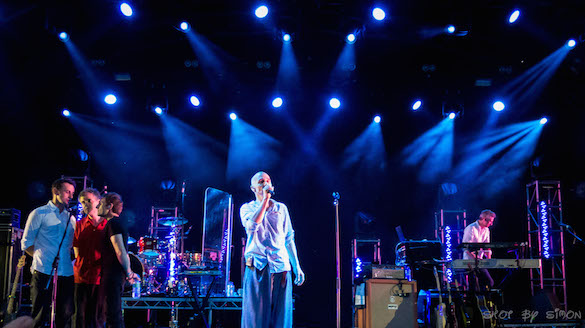 Returning to the stage for the encore, (“this encore thing is fucking bollocks… what a pain in the arse” quips Saul) the band plays the final new song, Curse Curse, which has become more dance fuelled since it was first played last year, with the ever-popular Come Home, Tomorrow, and finally Laid sending everyone bouncing and singing again. With a little time left on the curfew, and the phenomenal reception, the band decides to return to the stage once more for an unplanned run-through of the golden oldie, Johnny Yen.

No doubt not the song many were expecting, but stunning nonetheless.

As the performance goes, the show was brilliant. When you witness a band clearly enjoying what they are doing, it’s infectious. James are going out on an arena tour with Starsailor in November, and that can’t come quick enough. For Manchester fans, this might be the only chance to see them on home soil as there the Castlefield contract dictated that they can’t play the city with the bill again. They received a fantastic show, though, which hopefully will encourage them to head out to venues out of town (Liverpool and Leeds being the nearest). Just learn more songs than Sit Down and you’ll have a great time.

Now if we could only uphold a no talking rule during gigs.

All words by Martin Unsworth. More writing by Martin on Louder Than War can be found at his author’s archive.