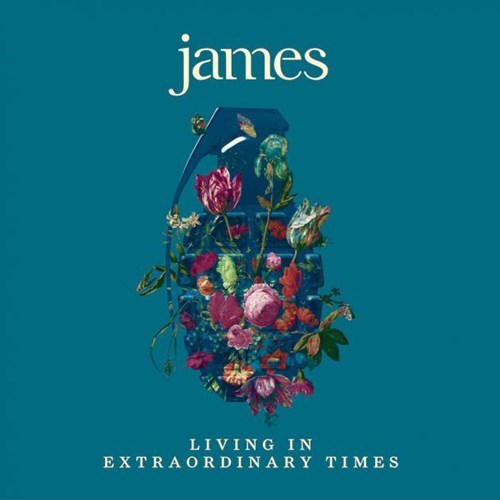 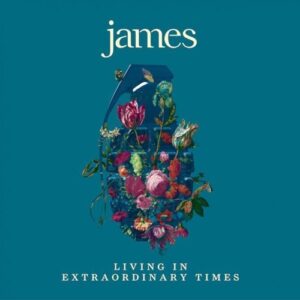 Louder Than War’s Martin Unsworth takes us through the new album from Manchester legends James, Living in Extraordinary Times, track-by-track.

The fifteenth studio album from James comes, as the title suggests, at a time of global turbulence. Never ones to shy away from facing issues head-on, the twelve-track album is often a confrontational rant set to heavily percussive, danceable music.

Opening with a barrage of layered drums, Hank is a tribal and rhythmic tirade of everything that is wrong with modern America. A place that has been home for vocalist and lyricist Tim Booth for several years, so he’s clearly experienced it first-hand. It’s a Trump-baiting three minutes-plus that sets the tone perfectly for what’s to come.

Coming Home (Pt 2) is a spiritual sequel to the band’s massive hit Come Home. Although musically, the two couldn’t be further apart. Starting by mimicking an Internet ringtone, it becomes a passionate love letter to long-distance parenting. Although it’s written from the perspective of a touring musician, it could easily be interpreted by anyone who is forced to work away to keep a roof over their loved ones’ heads. Forever begging forgiveness for missing the important parts of growing up. It’s an emotional song (especially when viewed with the low budget video directed by Leif Tilden) that will strike a chord with many.

Leviathan begins with a rather twee keyboard riff before heading into a techno blizzard that would make it an instant radio hit were it not for the profanity. We can imagine the stirring chorus being used on football clip shows, however.

Dave Baynton-Power’s drums take centre stage with Heads, beating like a heartbeat alongside a blistering synth pattern that increases until the pounding bass joins in. A  damning statement on the current situation in the US, it’s almost as though Booth is looking to be kicked out of the country. Sonically multifaceted, it builds up to a frantic pace of percussion and synth-horns that develops to a trance-like state before a bass-driven breakdown.

Making an important point once more, Many Faces has the potential to become as anthemic as Sometimes and Sit Down. Already played at gigs earlier this year, the audiences have already embraced the song’s mantra to their heart and taken to singing it back to the band. It’s a tune of two halves; the first has a rather jaunty calypso feel while the final few minutes are the aforementioned refrain. Celebrating everyone’s differences but essential similarity (via throwaway Lovecraft references and yet more Trump digs), it’s a simple lyric that makes this the song Nothing But Love (from previous album Girl At The End of the World) should have been.

Following such a rousing number, How Hard the Day is a rather pedestrian and downbeat affair. It’ll likely be the track that gets skipped over then rediscovered in a few years’ time as a classic.

Almost-title track Extraordinary Times brings an almost How Soon Is Now? feel to its intro but rather than having that wavering stereo effect we get an immense Paradise City drum sound. It’s almost like (although most likely not) a cheeky response to certain recent controversial outbursts (or misquotes, whichever you wish to believe). Just another part of the world that has been turned upside down. From Brexit to Trump, racists to #MeTo, things seem crazy right now, but as Booth sings “We can hold it all together”, we have to believe we can. Although the song doesn’t reference those things, there’s some more good advice given: ‘How to ignore this… live in the moment’.

Jim Glennie’s thunderous bass is the star of Picture Of This Place, which builds to a frantic ball of incredible noise that any of new breed of ‘indie’ darlings would be proud of. Hope To Sleep, on the other hand, is a slow, rhythmic piece that never really takes off, but has a groove that is irresistible.

The title track of the recent EP Better Than That has already been burrowing itself into the psyche of James fans and has picked up some much-needed airplay for the band, who are not content to be dismissed as a heritage act. Nor should they, as this track proves. We’ve more than warmed to it over the past few months, and it’s like an old friend by the time it turns up on the album.

Perhaps the most similar in tone to their previous album, Mask showcases a catchy but simple keyboard riff from Mark Hunter ushers in a song that catches fire for the chorus but is remarkably restrained otherwise.

What’s It All About rounds off the proper album in an epic but eerie manner. Screaming guitars and trumpet back the vocals as it slows to a simple refrain. This is going to sound immense live (it’s only been played once so far towards the end of the mini-tour earlier this year) and ends the record on a high.

This is very much a collection that emphasises the band’s rhythm section. Drums and bass hit you between the ears often and hard. Never at the expense of the rest of the group, however. And, as always, the powerful lyrics of Booth make enough of a statement to standalone. Occasionally at odds with the music, they possess a concern for the current climate alongside the usual existential relationship angst.

A Deluxe version of the album includes an extra song, Backwards Glances, which is the most throwaway of the tunes laid down, and three demo versions of tracks that are undoubtedly catchy but unessential.

We could argue that with the anger and frustration that’s being vented (not to mention quite a few expletives throughout the record), it’s as though as they get older, James is channelling the spirit of punk, subverting expectations and forever doing everything on their own terms. The prominence of the percussion elevates this from the both what the band has done in the past and what most other bands are doing now, and Glennie’s bass is certainly getting stronger and infectious, adding even more to the grand sound and the impressive production of Charlie Andrews (Wolf Alice) and Beni Giles.

Living in Extraordinary Times is a challenging album that may divide hard-core fans but will certainly stand the test of time.