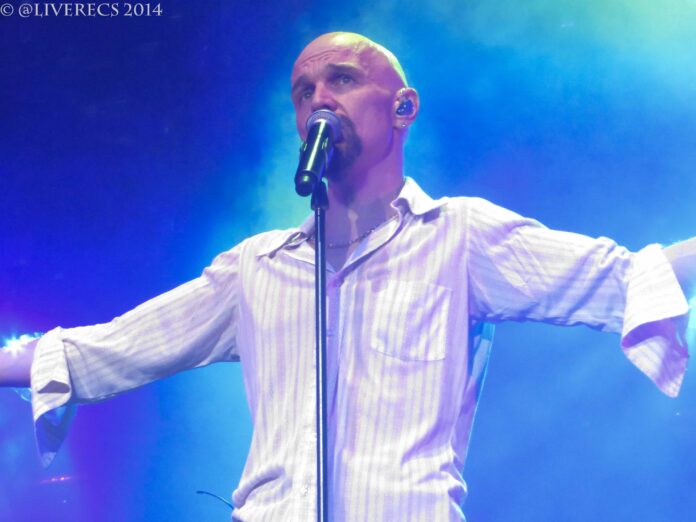 The James La Petite Mort UK tour comes to a close at the still relatively new surroundings of the First Direct Arena in Leeds where Martin Unsworth sees them for Louder Than War.

Leeds is the location of frontman Tim Booth’s favourite football team, and not too far from his place of birth. It’s also one of the two shows (the other being Liverpool the previous week) which were closest for the bands ‘hometown’ crowd to attend, hundreds of them making the short pilgrimage across to Yorkshire as there was no Manchester date on the tour (due to them playing at Castlefield earlier this year).

Being the last show of the UK tour (and probably the last UK date for some months, barring any surprise small shows), the atmosphere is one of celebration, tinged with sadness. Many of the crowd have been to several shows, each seemingly trumping the previous for intensity and energy. The Monday evening performance in Newcastle instantly became the stuff of legend due to the volume of the singing crowd. As has become the norm for the band, the evening kicked off with the ‘VIP’ soundcheck session – essentially a public soundcheck and brief question and answer session. The more cynical may just dismiss this as pure money-grabbing, but in this day and age where bands make next to nothing on recordings, who can blame them? The band are in high spirits themselves for this, Tim telling the assembled that his voice is a little rough so they are going to warm up with a slow one – cue the beautiful and rarely-played Lullaby, from the Laid album. Tim explains that in Newcastle one of the on-stage dancers at the end of the set had a tattoo on his arm which he wanted the band to sign, and when he could see it properly it was the words to the song. The chap in question, Phil Bellamy, told him it meant so much to him and having met the man in question after the show – he was still very much on a high – it’s obvious that this compassion and love from the band meant the world to him. It underlines the power James have over their hard-core fans, arguably more so than any other current band; the lyrics mean something to each and every one of them – it is more than just music, it’s an expression of passion and pain; a release of pent-up emotion and a sense of belonging. This is also unlined by the interaction the band have with the audience – be it at these Q&A sessions, on Twitter, in person or indeed, at concerts. One only has to see the trust Booth has in the crowd when he decides to crowd surf later in the evening – as he had done every night (despite being slightly man-handled in Glasgow). He’s not surrounded by burly security watching out for anyone touching him, nor is he afraid to sing into the face of frightening-looking shaven-headed ‘thugs’. His only stipulation is treat him with respect and ‘don’t stick a fucking camera phone in my face’. It’s not about telling people off for taking photos nor filming, more a personal space issue since it stops him connecting the people he’s heading out into the crowd to see.  The VIP session ends with the band laughing and joking, and it’s a joy to see. 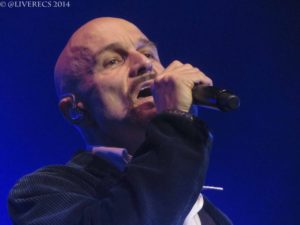 A little time later, and positions are taken on the barrier for the night, and we are treated to the tour support, Starsailor, who have been exceptional every night. Tonight is no exception, with James Walsh looking bemused and not rising to the cries of a woman that she thinks he’s ‘bootiful’ and wants to marry him. For a Sunday night in Leeds, it’s a rowdy bunch for sure! James hit the stage soon after, and launch into a song which had been all but forgotten, discarded as a B-side, and not even included on the compilation ‘B-Sides Ultra’. All Good Boys has become the stuff of legend between fans on this tour; a revelation which proves there’s life in the ‘old songs’ yet. At the Newcastle VIP soundcheck, guitarist Larry Gott admitted that he hadn’t even heard the song until two weeks before the tour began rehearsing. It’s that kind of edgy, almost dangerous, feel that James possess that keeps the live shows so interesting and exciting. The show continues with the intensity increasing with each song. By the third song in, Say Something, Tim is stood on the barrier, and is soon face first in the audience. As mentioned, this trust in the crowd is a unique thing for a ‘star’ of such standing – and it certainly endears this already adoring audience to the charismatic singer. The songs continue with an energy of a group decades their junior, and it’s after a spirited run-through of the massive hit (particularly Stateside) Laid – a track usually reserved for a set-closer with it being such a crowd-pleaser; such is the band’s confidence in their material and the audience’s maturity they can play it so early on – that they play Lullaby to the full hall, with Tim once again telling the story of the tattoo. It’s a song which clearly tugs the singer’s heartstrings. This is a frontman who’s not afraid to show his frailties and emotions. He actively encourages it. This level of vulnerability is a rare sight in the burly rock n’ roll world – but it’s a very welcome one. The next song of the set, the band’s current single All I’m Saying, demands the audience to be more respectful than ever. Something which is hard for the type of clientele an arena attracts; there were several shows on the tour which the song was dropped due to the fact the crowd couldn’t keep quiet and respect the passion and emotion of the song, but tonight isn’t one of them, and it’s played as beautifully as it ever has been. It’s this respect and appreciation which gives the band the confidence to tear through a rare track – previously only played during the soundcheck – from the Whiplash album, namely Go to the Bank. It’s fair to say a large proportion of the audience don’t know it, but this ‘riskiness’ the band exhibit is the quality that endears the faithful to them all the more. The set continues with an incredible reading of Jam J – a funky number from the Brian Eno-produced album Wah Wah, which is given another dimension with the blinding and stunning light show that accompanies it. This, in turn, is contrasted greatly by an equally stunning PS, featuring a spectacular play out from Davis on the violin. Rock music has never felt as passionate as when this band is together. It’s easy to be lost in the music, as it seems so are the band.

This is followed by the song which sums up the group on so many levels, the hit Getting Away with It. Duff notes, missed cues, fluffed lines – it’s all part of what makes James real. It’s only really when Tim asks for dancers to take to the stage for the song Gone Baby Gone (a throwaway album track that works surprisingly well live) that the Leeds crowd really get rowdy. Those who are not chosen make the most of it on the floor, but the lucky few on the stage relish their time in the spotlight, throwing shapes, bouncing and attempting to out-dance Tim. There are ten-mile smiles all round, from the crowd to the all the band members. The energy continues as Come Home brings the main set to a close. It’s not over, though and they soon regroup for a stunning Out to Get You, which is followed by the classic Sound. It’s at this point people realise that both Tim and trumpet player Andy Diagram have disappeared. But when the vocal kicks in, it’s apparent that they have made their way across the building to perform the song to the seating area – which is some way away from the stage. It’s little touches like this that make these enormo-dome arena shows more intimate. You don’t always have to be on the front row sweating away to get up close and personal with this band.

The final song of the night, Sometimes, has become the yardstick for measuring audience response. It’s a brilliant song, which gets everyone going, but once it’s finished it’s the crowd’s turn to show their real appreciation, as they sing the refrain back towards the stage – seemingly going on forever. One only has to look on the faces of the band to see they know how lucky they are to have such a following, but it’s a testament to the quality of the songs that they are still here; still touring; still drawing the crowds – and more importantly, still making incredibly relevant and exciting records. The latest album, La Petite Mort, may not have set the charts on fire but it’s arguably the strongest release of the year, and is likely to be remembered much longer than the ‘raves of the week’ will be. Should you get the chance to catch James live – in whatever setting – take it. You might not get all the ‘hits’. This particular tour has been plagued by complaints from people wanting to hear that song, and accusing the band of being self-indulgent for not including it on the setlist. These people would not be missed if they didn’t show up, or buy a ticket. The people who ‘get it’ will still have a whale of a time, and be carried away with a unique, passionate and incredibly significant band who show no signs of becoming complacent. Just look at the smiles on the faces of the group as they leave the stage – it’s a perfect reflection of the crowd that’s enjoyed every second of their performance, but more importantly, it shows that they are still enjoying it too. Long may it continue…

All words by Martin Unsworth. More from Martin can be found at his Louder Than War Author’s Archive.