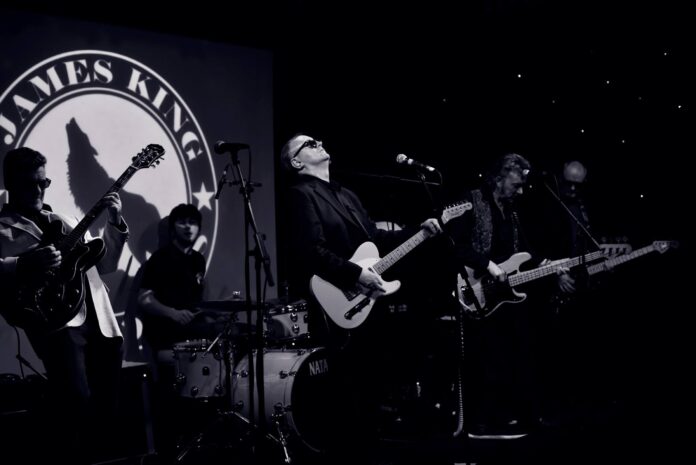 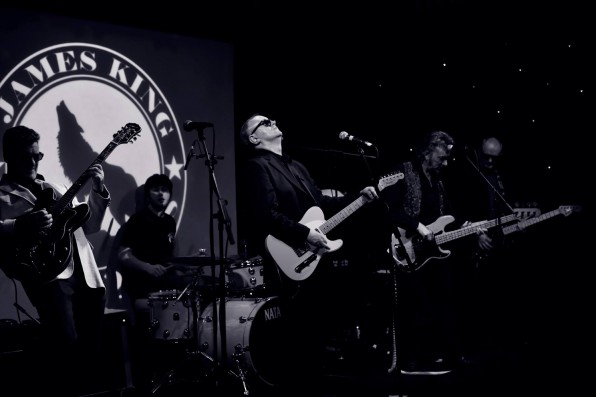 Celebrating the release of their debut album, ‘Lost Songs of the Confederacy’, James King & The Lonewolves take to the stage at Glasgow’s Oran Mor. Louder Than War’s Gus Ironside reviews.

Louder Than War’s Gus Ironside joined the fun patrol with James King & the Lonewolves, as the notorious Glasgow band celebrated the launch of their album ‘Lost Songs of the Confederacy’ with the help of two stellar support acts:

Oran Mor played host to the second of two album launch gigs for James King and the Lonewolves’ debut album, ‘Lost Songs of the Confederacy’,  which was finally released this year three decades after the original attempt to record it with a crazed John Cale at the controls.

Due to the venue’s ludicrous 10pm curfew, opening act Roy Moller was due on not long after the doors opened at 7pm; a tough slot as very few people had arrived by then. Shortly before the Dunbar-based Outsider singer-songwriter took to the stage, Link Wray’s Rumble had been played, its menacing, ominous atmosphere setting the scene for a night of galvanising rock ‘n ‘roll. 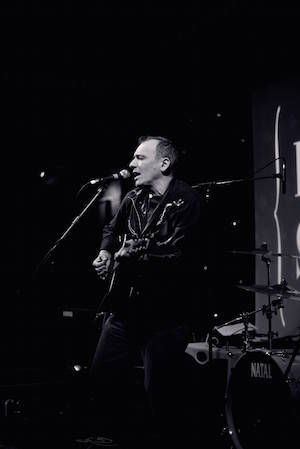 Moller’s set was short but captivating, featuring a selection of songs from his substantial back catalogue, spiced with Moller’s trademark witty ad libs; ‘Great Wall of China’ was wryly introduced as “my biggest hit”, while ‘Captivity’, from Moller’s Edinburgh Fringe show about Lou Reed, incorporated a reference to the similarly named singer of the next act of the night, Lola In Slacks.

Next up was the best new band in Scotland, Lola In Slacks. The veteran Glasgow-based journalist and broadcaster Billy Sloan has already picked up on the massive potential of the group; the three demo songs the band have made available via Soundcloud are astonishing. Fronted by spellbinding femme fatale, Lou Reid (permanently sporting shades, just like her infamous namesake), the six-piece of crack musicians delivered an absorbing, utterly compelling set, book-ended by ‘Bisous du Mistral’ and ‘False Lines’, both tracks being featured on their three song demo. ‘Trocchi’s Canal’ was another highlight, but there were no weak songs in a set that brought to mind Tim Buckley, the Velvet Underground, John Cale and even a hint of T-Rex.

Reid’s compelling Eartha Kitt-meets-Marianne Faithfull voice was just as impressive live as it is on the demo songs, and Lesley McLaren’s skilful, perfectly-judged drumming was reminiscent of Jay Dee Daugherty’s responsive playing with the Patti Smith Group. Co-songwriter Brian McFie’s guitar playing was creative and inspired throughout, but there are no passengers in this ensemble, with Villy Karagouni, Davy Irvin and Martin Stuart Taggart all impressing on keyboards, bass and guitar respectively. The audience had filled out by this stage and Lola In Slacks were very warmly received; there was a real sense that this is a band with its own, unique identity, who, like Roy Moller, deserve to be heard by a much wider audience. 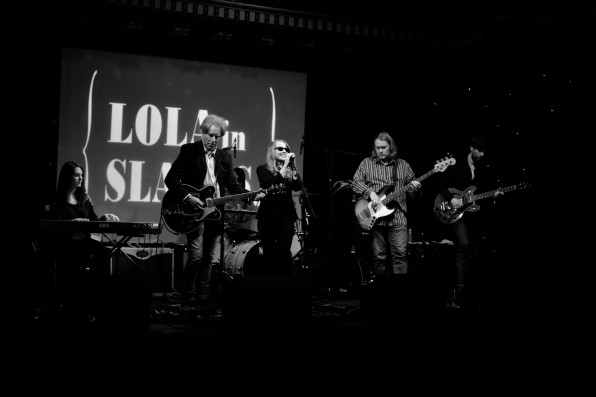 Photo above: Lola In Slacks live by Gavin Fraser

The headlining act took to the stage swiftly after Lola In Slacks, and it immediately became apparent that James King and the Lonewolves are a different beast live than on record. Opening with ‘Fly Away’, King’s scything Telecaster led their attack, with Jake Mckechan and Joe Sullivan providing sparkling counterpoint guitars, the intelligent use of different chord voicings retaining the clarity of each instrument. Following the Byrds-like opener, the Lonewolves really kicked in with the swaggering ‘While I Can’, youthful drummer Corey Little bringing bags of energy and Nick Clark’s swooping bass driving the rock ‘n’ roll heart of the band.

This band carries a lot of baggage, in terms of the endless apocryphal tales of booze, violence and generally self-destructive behaviour linked to their past, and James King himself has a reputation as a curmudgeon to rival Mark E Smith. None of this was evident as the Lonewolves barnstormed their way through an exhilarating set, exuding confidence and positivity. During an explosive ‘(Un)Happy Home’, King dropped in the opening lines from Iggy Pop’s ‘Kill City’, clearly revelling in the assured form of the 2014 Lonewolves. ‘Pretty Blue Eyes’ and ‘Texas Lullaby’ benefited greatly from the full live sound, which seemed to enhance the Television/Tom Verlaine aspects of the band. The sublime ‘Bridgeton Summer’ was another highlight, the emotional heft of the song surely hitting home for many members of the audience. 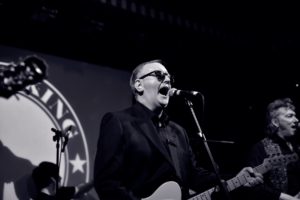 (Photo right, James King live by Gavin Fraser.) As the 10pm curfew drew close, the band burned through a closing triptych of ‘Chance I Can’t Deny’, ‘Fun Patrol’ and an emotional finale of ‘A Step Away From Home’, the deeply personal meditation on loss, mortality and the possibility of redemption which also closes ‘Lost Songs of the Confederacy’. There was no way of following that, the Lonewolves knew it and we knew it, and besides, time was up.

The Outsider poet, the Francophile bohemians and the self-proclaimed lone wolves had all played their hearts out, leaving the audience feeling that this is only the beginning, there is much more to come. Roll on 2015.

All words by Gus Ironside, whose Louder Than War archive is here. Live photos by Gavin Fraser.