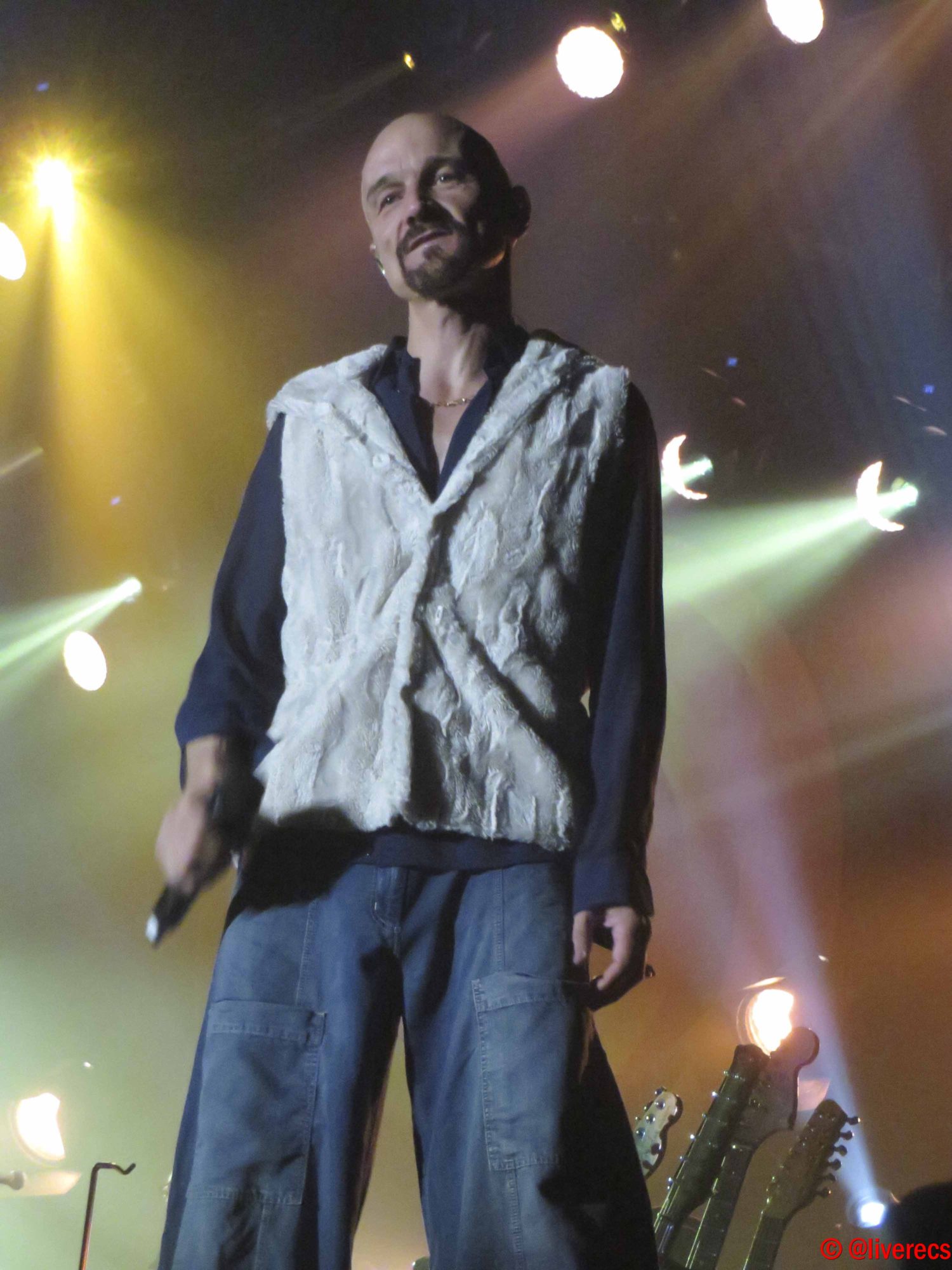 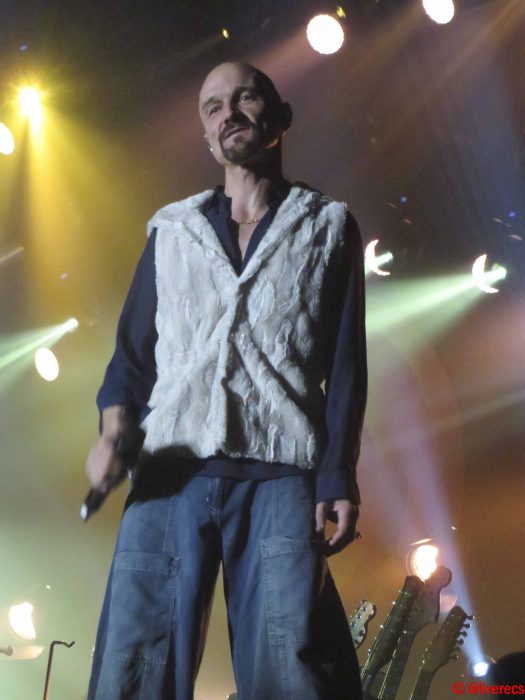 With their latest album Girl at the End of the World reaching number two in the charts on the week of its release and mid-way through one of their biggest UK tours in years, James plough on doing what they do best – playing in front of thousands of eager music fans. Louder Than War’s Martin Unsworth checked them out at their Manchester Arena show.

Hometown shows are usually something of a celebration for both band and audience, and by the time the James tour makes its way to the cavernous Arena in Manchester, the party atmosphere is building to fever pitch. Even throughout the day, scores of fans have met up, partaken in several refreshments, and made new friends. The town’s resident free artist, Mancsy even got in on the act by distributing some art prints that combined his trademark bee with the band’s daisy emblem.

But before the main band can get their show started, there is another triumphant local band gracing the stage. The Slow Readers Club was chosen to support the group on many of the dates, with Jack Savoretti looking after the duties in the bigger arena shows. However, they had gone down so well at the earlier gigs that they were given a short opening slot on a few of the other dates – including the massive one in Manchester.
Having already built up quite a reputation in the town, the band takes to the stage terribly early, just forty-five minutes after the doors have opened. For the four local lads, the sight of walking out to a largely-empty cavern of a room must have been both daunting and exhilarating. It is, after all, the biggest show they’ve played on home turf to date and they are not going to let those who can’t be bothered getting there early get in the way of showing people what they are made of.

With a slightly truncated set, it’s almost as if they have even more to prove. Which they do, with some ease. As the arena slowly begins to fill, the reaction grows. By the end of their thirty minutes, there are more than a few new converts to the band; something that will serve them well for their headlining appearance at the Ritz over on the other side of town in November.

With the new local hopefuls finished, it’s down to Jack Savoretti to light the fuse under the swelling crowd. It’s an odd choice of support act, really; particularly following the young blood that proceeded. Unfortunately, it’s not a hundred percent successful, either. Savoretti and his band are clearly a talented bunch, and some tunes certainly get the toes tapping, but the mix of John Mellencamp vocals and bluesy pop-rock falls a little short with the avid James fans gathered down the front. Conversely, Savoretti’s set in Leeds the following night went down a storm, to quite a full arena, so there’s clearly a draw, but one can’t help thinking the Manchester show might have been better served by having the supports switch places. It’s understandable why they weren’t – The Slow Readers Club is still unsigned – but one gets the impression that if there were just the original one support tonight, it might not have gone down as well.

By the time the lights dip for the main act, the arena is packed and the atmosphere electric with anticipation. Knowing how lairy the crowd can get at the massive Manchester shows, James filter on stage, say hello and ease into a stirring Out to Get You. It’s a perfect opener for these situations, as it’s familiar but calming. It’s a beautiful blend of instruments – including keyboard player Mark Hunter on melodica and Saul Davis’ stirring violin. It’s also the same approach (and song) they used when they headline the Summer in the City show in 2014 at Castlefield. It instantly diffuses any pent-up ‘bounciness’ but satiates those looking for some ‘classics’.

As mentioned, the latest album has been very successful, and it’s only right that the band should be proud and confident enough to make the songs the lynchpin for the current live show. And it’s that assuredness in the material that means the next four songs are taken from the release. However, in time-honoured James style, frontman Tim Booth misses his cue in Move Down South and promptly makes the band restart the intro. Where almost every other group would be written off as a shambles, mistakes like these are embraced at a James show; by both the band and the audience. Following the song, bassist Jim Glennie jokes, “We’re obviously not telling you to move down south, that’s the last thing you should do”. To My Surprise sees the first journey into the crowd for Booth, something he would have been quite right to be wary of considering the fact he was scratched by an over-enthusiastic fan in Llandudno the night before. He’d already told the fifteen thousand-strong crowd about the incident and asked that if he did venture out to connect, for them to look after him as they would a priceless Ming vase. After he’s flopped into the crowd to surf the hands of the fans, “if you fall off a horse, you should get back on it as soon as possible”.

The brace of new songs – which all go down incredibly well with the crowd – lead into some genuine crowd-pleasers. Come Home has the whole arena bouncing, singing and dancing; it’s an anthem for the town as well as the band and is followed in quick succession by Ring the Bells and the ultimate singalong track, Sometimes. Over the past few years, this is a track that could provoke audiences of any size to sing the refrain back to the band for minutes afterwards. This time, however, any such communal vocals are curtailed by David Baynton-Power’s opening drum pattern of the sublime P.S. – a track so beautiful that there were more than a few damp eyes in the crowd. Especially with Davis’ haunting violin and Andy Diagram’s mournful trumpet closing the song. Tim acknowledges the small-but-powerful multi-instrumentalist by recounting how after Saul’s first show with the band, some fans complained, “James don’t have fucking violinists”. With the vocalist adding jokingly, “We still don’t”.

Another pair of new tracks bombards the senses, as the album title track, The Girl at the End of the World and the groove-filled Bitch gets the crowd dancing again.

“From the sublime to the ridiculous… some old English folk songs” quips Saul as the band strip down the sound for a pair of acoustic tracks, accompanied by guitarist Adrian Oxaal on cello. This certainly isn’t your average ‘indie’ band. She’s a Star and Just Like Fred Astaire are reworked into beautiful camp fire renditions; both retaining their singalong hooks and ability to stir the feet into moving.

The band’s next single, Dear John leads into one of the surprise tracks added to the setlist roster on this tour: Honest Joe. Taken from the experimental album Wah Wah, it’s something that may have been lost on a large proportion of the audience, but the thumping drums, trippy guitar and use of vocal distortions (the good old megaphone, which will be used in the next song, Sound, too) brings the groove to a crescendo.

During Sound, Andy Diagram appears half way down one of the lower tier with a neon trumpet. With the majority of the audience transfixed by what’s happening on stage, it takes Tim, standing on the edge of the stage, pointing out to the seated area for people to turn and see the spotlight aimed at Andy. “Can we have our trumpet player back?” Tim begs before the band launch into the set closer, Attention. A stunningly gorgeous track from the latest album that has epic stamped all over it, much in the same way Led Zeppelin would build on musical patterns that change and grow throughout the song, Attention takes the listener on a journey. Most bands wouldn’t end a set on such a song. But most bands are not James.

Naturally, there’s the encore. The most famous song would be the natural one to drop in now, and being the hometown enormadome crowd, it’s probably safer to play it than not. Contrary as always, Sit Down is performed as a stripped down rendition with Andy appearing at the very back of the arena, before being joined at opposite sides by Tim and Adrian on acoustic guitar. Strolling through the audience singing, it brings this all-too-familiar tune back to the people – quite literally. As the trio reach the stage, the rest of the band kick in and it becomes the singalong anthem that people are used to.

Moving On, from 2014’s Le Petite Mort proves once more that songs about dying can be fun, anthemic, and sung en masse. Nothing But Love, which to be honest, still hasn’t won over this fan’s ears but does keep the momentum and climaxes with a confetti drop that is the only concession the band has made to arena theatrics.

It’s not over yet, though, as a stage manager gestures to Saul that the curfew is closing in and they have just enough time for two more. “Just pretend we’ve gone off, you’ve clapped, and we’ve come back on again”. So we’re treated to early track, What For, from the Strip-mine album and not played for many years until this tour a song. A truly phenomenal evening is brought to a close by Tomorrow, with fifteen-thousand voices joining the group in unison and making the cold and heartless arena a warm and intimate place rather than the corporate vacuum it usually is.

There were some niggles from a personal perspective: new tracks Alvin, Waking, and Feet of Clay were missing from the setlist, but with having to make some concessions to a Friday night arena crowd, one would guess that something would have to give. However, with a few dates left on the tour they may well make it back into rotation of songs. One thing James is good at is varying the setlist; no two nights are exactly the same.

So with the usual fears of the Arena crowd being disengaged from anything other than the big hits, the 2016 Manchester show proved a massive success for the band and fans alike. Here’s hoping it isn’t too long before the band Come Home once more.