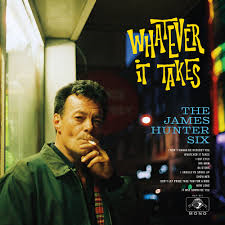 New album by Colchester-born R&B/Soul singer and guitarist James Hunter and his band, the follow-up to 2016’s Hold On…..LTW’s Ian Canty takes a trip into the total unknown…..

I have to hold my hands up and admit I knew next to nothing about James Hunter before listening to this album. Apparently he has been recording since the mid-80s, when he first burst out of the Pub and Club scene in London under the guise of Howlin’ Wilf And The Veejays. After that in 1996 he began recording under his own name and he then received some patronage from none other than Van Morrison, who appeared his first solo album Believe What I Say.

This new LP is his third album under the moniker of the James Hunter Six, the second one on the New York-based Daptone label. The other members of the Six are a rhythm section of drummer Jonathan Lee and Jason Wilson on bass with the twin saxophone attack of Damian Hand (tenor) and Lee Badau (baritone) plus keyboardist Andrew Kingslow to complete the line up. Each of his bandmates have been in for the long run, with the newest joining Hunter 20 years back. The Six have played a lot of shows supporting the likes of incomparable Etta James and Aretha Franklin and tours under their own steam, making a name for themselves playing their own version of early 60s R&B and Soul.

So definitely someone who has come up the hard way through the club circuit, all the time working on his muse in the Blues. But until I actually put the disc in the CD player, I have to admit I had never knowingly heard anything by him (or them). I had to play the disc quite a few times to really get a handle on it. The sound of The James Hunter Six on this album takes us right back to Ground Zero of Soul Music in the very early 1960s, just as it was emerging from the US R&B chitlin circuit. The kind of thing you would find on the Soul Breakout 58/59/60/61 compilations. Sam Cooke and the Drifters, the type of Soul that came from Doo Wop/R&B, Gospel, Rock N’ Roll and even Latin American influences, before Tamla Motown and Beat became the big news and when things were just being worked out. Even the cover art looks like something from a 50s Jazz album.

It is a lovely point in time really, one that is seldom referenced these days, but the James Hunter Six pitch their efforts in that direction. Whatever It Takes is definitely an album that you have to be in the mood for, but it has been put together with an authentic touch, there is a clear love and feel for the music. The James Hunter Six stick to their guns and for that they have my respect.

The album starts with the Slow Samba (well it sounded like Ska to me but my daughter, who knows about such things, told me that) of the single I Don’t Wanna Be Without You and progresses through the very-Sam Cooke title track and the faster I Got Eyes, which shows Hunter’s prowess on the guitar. Blisters is more of a showcase for the saxophonists, they put on an impressive display here and the playing of all is impeccable throughout. The deep Soul song of regret I Should’ve Spoke Up is a highlight and the sweet backing vocals of How Long makes me think of when the Jordanaires backed Elvis. The lazy groove love tune It Was Gonna Be You brings things to an end on a sweet note.

There’s no doubt in my mind that this is a heartfelt, fresh and quality recording of, if you like, Proto-Soul. What the Pop fans of today will make of it I don’t know? Is it too backwards looking to make a mark in the cynical world of 2018? I would like to think that there still remains an appreciation for a good tune, so why not? What I do know is it would make a good soundtrack for the more carefree days of summer rather than dark and dank February, but even now Whatever It Takes sparkles a bit.