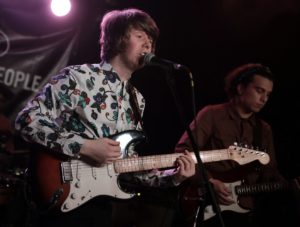 To celebrate the release of his excellent new single Come Out To Play, James Holt packed out Night People in Manchester on Friday night with a full-band set supported by Mano McLaughlin and Toria Wooff. We went along to catch up with an artist who is starting to make waves in Manchester with his articulate brand of songwriting and unique and endearing stage presence. 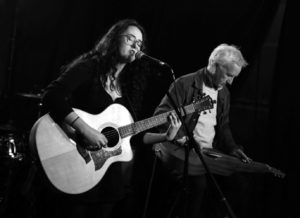 Toria Wooff opens up proceedings with a six-song set that showcases her meticulously constructed songs which sound like they come from further afield than Bolton and take the listener on a journey. Rich harmonies and melodies abound in tracks like the title track of her debut EP Drako and two new ones For Liam and Collison Course from her forthcoming Badlands EP. Songs are given the space and room to breathe and allow us to appreciate her stunning voice and the subtle nuances in the way she sings.

Next up is Mano McLaughlin who is preparing the release of his very long-awaited second album Then Lightning from which most of his set is taken. He takes the time to talk us through the songs, his father’s account of the 1972 Bogside massacre, 13 Pieces Of Quiet, a much more eloquent and personal take on events than more famous songs written about it whilst the final song Bus Stop Strangers, one of our favourite songs of all time recorded by his previous band Meadow, is a conversation between boy and man Mano and how they wouldn’t recognise each other. Big Truck takes aim at the Tories and once again feels personal rather than big statement. 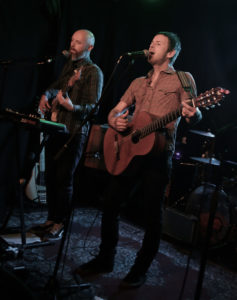 It’s exactly that which makes Mano so revered amongst the Mancunian lyricists and friends who have broken through and received national and international acclaim. His unassuming nature means he looks happy just having a guitar in a hand and a mic in front of him. With clarinet, an underused instrument in our book, added into the mix, his band create a wonderfully intimate palette for him to work with. Hopefully the release of Then Lightning will go some way to getting him some of the recognition he so richly deserves.

It’s James Holt’s night though. Sated on the free Carr’s pasties he’s had delivered for us, there’s a real sense of anticipation in the room. With people who’ve joined James’ journey at various points in the past few years as he’s grown into the confident artist he is today. There’s something immediately likeable about him, his ability to hold an audience’s attention with slightly rambling yet profusely intelligent and genuinely witty introductions to songs, his terrible taste in colourful shirts that some of the audience have deliberately copied and the beaming smile that never leaves his face. 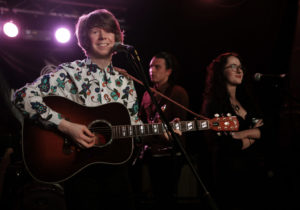 Most of the crowd will have known James from solo acoustic performances but tonight he has a full band with him to expand on the steady stream of singles he’s released over the past few years. What the increase in personnel does is allow him to stretch his wings and show just how versatile and adaptable his songs are. It’s our contention that most great songs can be reinterpreted, stripped down, amped up and still retain the qualities that make them great and James has these songs in spades. He’s accompanied by Toria for half the set and that combination of voices simply further underlines our point.

We’re here to celebrate the launch of new single Come Out To Play, as heard on Granada Reports as James takes great pleasure in telling us, and along with previous singles Sanguine On The Rocks, Alone Again and the Brian Eno approved set closer What Happened To John and Sanguine EP tracks Tears Aren’t Enough and Contemplations, it reminds us of the already impressive body of work he has to his name. Tonight the likes of Magic Disaster and A Night On The Blue Mountain, an unfathomably clever criticism of Donald Trump delivered with a mischievous humour, show that he unsurprisingly has a whole bank of songs destined to have the same impact.

The night is an unquestionable triumph. Letting go of songs he records all the parts for (except drums) could have been a torturous experience, but James’ modest ego doesn’t make this an issue and it allows him to paint these songs in a different light to most of us are used to. The crowd have fallen in love with him by the end, the roars of appreciation at the end tell their own story of a unique talent who’s on the verge of breaking down the walls that an often image above music obsessed industry put up to try and suppress.