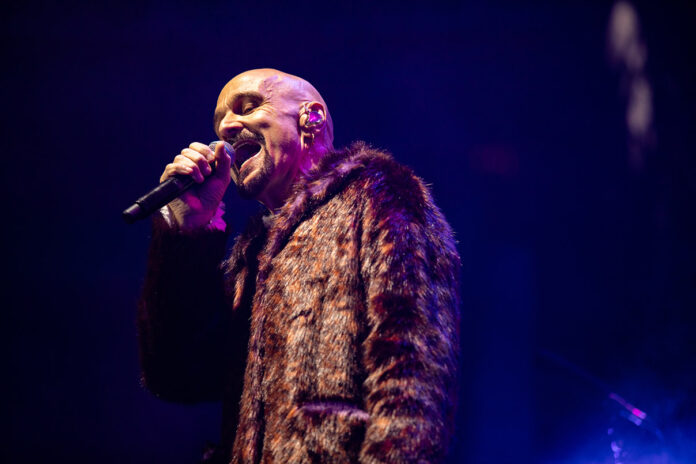 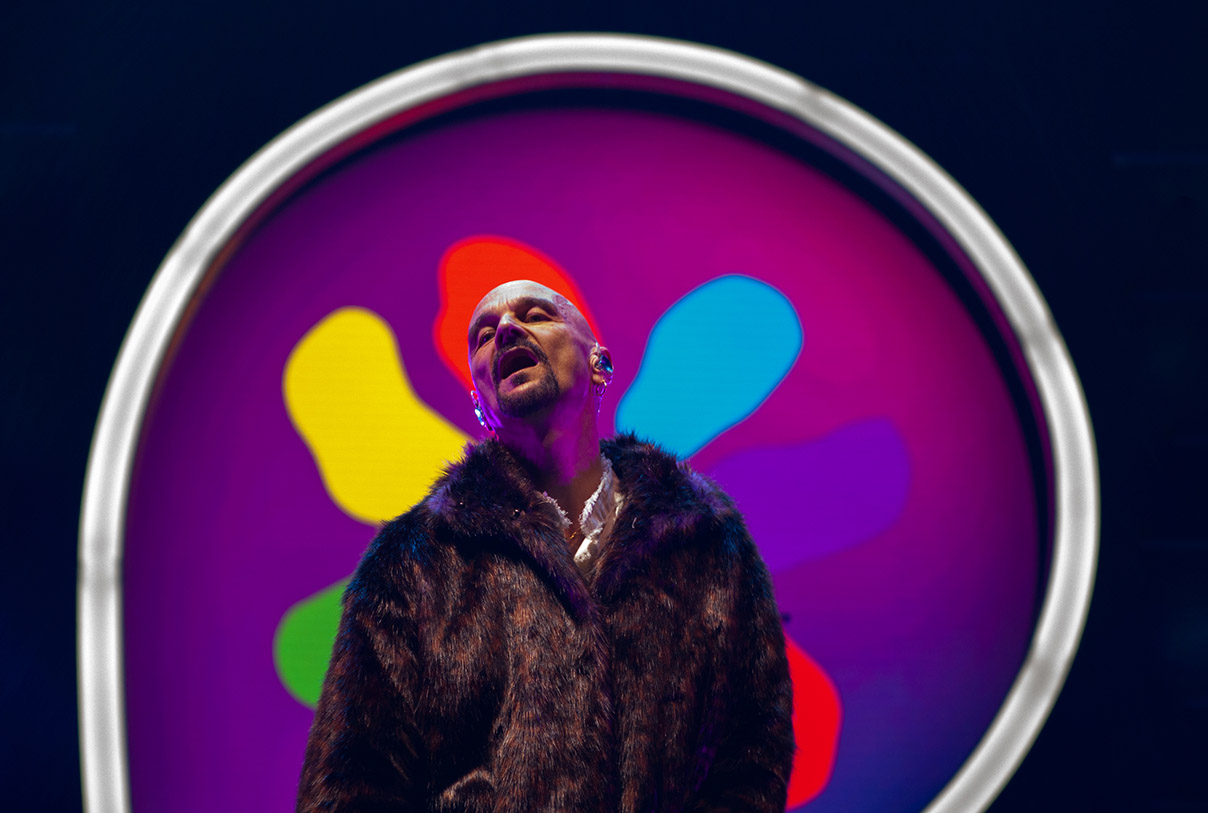 It doesn’t feel like almost 31 years (give or take 5 days) since James were playing to a packed-out GMEX full of baggily-dressed teens and twenty-somethings with curtain haircuts. It is though, and those once teens and twenty-somethings are out in force, some with their kids, to enjoy the music and craft of two of Manchester’s iconic frontmen, Shaun William Ryder and Tim Booth.

It’s beginning to feel a lot like Christmas as I head into Manchester tonight. Two of the city’s favourite bands return to a packed Arena (the Nynex/the MEN or the AO, feel free to pick your favourite incarnation or sponsor), the markets are in full swing, the trams are full and, from the state of some people, the office parties have started a little earlier than usual. I’ll be honest, the Arena has never been my favourite venue, it can be quite soulless, but I’m confident that the bands tonight will make this a hometown show to remember.

Getting into the Arena slightly later than planned (lots of queues, security checks etc) the Mondays are on stage. Once they would have signified the end of a messy night, but tonight they are the perfect party starters, whipping up a packed partisan crowd. I sadly only catch the last half of their set. I’m not sure what I missed but I caught a tightly-delivered 24 Hour Party People, Hallelujah, Step On and a gloriously ramshackle Wrote For Luck. Everyone was firing on all cylinders, clearly enjoying being back on home soil. A special mention for Rowetta though, who looks as stunning as ever, commanding the stage, and poignantly dedicating Step On to 808 State’s Andy Barker. 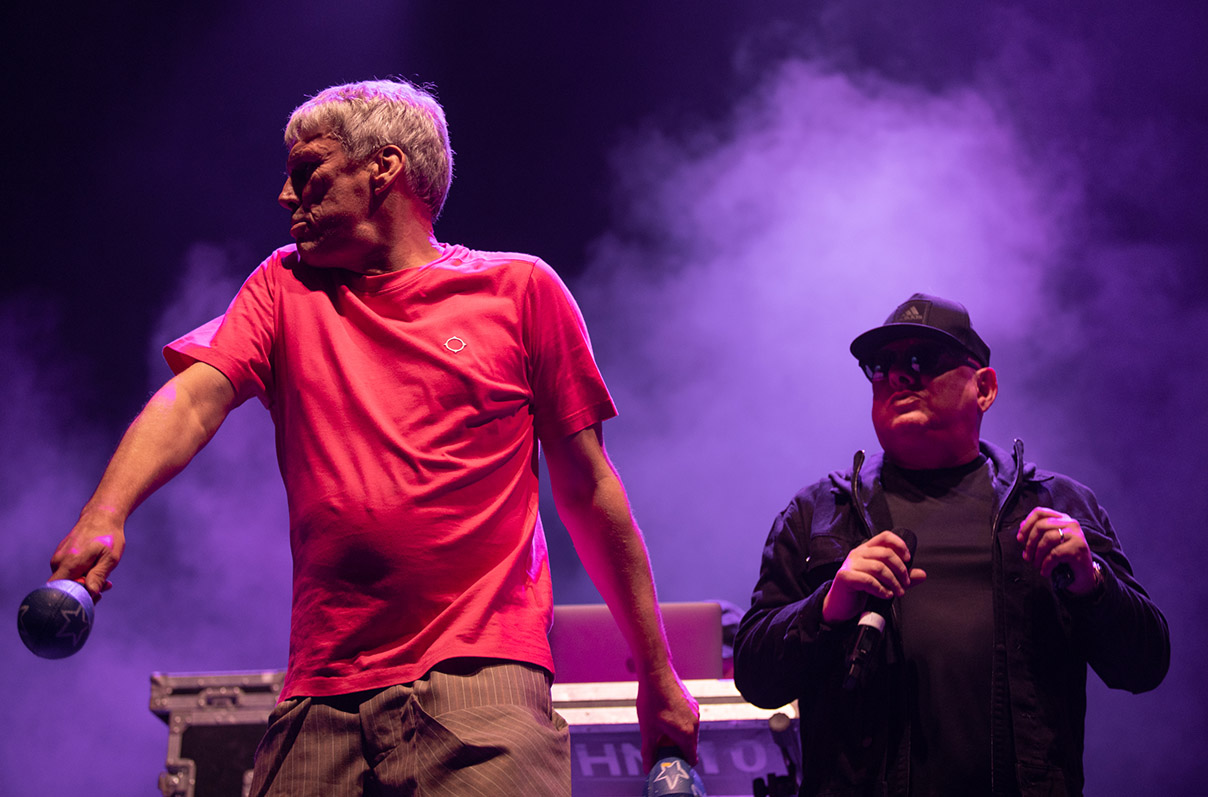 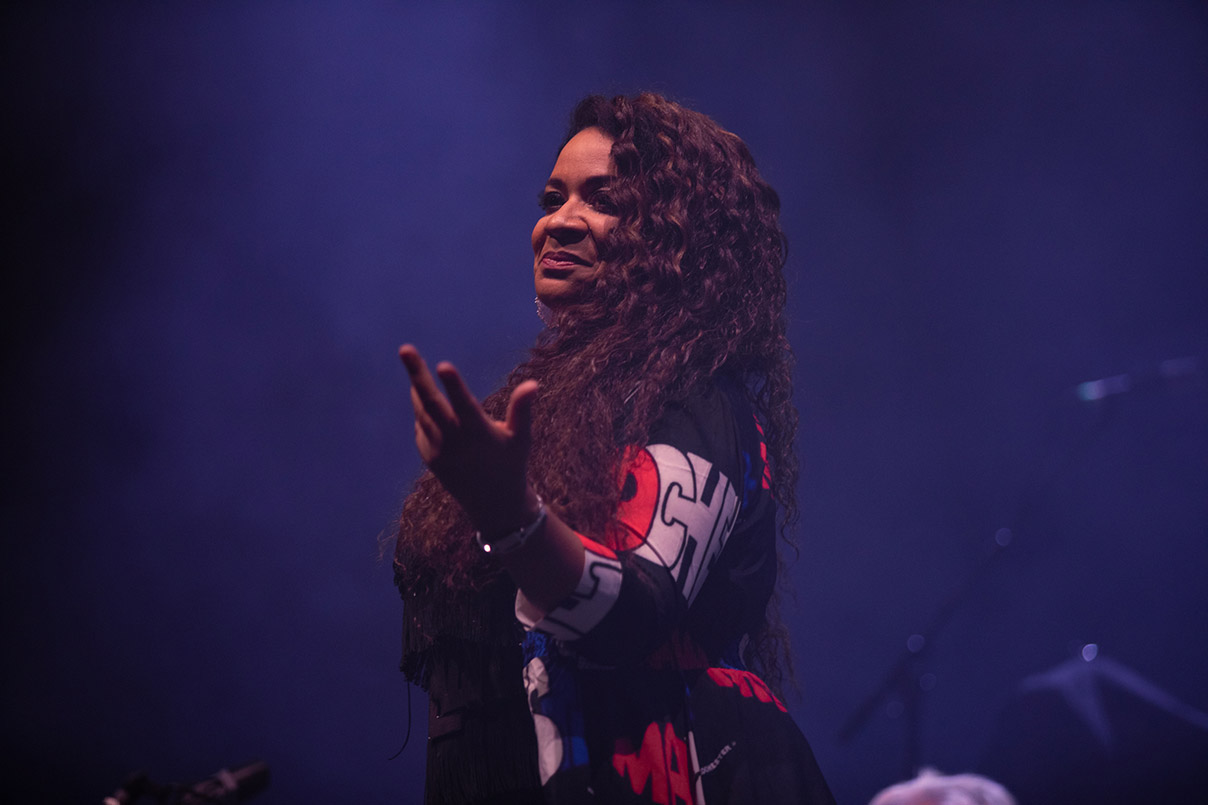 James arrive promptly at 9pm, and kick things with the haunting, atmospheric ZERO, the opening track from the latest album, All The Colours Of You before heading into Isabella. The current nine-piece line up, featuring the added talents of Chloe Alper and Debbie Knox-Hewson, is a sight to behold; it’s visually stunning and the sonic equivalent of widescreen. There is a party going on all over the stage with the multi-talented ladies swapping drums for guitar and guitar for keyboard throughout, as well as clearly enjoying themselves. While Tim is an obvious focal point it’s hard to pick one place to look as there is so much going on, with Andy Diagram looking like he’s having the time of his life as well. There is so much energy on stage it’s impossible for it not to feed into the crowd.

Anyone hoping for a ‘greatest hits’ tonight would be disappointed. What we get is a selection of tracks from the band’s almost 40 years, not the songs we necessarily want, but the ones we need. She’s A Star is third on the list and signals the first singalong of the evening – as soon as the unmistakable keyboard intro lands, you can hear the audiences vocal accompaniment reverberating around the arena. Like many others, despite my best efforts I soon realise I still can’t hit the high notes. Thankfully I’m drowned out by the 20,000 others in attendance. It feels like a celebratory moment, worthy of an encore for a lesser band. The bar has been set. There is a real feeling that we all belong as Tim reminds ‘us not to hide our light under a bushel, as we all do’. Born Of Frustration quickly follows, with an extended introduction which has the crowd whipped up like they’re waiting for their team to take the field. 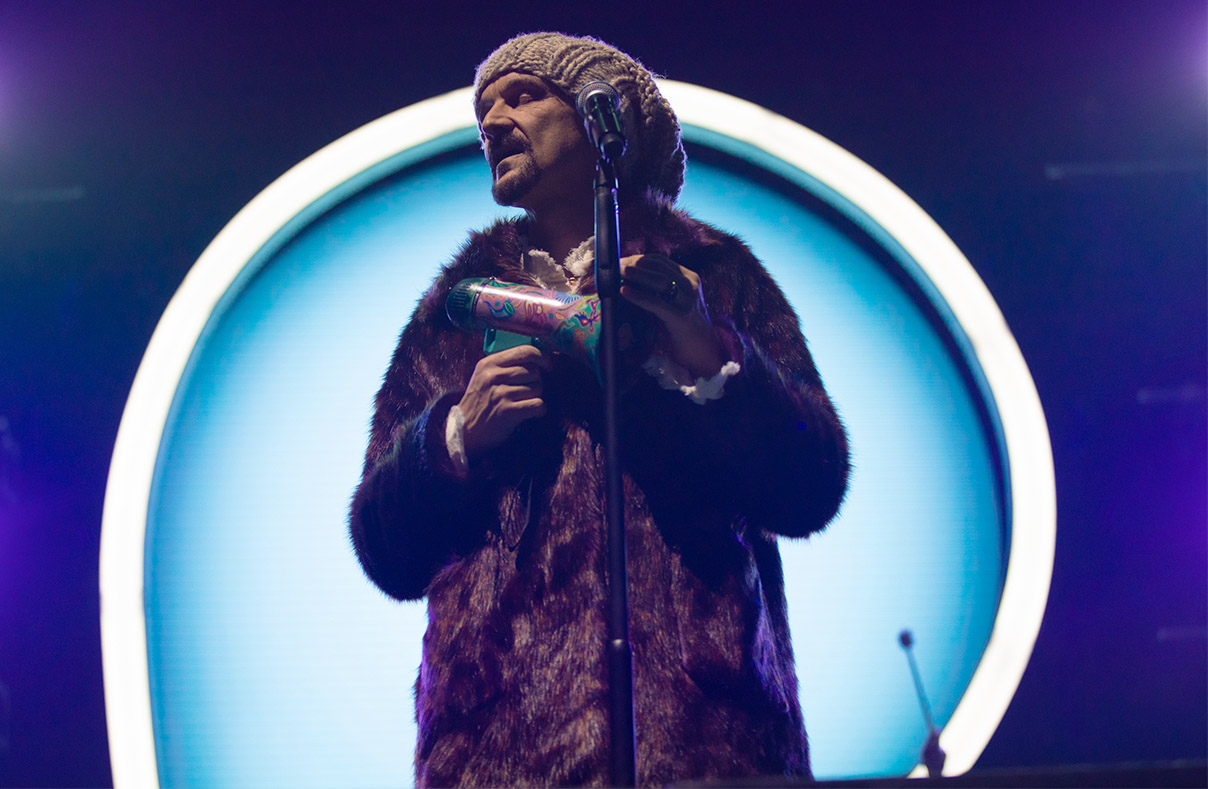 A rarely performed (recently at least) Goldmother begins and is quickly brought to a halt by the enigmatic frontman; he’s in the wrong key. He apologies jokingly, stating they try to be at least a semi-professional band before beginning again. Shortly after Tim regales us with tales of the time they took the Happy Mondays on tour – car crashes and stolen riders aside he confesses that they loved them. He invites Bez back on stage to join in on the track the Mondays influenced, just as he realises he’s skipped a song on the set list. That’s irrelevant though as the crowd erupt as Come Home begins. It’s a dance-off between Booth and Bez that ends in a draw on this occasion. Alper and Knox-Hewson really add something special, elevating the sound with the former’s vocals enriching what is already in place and the latter drumming and dancing around the stage at every opportunity. Come Home is followed by Honest Joe (from the experimental Wah Wah) and features Booth at his shamanic best, the ladies joining him in an almost mystical tribal dance.

It’s not long before we’ll have another taste of the slightly ‘unknown’ with Maria’s Party, a bit of a curio, performed live but never recorded, before Hymn From A Village. For this the band is stripped down to the core members and a welcome reminder that James’ career didn’t start with Sit Down. The communal singalong of Nothing But Love connecting the crowd is sandwiched between La Petite Mort’s opening tracks, Walk Like You and Curse Curse, before things get back up to date with a powerful Wherever It Takes Us. The next track is introduced as the one that Tim’s father-in-law requested he sing shortly before he passed from COVID. Even before the first line is sung a capella, the crowd has joined in. It is of course Sit Down; finally reclaimed from drunken student discos, James’ most famous song now has an added depth and meaning from its protest origins. An extended Sound closes the main set. As the band take a bow I check my watch – we’re quickly heading towards 11pm. The band reappear for the encore, they aren’t stopping. 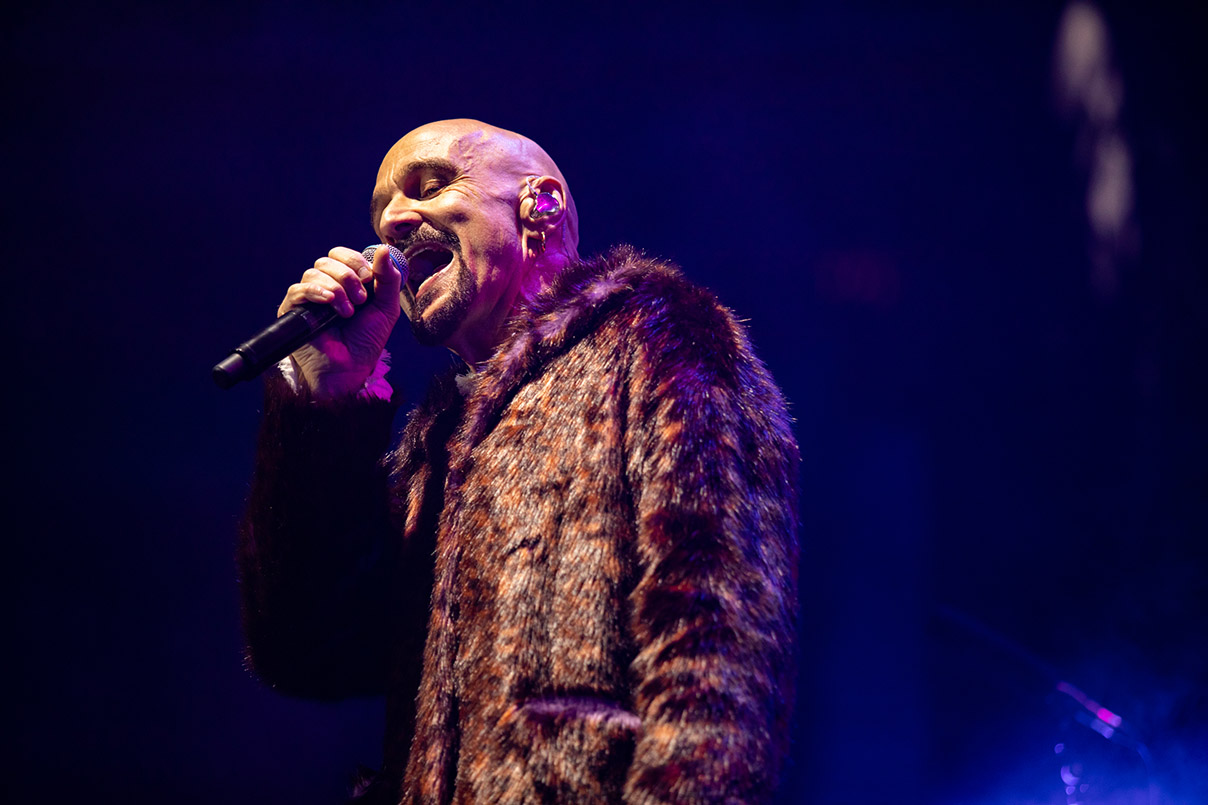 Beautiful Beaches (a song with a celebratory feel about having to leave your home due to forest fires) starts things off again. Tim says they’re carrying on despite the £25,000 fine for breaking curfew, before waggishly heading into a joyous Getting Away With it. Everyone is on their feet now, even the bloke dressed like he’s just come from a business meeting sat in front of me. He’s not moved all night, offering only polite applause. Clearly this is his moment; as the band launch into Laid, he’s up filming it on his phone and singing along. Good things come to those who wait eh? It’s another opportunity for the choir in the audience to sing at the top of their lungs too while the band whirl around the stage, clearly enjoying themselves.

As the clock hits 11pm Booth ushers in Sometimes, adding ‘this better be worth it’ as they break curfew. It is worth it, and then some. The song finishes, the band take another bow, Knox-Hewson (now on guitar) starts strumming and before you know it we’re back into it… the band finally, I imagine reluctantly, leave the stage around 11:15pm.

Tonight was triumphant. James are re-energised and at the top of their game. For a long time, they were the under-dogs and pretenders to the throne; after tonight’s show, they are THE band, Mancunian or otherwise, by which others should be measured.

My gig of the year, no question.