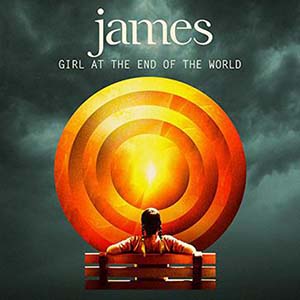 James: Girl at the End of the World

Two years ago, Manchester legends James released their biggest and best album in quite a while, La Petite Mort. Louder Than War’s Martin Unsworth finds out if the follow-up is orgasmic or an anti-climax.

There are plenty of bands doing the rounds at the moment that began their career several decades ago. The nostalgia trip is a profitable one for some. There are fewer of those bands who are still making new music, and even less that are making music that is fresh and enjoyable. It’s easy to trade on past glories and regurgitate a sound that can be sold easily. James has always been the outsiders when it comes to that commercial aspect. Despite the hit singles and ferociously supportive fan base, they never quite get the respect they deserve.

To prove their worth far above a legacy band, James is about to release their fourteen studio album. While 2014’s La Petite Mort featured a smorgasbord of styles and a common theme through many of the songs, Girl at the End of the World steps up a gear and unleashes a powerhouse of keyboards and dance-fuelled beats that will take many by surprise.

That’s not to say the key elements that make a quintessential James song are not present. Vocalist Tim Booth’s lyrics are as cryptically catchy as always; making singalong anthems out of angst and pathos. And even though the music has a rhythm not heard at this level since the more experimental Wah Wah, this particular collection of tracks is less likely to put off the casual listener.

Opening with Bitch, a track so groovy that it oozes from the speakers is a masterstroke. It pulls the listener into a different world; throbbing bass and thumping keys propel the funky, neo-punk riff – which has a twang reminiscent of Joy Division’s Transmission – for almost half the song before any vocals come in. It makes it all the more frustrating that just as we’re getting into it, it’s over. Could we have a 12” extended version, please?

Next up, To My Surprise, maintains the up-tempo approach, albeit with a more dance edge. An instantly catchy tagline and Mark Hunter’s pleasing synths will make this a live favourite at the shows in May, but things halt somewhat with Nothing But Love. It’s the band’s current ‘single’ – although not properly released, there’s a video and it’s gaining plenty of airplay – which is great, but the song just doesn’t really do it for this particular listener. A rather pedestrian track, Booth croons the verses and hook line without it ever seeming to going anywhere. It’s far from the anthemic song some quarters (even the band) seem to think it is, despite some pleasant lyrics. Hearing it live at the small album launch shows last month didn’t do much to change this opinion, sadly.

Compare this to the next track, Attention, and we can see what the band is really capable of: a multi-layered journey with Jim Glennie’s throbbing bass and a contagious drum line. This has already proved a crowd pleaser at the launch shows, and will no doubt be a showstopper in May. Dear John is a song to dump people to for the 21st century, with the simple keys and pounding drums keeping it flowing perfectly, giving a vibe of the Pet Shop Boys covering Goblin, with a nice little whistle to kick off with.

Feet of Clay is another light and airy track that passes by far too quickly but features passionate lyrics with quite a deep intent. With a beat as flowingly powerful as a crashing wave, Surfer’s Song is an adrenaline rush put to music. Once more, David Baynton-Power’s drums compliment the keyboard perfectly.

Much more up-beat, Catapult features some wonderful melodic backing vocals (is that Saul Davis we hear there?) and is very danceable, as is Move Down South, which begins with a feel of the band’s early material such as Hymn from a Village. Pounding drums, guitar and the trumpet of Andy Diagram all build to a thrilling crescendo at the singalong lead out.

Two unusual tracks follow; Alvin is a quirky, bouncy track with Booth singing the sparse lyrics in French. It’s got the feel-good fun and infectious flavour of Sparks, or perhaps a throwaway Europop tune; making it fantastic. Whereas Waking flows heavily relying on the trumpet once more, with an almost Casio-beat backing. It’s simplistic but works.

Title track Girl at the End of the World closes the record out in style. It’s arguably the most ‘James’ song on the record, with a relatable story and instantly catchy chorus, it could be a massive hit – albeit with one word changed.

The album is certainly a strong one and one that gets better on repeat listening. It’s not too dance-heavy to alienate the ‘indie’ crowd, and has enough flavours to ensure it’s not just treading water, this is the sort of thing ‘heritage’ bands should be doing. It’s not re-inventing the wheel, but it certainly isn’t repackaging it either.