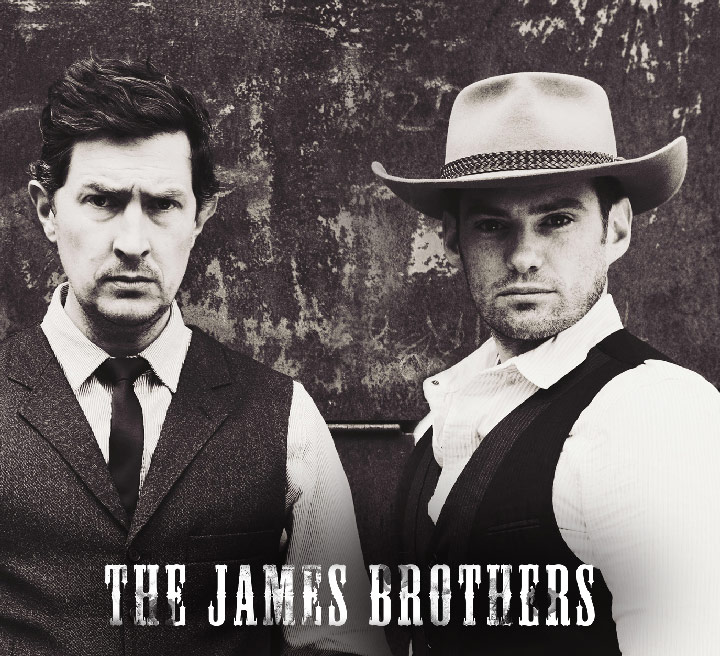 Classing themselves as purveyors of Antipodean colonial roots music, The James Brothers sit comfortably in what might initially appear to be a sparsely populated category. The outlaw image, wide brimmed hats and buttoned up waistcoats, even peering from behind bars, completes  a package which the image marketeers  would be proud of.

The duo also come with the tag line that they’re not brothers and only one is them is called James (that’s James Fagan, although Jamie McClennan  is at least in the same ballpark). However the guys do actually come from down under so at least there’s some authenticity about their provenance.  Heck (or should it be strewth?) they even offer thanks to their ‘sheilas’ (folk singers Emily Smith and Nancy Kerr) in the sleevenotes; two ladies whom the boys accompany as the  day job and passion and also in marital life too. When the first line of the album on ‘Run Away Wilder’ refers to  breaking the bars to vanish and paying the price for law breaking and based  on the prison break escapades of George Wilder, the scene is set.

In fact, you might even speculate that  the project/album feels a little like a couple of guys having a blast; taking a  bit of a jolly away from the ladies and maybe even indulging in something along the sort of lines which they wouldn’t normally do.  Mind, that’s merely  conjecture which may be a little misplaced as both musicians have a background of having  feet in more than one camp, spreading  their instrumental skills far and wide.

But together, they are off the leash,  dipping and digging back into their roots and actually, the whole thing does actually sound like great fun and possibly even much more akin to a recording of a session – relaxed and informal –  something the folk crowd seem to enjoy doing these days. Naturally, it’s based round the  combination of McClennan’s fiddle and the ringing sound  of the Fagan eight string guitar and bouzouki.  They’ve put together a collection of songs and tunes which finds them adding their own music or melodies, picking up the work of songwriters such as Bill Scott, the ever popular Anon.  and Tim Finn, whose ‘Six Months In A Leaky Boat’ might ring a few bells of familiarity as may Trevor Lucas’ ‘Ballad Of Ned Kelly’ – one of the great Antipodean anti-heroic icons.

The duo get  off on a few tunes as well – ‘The Snow Walk’ is a ringing combination with both guys on guitar, similarly ‘Family Tree’ yet taken at a more gentle pace. Despite Jamie McClennan’s fiddle skills, these two tunes are an absolute delight and may turn out to be the  surprise pick of the album for many alongside ‘Shearing’s Coming Round’ where their deft  guitar picking is accompanied by a vocal based round the age  old task of sheep shearing. Jamie lets his signature fiddle rip on ‘Philby’s Terrarium’ tune and on the bluegrassy ‘The Poison Train’ which see the album out in skirt hitching fine fettle.

At the heart of the album though is a sheer sense of pleasure  and camaraderie from a couple of well known names in folk. Their  mission to open up a fresh new field to an established audience is right on track.

You can find The James Brothers online at: https://www.thejamesbrothers.co.uk/.They are  also on Facebook  and tweet  as @james_brothers