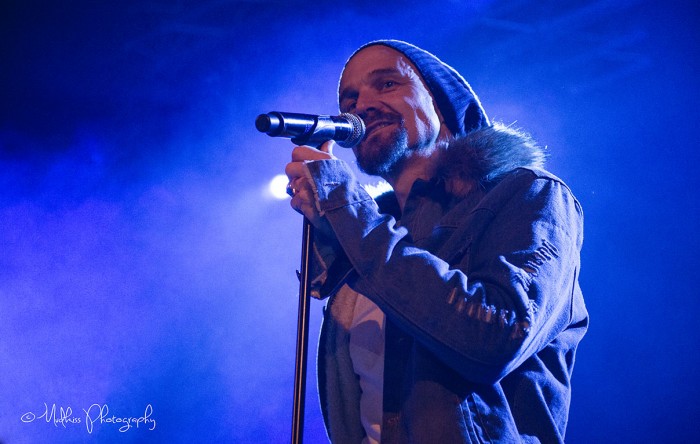 James play the first of two launch show’s for their fifteenth studio album with a hometown gig at Manchester’s Academy 2. Louder Than War’s Katie Clare (words)  and Melanie Smith (photos) went along to see what The Girl At The End Of The World sounded like at the intimate sold out show.

Fifteen albums, that is something to ponder on while waiting for the band to arrive on stage: I’m thinking my last purchase was 10 titles back and the last time I saw them on stage … was it really the Great British Weekender at Wembley Arena …. 24 years ago. It wasn’t that they didn’t deliver, they didn’t fall out of favour – but tastes expand, new options appear and time passes, in this case two and half decades’ worth of time. I’m here now with 900 people all squashed into the rectangular hanger like expanse of Manchester’s Academy 2 waiting for a band who’ll not be playing their greatest hits, nor even their latest hit’s but the launch of their new album nearly a month before it’s released. 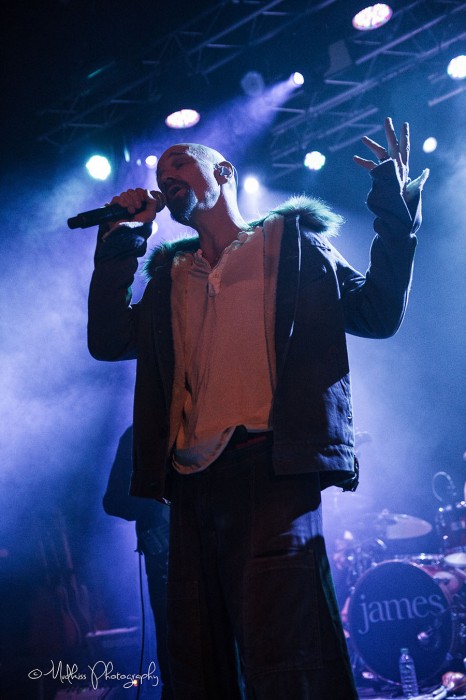 The band arriving slowly member by member to the stage, the cheers rising and rising until reaching a peak when Tim Booth takes the microphone stand his voice instantly recognisable “We’re James on the edge of our comfort zone. We’re playing songs we’ve not played before.”. True to his word they start off the night with the first track from The Girl At The End Of The World – Bitch. It is some rich, danceable electronica with some punchy lyrics that feel both euphoric and bitter, a theme which continues with To My Surprise and Catapult, which again are full of movement inducing rhythm’s and rousingly anthemic statements, both very uplifting but not managing to mask some sharp lyrical barbs.

The audience are moving, enjoying the pace and sequence of the new music and it is a surprise that we are six songs in before James pulls out a gift from their back catalog. Tim’s voice glides and undulates like warmed oil for an emotion charged On Top Of The World. ‘The view from here’s breath-taking” he gently growls. This smaller than usual venue for the band has not surprisingly proved exceptionally popular, tickets selling out fast meaning that an actual view of what is happening on stage remains elusive for many: the good thing is it is certainly sounding spectacular. 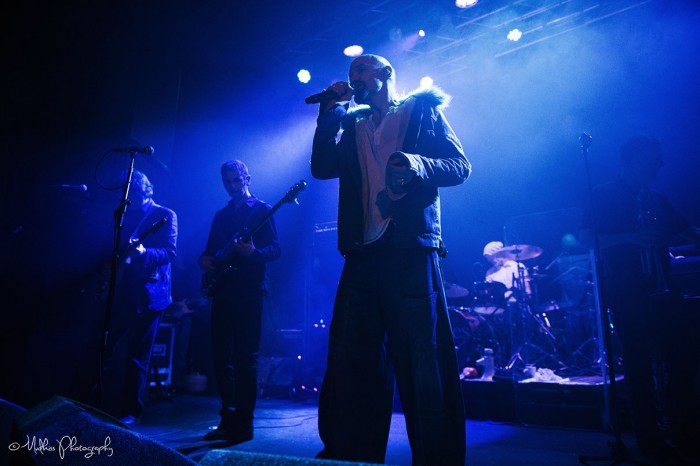 Next a trio of new tracks, Feet Of Clay, Girl At The End Of The World and Surfers Song, which continue to prove that James have continued to gracefully mature, plus confidently celebrate their musical and poetic skills that are cathartic, carefree and theatrical as well as perversely at times introverted and brooding: meaning you feel you are being given all the elements of the story to piece together into your own interpretation. It has been wonderfully indulgent to submerge in these new melodies and lines, however, it is a delight to sing out loud as Born of Frustration and allow us to shake off something of a hypnotic fog. Again I have no doubt that the physical performance on stage was utterly magnetic judging from the few small glimpses that for the briefest moments of magically energetic movement.

The band return for not one but two encores, the final song is a passionately delivered Just Like Fred Astaire, every member was amiable and contentedly relaxed throughout the show, providing essentially a flawless show of new material, even the first encore included Nothing But Love a track from the new album and rightly so that they should be confident: The Girl At The End of The World that we have experienced almost in full tonight feels like a really rich assembly of songs shaped by experiences and dreams that have taken place over time: mature but definitely underpinned by an energetic and honest passion to create and tonight has provided to be a very memorable evening.

James new album Girl At The End Of The World is release on March 16th 2016 and is available to pre-order in a variety of options from The James Shop as well as the usual retailers.

The Girl At The End Of The World Tour starts on:

There are limited numbers of tickets for some shows for full contact details of venues and ticket outlets for specific show availability and further information head to James official website. James are also on Facebook and Twitter where the band tweet as @wearejames.