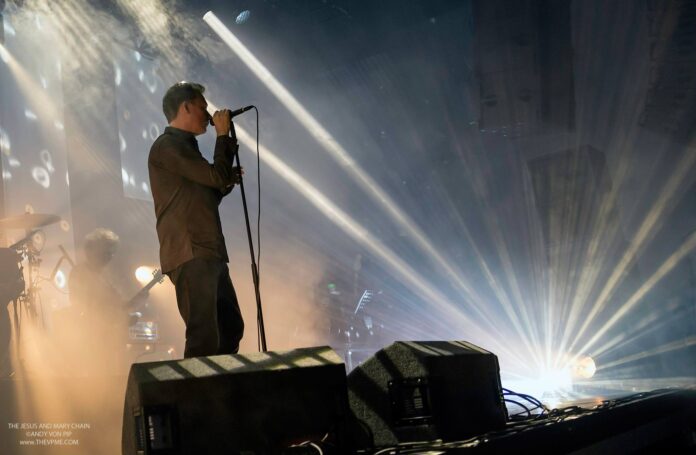 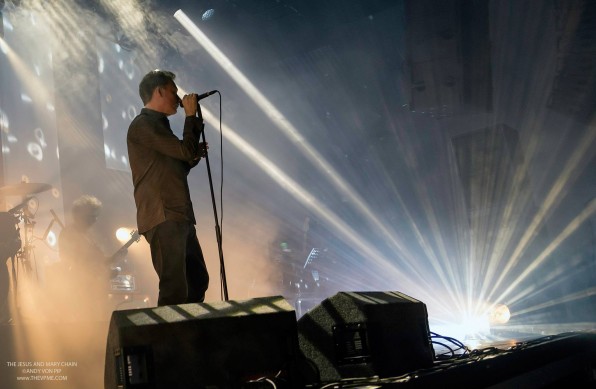 The Jesus and Mary Chain

Last night at Liverpool’s Guild Of Students The Jesus and Mary Chain kicked off their latest tour playing Pyschocandy in full. Sean Diamond was in the audience for Louder Than War.

Before the age of about nine or ten the Jesus and Mary Chain were a band I only knew from their record covers. I remember aged five or six finding a seven inch single with the title of ‘Upside Down’ in my Dad’s record collection. It’s bleak, monochrome Pollockesque flourishes of black, red and white used to fascinate me; I interpreted it as an image of a snowstorm in some faraway Tibetan valley, the type of place where you might cross paths with an abominable snowman or worse. There was also a record called ‘Darklands’ with a similarly negative yet very different sleeve, the strikingly red lettering and unfocused imagery having a similar effect on my young mind. I don’t remember hearing either of them until a few years down the line though, at the age of about nine or ten.

My parents had donated their record player to me, along with their collected record collection. I remember being enormously excited, the prospect of having such a wide variety of treasures located within the confines of my bedroom. I remember rediscovering ‘Upside Down’, its ominous cover imagery gravely nestling inside a plastic record sleeve seemingly egging me on to put it on the turnstile. ‘Go on, I dare ya.’ I succumbed. What happened next has stuck with me ever since. Underneath Joe Foster’s lo-fi, feedback-drenched production lay the semblance of a great pop tune. It was catchy, insistent, melodic even, but so unbelievably fucking LOUD! I had honestly never heard anything like it, the feedback was insane (I was yet to discover The Stooges and The Velvet Underground.) Mental doesn’t even begin to describe it! Feeling brave, I flipped over to the B-Side, a little ditty by the name of ‘Vegetable Man’. This was even more extreme, I turned it off in about thirty seconds in sheer terror. Little did I know that this was a rendition of a song by the genius Syd Barrett, Pink Floyd founder and a future hero of mine. I recaptured the experience to my dad, telling him that I thought ‘Upside Down’ had a good tune but was ruined by the incessant feedback. He laughed, explaining that this was the whole point and the reason they had garnered so many column inches in the music press of the time. ‘Psychocandy’ and ‘Darklands’ came later, as well as ‘The Sound Of Speed’. It’s fair to say I became hooked.

More on The Mary Chain later. First it’s time to sail the seven seas with Bathymetry. It’s fitting that this three piece’s name relates to the study of underwater depths, their jarringly folky pop sounds seem to transport you to the pretty coastal seaside resorts of Devon and Dorset on a gloriously hot summer’s day. Listen closely, however, and it becomes apparent that there are often traces of spite beneath the cheery exterior; dark tales of wrongdoing and death lying like grinning demons underneath the disproportionately sunny grooves. They certainly know how to make the audience feel at home, arriving onstage all smiles and informing us that we are all “looking very beautiful tonight”, but don’t be completely taken in; this lot are spitting venom over the sand castles. 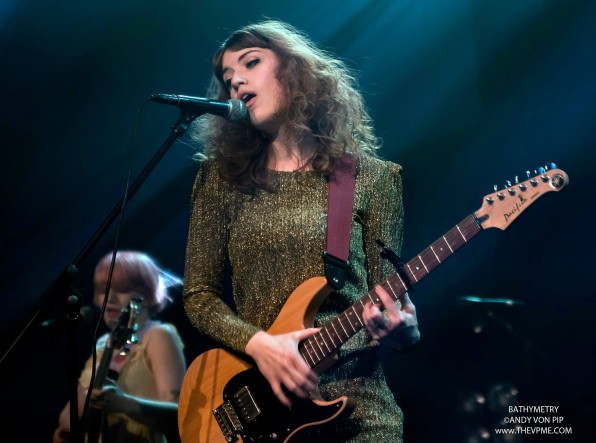 Bathymetry’s cunning levels of deception coupled with their uncanny knack of knocking out great pop tunes will surely work in their favour, just be aware of the risks involved when listening. Consider yourself warned.

Tonight’s show commemorates the thirtieth anniversary of The Jesus And Mary Chain’s debut album Psychocandy, clawing its way into the unsuspecting minds of thousands upon thousands of indie kids in the freezing cold November of 1985. It’s a genuinely menacing, intimidating affair; sounding something like The Velvet Underground if they’d hung around in gangs on a Glasgow Council Estate rather than with the Art Crowd at Warhol’s Factory, an unholy concoction of 60s girl group harmonies, spaced out smack ballads, the punk-pop buzz of The Ramones and the untamed primal feedback conundrum of The Stooges and The Membranes, balanced with some queasy, narcotic-induced imagery which would even put the fear of God into William Burroughs. Listening to it now, it feels more relevant than ever, you can hear the massive influence on the legions of alternative bands that followed in its wake; Mogwai, My Bloody Valentine, Slint, And You Will Know Us By The Trail Of The Dead and Fat White Family (to name but a few) all owe something to its trailblazing sonic malevolence. I’ve never seen The Mary Chain live before, this particular show sounds like the perfect introduction.

The Brothers Reid arrive to mass cheers, Jim announcing the plans for the night as soon as he takes to the mic. A show of two halves, first half a collection of various different tracks, the second half is ‘Psychocandy.’ Then it’s straight into ‘April Skies’. My God, what a fucking intro! Jim’s lean, iconic looks, Mark Crozer’s thundering bass, William, lost amidst a tide of smoke from the machine, a mass of curly hair protruding through the fog, reaching for the Heavens with his star spangled death riffs… magnificent stuff. ‘Reverence’ has never sounded quite so bruising; Jim howling “I wanna die just like Jesus Christ / I wanna die on a bed of spikes” over a pummelling psycho-blues racket is one of rock ‘n’ roll’s most devastatingly thrilling moments, earning itself a ban from American Radio for its troubles back in the early nineties. It is followed by ‘Upside Down’, as chaotic, perplexing and deafening as it sounded to me all those years ago, perhaps even more so. William’s incomparable lead guitar soundscapes matched with Philip King’s scratchy rhythm and Brian Young’s ominous drumming (Primal Scream’s Bobby Gillespie played on the original Creation Records recording) is akin to finding yourself an unexpected guest at a Black Mass, complete with a human sacrifice. A short interval follows, then they’re back. Psychocandy it is then.

There is barely any pause for thought during this section of the gig, a gorgeous, sugar sweet ‘Just Like Honey’ giving way to a hard rock ‘Living End’ (which prompts the first serious bout of moshing of the evening), all sounding as deliciously deadly as you remember them. ‘Never Understand’ could have come out yesterday, an ageless alt-rockabilly anthem dripping with adolescent angst and a feral sense of abandon, ‘You Trip Me Up’ glides with a triumphant insecurity, and ‘Inside Me’ is STILL one of the most terrifying moments in the history of recorded sound; tonight’s clammy, paranoid rendition elicits a suffocating sense of fear, claustrophobia and uncertainty which emanates throughout the entire venue like a mushroom cloud, one of Irvine Welsh’s worst nightmares set to music. The comparatively chilled likes of ‘Sowing Seeds’ give you a false sense of security; the set ends on a predictably Hellish note. ‘It’s So Hard’ wriggles into your system like a particularly hefty tapeworm, a nagging, winding riff colliding with chilling lines lines about things in dreams and dead poets, along with feverish cries of  ‘WALK, WALK!’ and ‘OH IT’S GOD TO ME.’ Then it ends, it’s all over, we’ve been to the Darklands and lived to tell the tale (well, only just). This isn’t your run-of-the-mill, track by track please put a penny in the old man’s hat ‘Anniversary’ show, oh no, this is all about injecting new life into an important album; living, breathing and still confounding expectations and fucking up eardrums in the 21st century, a genuinely dangerous work of art. Blasphemy has rarely sounded so beautiful, a sublime end to a sublime evening of music. Don’t miss out!

The Jesus And Mary Chain are online here: thejesusandmarychain.uk.com. They’re also on Facebook and they tweet as @jamcofficial.

With thanks to Andy Von Pip for kindly giving us permission to reprint these photos. Please give his wonderful music blog, The Von Pip Musical Express a visit.