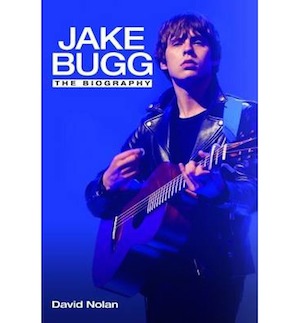 Jake Bugg: The Biography is the first story to hit the shelves about the young “King of the Clifton Delta”, whose self-titled debut album reached number one in the UK Album Chart back in 2012.

From council estate hangouts to extensive international tours, Bugg has had a whirlwind of success. Journalist David Nolan delves deep to paint a complete picture of the life of this award winning talented musician, thus far.

David Nolan has been there, done that and, probably, got the t-shirt to match. Already familiar with his early biographies of rising stars, from Emeli Sande to Emma Watson, I expected Jake Bugg: The Biography to be a cracking read. That it very much is, but this particular story has given me more insight – and quite frankly, excitement – than any of his other previous works. The rise in popularity of Bugg’s music has created a city wide music explosion that hasn’t been – and probably won’t be – witnessed anywhere else for an age. The people of Nottingham are finally gaining their moment in the spotlight – something which they have craved for a very long time. Unaware of this even himself in the beginning, it is something Nolan has quickly understood and given worthy mention to throughout this piece of literature.

At the beginning of each chapter, Nolan adds a suggestive list of three songs to listen to to compliment the content of that particular section, a mini playlist if you will. As someone who prefers to sit in silence and concentrate when reading, I was a little skeptical at first and decided to listen through the songs before embarking on the new chapter. However, by the time chapter four (He Seems Really Cool, Let’s Get Him On) came around I had been well and truly converted. It’s little quirks like this that make Nolan’s books such an enjoyable read.

The inclusion of interviews, quotes and nods towards DJ’s and others avidly involved in Bugg’s rise to fame gives a real insight into not only his background but also Nottingham’s music scene. This proves that Nolan has done thorough and extensive research for the creation of this piece of work. The book follows Bugg’s musical path from the early days of taking inspiration from his parents and guitar-giving uncle to getting signed, landing a number one album and playing main stages at some of the world’s finest festivals.

Dropping out of college at sixteen to pursue his vocation in music, Bugg’s earlier gigs were not very encouraging to say the least, playing to only a handful of people in small local venues. Not giving up, he built up his momentum and eventually was playing more gigs in Nottingham than most other musicians at that time. The biography reveals just how hard Bugg worked to try and make any kind of name for himself and I must admit to now having a new found respect for him. He’s not just some kid who’s had everything handed to him on a plate – he matured and was quick to realise that if you want something badly enough you just have to go out there and get it.

Always keeping Nottingham at the heart of the story, Nolan explains how local newspapers and venues helped Bugg achieve recognition and get his career off the ground – with a helping hand from the BBC, of course. He notes the three main events that really gave Bugg that foot in the door to the music world, one of them being a short video made for the Entertainment Guide section of the Nottingham Post. Doors steadily began to open themselves for Bugg: recordings on BBC Introducing secured radio airtime, a new manager and a slot at Glastonbury Festival. All of these things ultimately lead to a record deal with Mercury.

The book as a whole proves to be an engaging and interesting read. Jake Bugg: The Biography has something that will appeal to everyone, whether you’re a fan of his, an aspiring artist or just a music fan in general.

Oh, and if this tale does inspire you to go and take a look around Nottingham’s newly established music scene, Nolan has even included a Nottingham Glossary in the final chapter. So you’ve no need to worry when someone asks you for a “croggy” …

David Nolan can be followed on Twitter, or keep up to date with the latest news via his official webpage here.