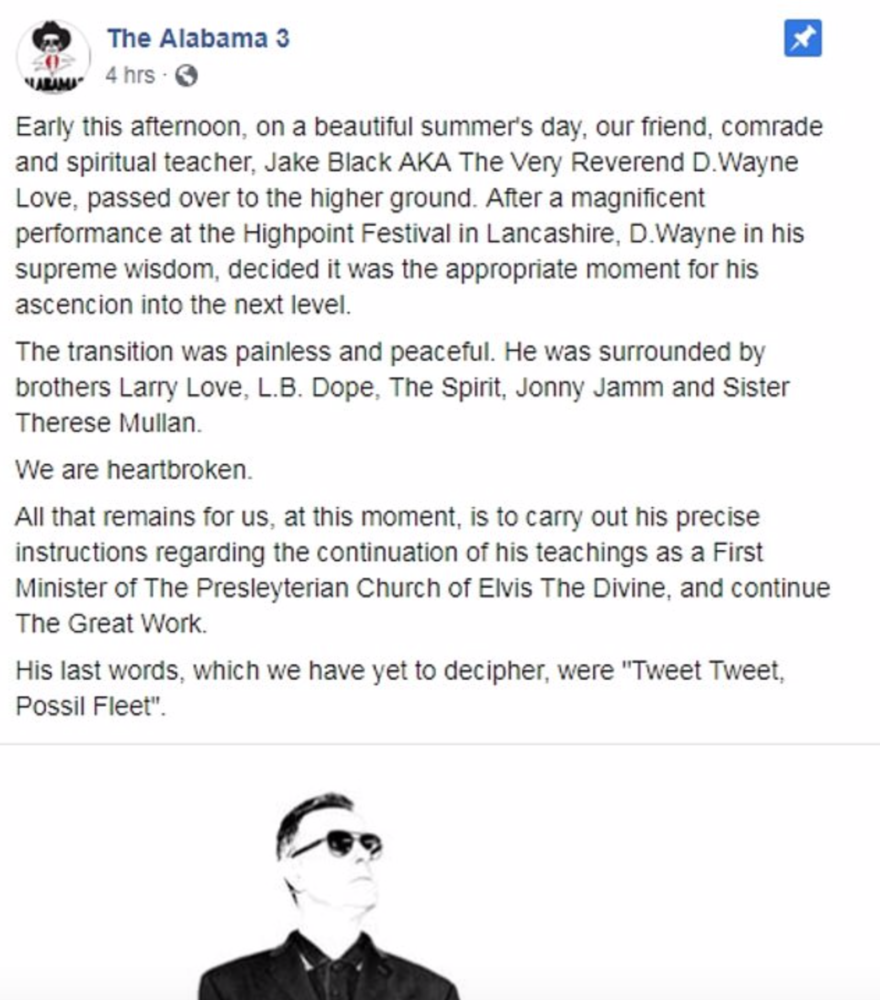 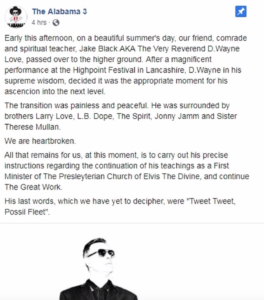 It’s always sad when one of the extended family dies.

The extended family of maverick culture.

It hits you just that bit more.

LTW has seen Alabama 3 far more times than is healthy.

We were even at their first gig.

We even knew them before they existed.

Some things go back a long way know. Stretching over the decades from punk rock through acid house and through all the culture wards. The madness. The wildness. The chemical rush of life. We may never have been sharing the same houses or same bars but it was the same stages and same lives. We were on the same wild eyed narrative. There was backstage banter and head nodding. There were bouncing packed gigs. There were mad stares and always a great pleasure in seeing one of the huge extended maverick family of punks, squatters, misfits, outsiders, too fast to live too smart to not get high succeed in the swamp of show business.

Jake was one of the fellow travellers.

Those deeply intelligent sixties kids who Black saw through the whole charade and was fired by music to create an alternative universe. His charismatic stage presence full of snark and dark wit debunked the overlords who have wrecked the planet and lives with their pomposity and bullshit. He was part of maverick crew of freaks who somehow created a musical success story with their heavy grooves and tightrope walking lives.

Alabama 3 were formed in the Brixton section of London, England in 1995 when Black met Rob Spragg, a.k.a Larry Love, at an acid house party and hit pay dirt with  their song Woke Up This Morning, which was used as the theme for HBO’s legendary series The Sopranos

Alabama 3’s official account posted a tribute to Black that both captured their sense of loss and that trademark dark humour.

“Early this afternoon, on a beautiful summer’s day, our friend, comrade and spiritual teacher, Jake Black AKA The Very Reverend D.Wayne Love, passed over to the higher ground,” the post began. “After a magnificent performance at the Highpoint Festival in Lancashire, D.Wayne in his supreme wisdom, decided it was the appropriate moment for his ascencion into the next level.”

Revealing that Black was surrounded by his “brothers Larry Love, L.B. Dope, The Spirit, Jonny Jamm and Sister Therese Mullan,” at the very end, the group said that his passing was “painless and peaceful.”

Also stating that they are “heartbroken,” the band shared that Black’s final words were: ‘Tweet Tweet, Possil Fleet,” which they “have yet to decipher.”