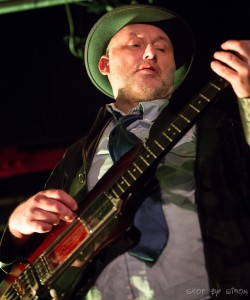 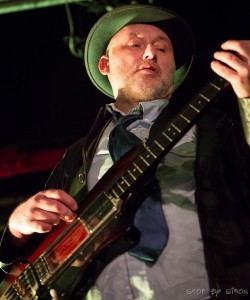 Jah Wobble’s Invaders of the Heart

Return of the Space Invaders

Again, MacArts have booked well, bringing in a journeyman whose music career started in the late 70’s. MacArts the new epicentre of cultural significance in the Scottish Borders. Where clearly there is a market with acts prepared to overcome the previous problems with the geo-logistics of coming down to the Borders. Times have changed as MacArts continues to buck the trend of music venue closures elsewhere throughout Scotland and the rest of the UK.

Jah Wobble is something of an enigma. A post punk bass extraordinaire who has far outlived the restrictions of that genre. Far smarter than the credit he’s given. He’s had his demons to face. A tough South Londoner suffering no fools gladly, maybe to an extent which has not always been favourable to his own life’s fortunes. Wobble is quite a complex character with a multifaceted approach to his music over the decades. Even taking a sabbatical to study for a university degree. Jah’s bass style and equalizer settings has resulted in a predominately heavy dub sound. More akin to reggae rather than the bright trebly bass acoustics of standard rock playing.  Many considering him quite a forerunner in a modern age. As we say in Scotland his “muckle” hands making the bass a perfect fit. An experimentalist of wide-ranging proportions who has never been afraid to bring in guest vocalists and musicians. We have seen a diverse and multiculturalist approach to his music making. Aided and abetted by fellow artists who have been happy to work with the Ex-PIL musician.

Tonight, MacArts’s crowd is likely to be filled with aficionados. The left field nature of the music has likely determined that. Think Radio 6 listeners and other peripheral stations all which have been more likely to play Jah Wobble’s Invaders of the Heart over the years. The demographic swings and roundabouts bringing us together as a collective. At least for the next two hours. The stage is large enough to house all the respective musicians but compact enough to get close enough to catch the sonic vibe. I didn’t get a set list; this was my inception to the live work of Jah Wobble thus this is more a descriptive synopsis from my clean slate.  The light and sound work concurrently. Sound engineer David Coyle’s superlative mixing and engineering skills are greatly received and enhance the sonic soundscape. The acoustics of this old renovated church is of pure quality, driven by a crystal clarity and a sonic triumph for our aural senses.

Coincidentally the show has been scheduled during the annual Galashiels’ Gala day/Common Riding week. What overlaps exist I can’t ascertain. But Galashiels is somewhat an enigmatic melting pot of differences. That’s a positive characteristic of this Border’s town. Standing here as I philosophise and dare I say psychoanalyse (Jah did mention Nietzsche at one point) about the merits of the show in front of me. There is a lot of goodwill and reciprocal appreciation on show. Acknowledgment is a two-way process. The music itself cuts a groove mixing modernity with neoclassicism. It sounds fresh and contemporary yet still hinges on a paradox of standard values and historical music foundations. It displays a hybrid of different influences: Jazz, Dub, Techno, Prog-Rock et al. A three-minute thrash it is not. Connoisseurs of the finest rock music, in its wider context, have to branch out, think outside the box and above all be tolerate. The music tonight requires that quantum leap. It’s has a certain complexity and requires our attention as our synapses fire in unison with the sound stimuli. Creating an atmospheric of appreciation and receptiveness.

Alcohol induced merriment blended with the heat of June’s summer cauldron culminates in high expectations. We are not disappointed. We get it that Wobble’s bass is a driving force but the drum signatures, often with up-tempo BPMs is a source of additional energy emanating from tonight’s king of rhythm Marc Layton-Bennett who has a proper full drum kit, not these half kits so common these days. And boy can he play!  This bass and drum correlation are indicative of the band’s modus operandi. The music is superimposed by the additional musical virtuosity of session like players, pianist George King and guitarist Martin Chung. We are exposed to elements of world music that far overwrite standard contemporary pop. But this audience is receptive to the vibes. And although not specifically “pop” there are dance elements within as we see pockets of the audience looking good on the dance floor. Further deviations from the pop paradigm are present during many of the instrumentals within the set. There is almost a Zappaesque jazz feel to some of the avant-garde arrangements. There are few songs played that feature vocals as the main body of the set are instrumental based. This in no way debases the performance, it results in a dynamic that allows the musicians to prosper. Guys that are simply at the top of their game.

Jack Dee is arriving in Galashiels soon for a night of comedy. But Jah’s deadpan adlibbing between songs is drier than a summer drought and he may have beaten Jack to the punch. Or more precisely the punch line! As Jah has the audience in fits of laughter at certain junctures. A diamond geezer he is. cSo tonight, we got music, comedy and philosophy and overall a grand night out. It surpassed all my expectations and by the end of the show I felt contented as the Stella had also kicked in. A grateful audience and another spectacular night at MacArts.

Wish you were here…