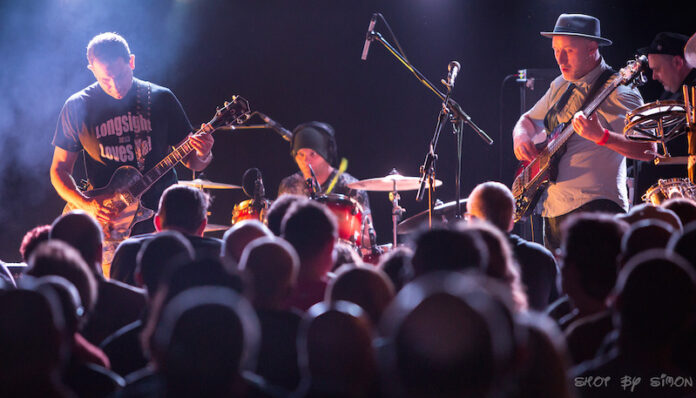 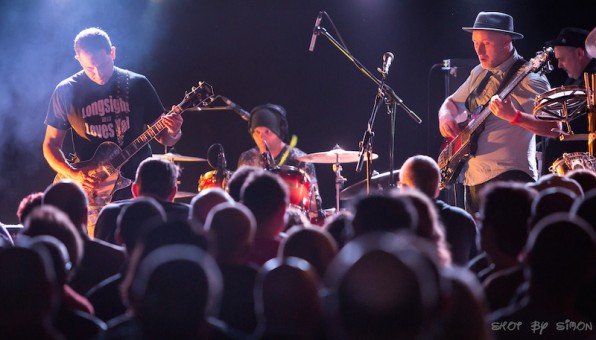 Jah Wobble and The Invaders of The Heart ,

Born John Wardle in 1958, it was Sid Vicious who in 1973 spawned the name Jah Wobble after a few too many and also donated the bass guitar which set ‘Jah’ off on a long, winding and wonderful musical journey. Louder Than War’s Tony Early was there when they hit up Manchester. 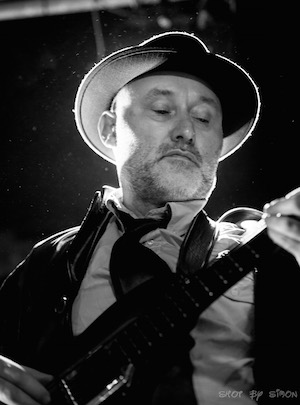 After playing his distinctive ultra low bass with John Lydon in PIL for a few years, Jah left to pursue his own ideas. In the intervening three decades he worked with countless well-respected musicians, playing a multitude of genres he also haz his own label ’30 Hertz Records’ all of which probably explain the cornucopia which was so well received tonight.

After a touching rendition of The Last Post (it being Remembrance Weekend) by Martin Chung on solo guitar, came a collection of talented musicians playing songs from a huge variety of genres spanning the 70s, 80s and 90s. Liquidator, The Sweeney, The Chain,Get Carter and even a bit of John Barrie’s Midnight Cowboy, who Jah said was a personal favourite.

If this all sounds like just a night of moribund cover versions, nothing could be further from the truth. Each was taken in a different direction and jammed with in jazz, dub, world, ska etc. soundbytes and a haunting female vocal floating through the mix, keeping the attentive crowd guessing what was coming next. Some of the ambient work was both electric and eclectic!

Jah himself has a wonderful stage presence, with a great line of humour and a compelling cockney accent. The man can hit a mean drum beat, too! Part way through the set, Martin on guitar gave way to Aziz Ibrahim, a Manchester lad of quite some heritage and always great to behold. Tonight was no exception, with Aziz’s Longsight via Lahore pimped guitar licks the perfect foil for Jah’s Eastern trance and Marc Layton-Bennet’s tabla beats. 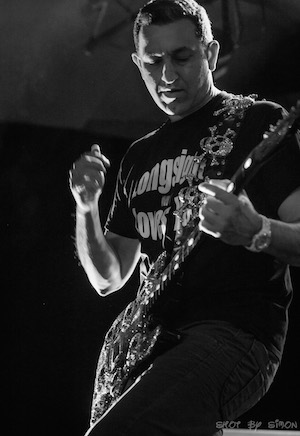 The atmosphere in Soundcontrol crackled with anticipation throughout the show, and Jah Wobble did not Wobble. In fact, he runs the tightest of ships. All the band played in a manner that was intoxicating and, at times, almost hypnotic. A sublime rendition of his ‘Visions of You’ track and a touch of Agustus Pablo thrown in before the break for the encore, during which we were entertained with not one, but two, songs from Jah’s PiL days.

First up was the song Public Image, played in a manner surpassing to the original. To finish off we were treated to another P.i.L. classic, Pop Tones, played in a hypnotic dream state, for about seven minutes!

At the end of the day, at Sound Control, Jah Wobble controlled the sound to a very happy, appreciative Manchester audience!

Don’t worry if you missed this one; with a new album due out in the New Year and a redux of previous material I wouldn’t be too surprised if there are some more gigs coming up in the not too distant future. I, for one, will be at the front of the queue.

Jah Wobble’s website is here: 30hertzrecords.com. He can also be found on Facebook and he tweets as @realjahwobble.

All words by Tony Earley & Simon Lee. This is their first post for Louder Than War.