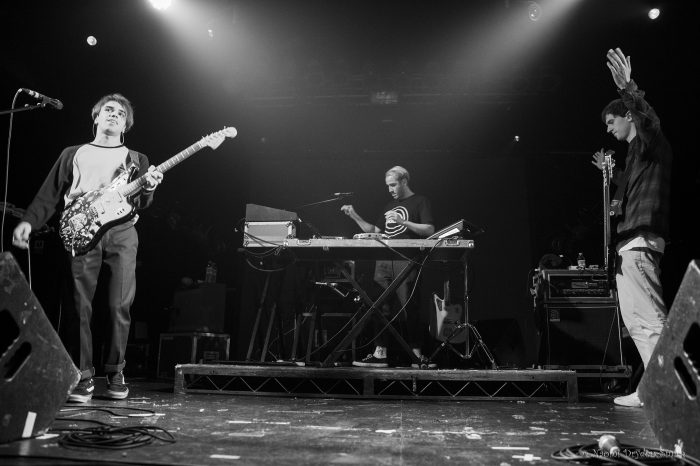 For anyone who enjoyed the heady heights of acid house, the loose fit of baggy and the perfect pop harmonies of the Beach Boys, Jagwar Ma were always the answer. Touted as a modern day Primal Scream, the Sydney trio’s uplifting 2013 debut album, Howlin, truly was a ground-breaker for anyone who hadn’t experienced the loped out grooves of 1989 or for those who simply wanted to revisit the era.

Judging by tonight’s sold out crowd, Jagwar Ma are a band fully in demand. There’s a perfect dynamic to a Jagwar Ma show, sometimes it’s dark and dense with Gabriel Winterfield’s off-kilter vocals echoing barely around the room, and sometimes there’s beats and bass and grooves piling on top of each other, desperate to make you move like it’s the new age Hacienda. Because, try as hard as you can, it’s impossible not to dance, or sway or keep still tonight.

The band have a perfect energy on stage; they don’t really say much because their swirling, psychedelic wig outs speak clearly enough for everyone. The lights are relentless and the vibes are positive. The tunes from latest album Every Now And Then come right at you, loping out for minutes upon minutes, letting you know that whilst their music is shimmery, pop goodness on record, it takes on a whole new beast live. The tight harmonies of the album are stretched and disorientated, Give Me A Reason in particular clocking in at around ten minutes long.

You would think, considering the new album is so fresh on everyone’s palate, that it wouldn’t be greeted as rapturously as the old gems. However, OB1, which in my opinion is the best song of 2016 so far, as well as their best song to date, is met with more vigour than The Throw or Come And Save Me. It’s clear the band heavily rely on Jono Ma’s beats making in the background creating the narrative for which the others bound along to.
A constant, technicolour dream from start to finish, Jagwar Ma are solid proof that you can be inspired by the past but still live in the moment.

All words Harley Cassidy. More writing by Harley on Louder Than War can be found at her author’s archive. She tweets as @harleycassidy.

All photos by Naomi Dryden-Smith. You can find more of Naomi’s work for Louder Than War here, and she tweets as @nomeshome Also on Facebook. Naomi’s Photography portfolio can be found here