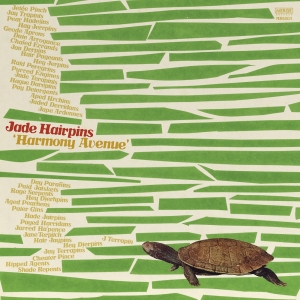 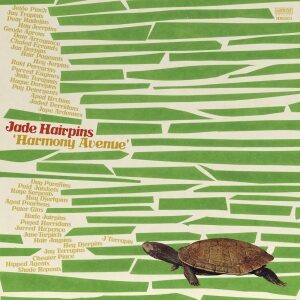 With Fucked Up on hiatus Jonah Falco and Mike Haliechuk have taken their side project Jade Hairpins to the next level.

Rather than just hang around waiting for Fucked Up to start recording again drummer Jonah Falco and songwriter/guitarist Mike Haliechuk decided to really kickstart their side project.

Jade Hairpins began life as a 12-inch on Merge Records, released at the same time as Fucked Up’s Dose Your Dreams, but since their main band is on hiatus they’ve had time to record a whole record of post punk influenced pop.

Falco has emerged from behind the drumstool to become the frontman and main lyricist pulling together a band in London where he is now based.  So no surprise he is claiming ironic British popsters like Orange Juice, New Order and Scritti Politti as influences, but there are also real shades of Talking Heads and Jonathan Richman’s wit here.

The surreal, slightly manic J Terrapin sounds a bit like the theme tune to The Big Bang theme as Falco yelps away revealing he (rightly) hates the boring Theremin. The slower (Don’t Break My) Devotion has some cool Gang of Four Guitars and spooky Devo like vocals.

Falco now seems to be a big anglophile penning a tribute of sorts to Broadstairs Beach, while Truth Like a Mirage is a nod to the eighties full of synths and self-lacerating lyrics.

Dolly Dream gets close to the Postcard sound the band claim as an inspiration, and the rolling synths and bleeps of Motherman could be an LCD Soundsystem outtake.

Given Falco has swapped the sticks for frontman duties this is a pretty impressive debut, even if it does lack wear its influences a little too much on its sleeve, which they are clearly smart enough to rectify on their next record.