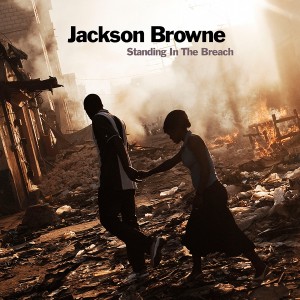 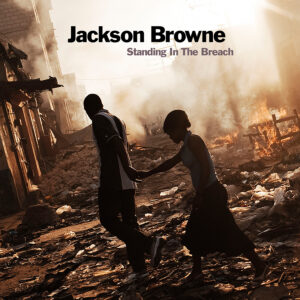 Jackson Browne: Standing In The Breach (Inside Recordings)

The new Jackson Browne album, Standing In The Breach, his fourteenth studio LP, is classically, monumentally and colossally Jackson Browne. Period! He cleverly holds a mirror up to a heavily dichotomous and divided America, but not before revisiting that gentle easy groove of yesteryear in his first two tracks, The Birds of Saint Marks (the album’s first single) and Yeah Yeah.

The opening track was written some years ago when Browne lived in the Parish of St Mark in New York City. In the second track we hear more from the man with the long love affair with love, before we start to see glimpses of the old politicized Browne that we know and love, Rock n Roll Hall of Fame inductee that he is.

In his heyday, reviews of his music may have been found, somewhat unfairly, in the ‘middle of the road’ or ‘easy listening’ sections. His ability to write pithy, intelligent songs with a strong melodic keynote has not diminished with time. If anything, Browne seems to have galvanized this ability with the passage of time, he’s become sophisticated – yet simple.

After first listening to Standing In The Breach, in its entirety, the listener is left feeling exhilarated and suffused throughout with a sense of hope, not just for the world, but for the world of music as well. There are such majestic pedal steel nuances on Leaving Winslow that the heart soars. Freddy Fender Eat Your Heart Out!

Browne, who utilized some of the best session players in his home town of Los Angeles in the 70s, 80s and 90s, sensibly falls back on old stalwarts Val McCallum and Greg Leisz to cultivate a well-established interaction that has already been through a baptism of fire. The result is not so much formulaic, it is more like a good time-tested recipe for Victoria Sponge; rich, buttery, fluffy-warm and fruity.

Make no mistake though, in The Long Way Round, he’s not baking comfort food for the angst ridden, addiction prone masses: its ‘a rotten road’ through Tinsel Town: if one wants to make an omelette, one must break eggs, or at least revisit the dark side of life.

“Its never been that hard to buy a gun” he sings, his moral compass spinning round and round. Look back but don’t stare!

In Walking Up and Down, – the day his “heart got given to the rhythm of the train” we encounter a country western/bluesy number, with alliterative use of ‘an octogenarian lady’s man’ and an ‘oxygen tank’ , this may well be a self-deprecating dig at his own age… There is, however, definitely something soothing about this groove that also conjures up questions about how much Browne remains true to the old analogue, two-inch- tape aesthetic of the 70s or, conversely, the new Pro-Tools generation in digital recording. All good stuff to make enquiries about when he hits the UK later this month…

If I Could Be Anywhere evokes images of Browne’s quasi-spiritual life and disposition, not in a pretentious Californian manner, but more in the acceptable sense that here is someone who does not think the grass is greener elsewhere. Someone who, in time and space, is happy and content. Right here, right now. This song resonates in the same way spiritual classics The Power of Now and L’abandon a’ la Providence Divine resonated for me. It made me wonder whether this album might actually be Browne’s crowning work – his magnum opus?

In You Know The Night, the listener is struck with the notion that this artist has aged like a 1966 bottle of Chateau Mouton Rothschild on the rack of a World Cup Winning England player. Which Side? seems to ask the listener to take sides on either side of polarized America. It has a Dylanesque metre to it reminiscent of Serve Somebody, and is very FM, radio friendly. Jackson Browne is a long term advocate of the environment and has impeccably ‘green’ credentials. This is a charged song, having a dig, rightly so, at Halliburton, the likes of Dick Cheney and fracking- the blatant rape of the planet. Good on him… This is my personal favourite.

The title track grasps the nettle with the issue of poverty, the haves and have-nots. He portrays the world as dichotomous; rich and poor; good and evil; caring and uncaring. This man authentically cares, and we love him all the more because of that.

This band is Val McCallum (guitar), Mauricio Lewak (Drums), Jeff Young (keyboards) and Bob Glaub (bass), and in addition, acclaimed multi-instrumentalist Greg Leisz (guitar, lap steel, pedal steel).
Catch him at the one of the following dates of his Autumn Tour: