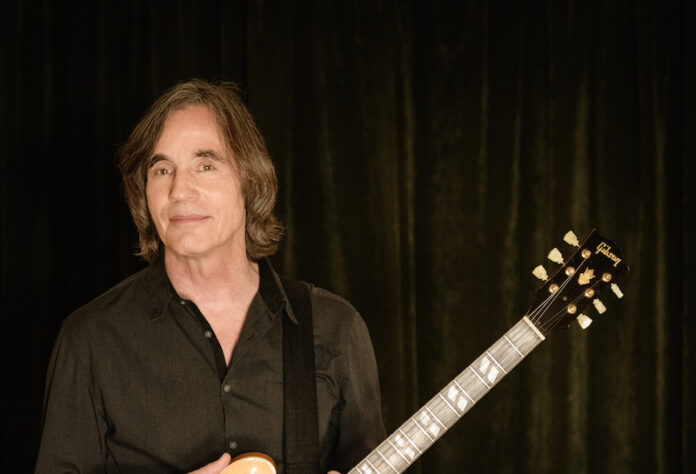 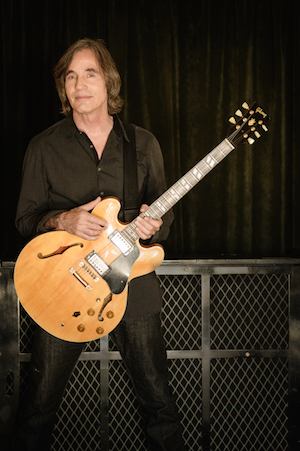 Interview with American rock singer-songwriter and musician Jackson Browne who has sold millions of albums worldwide. Harry Mulligan sets the scene and asks the questions…

Spending my formative and teenage years in the sunny climes of America’s Pacific Northwest, listening to DJ’s Iris Harrison & Marty Party on KGON’s FM Radio, Jackson Browne was as staple a part of my diet as porridge oats is to a proverbial Scotsman. I remained in Portland to the early nineties, and songs like Running On Empty, The Load Out/Stay, Here Come The Tears Again, You Love The Thunder, and Before The Deluge all spoke straight into the emotional bedrock of my life.

Seemingly, I’ve come to associate him and his music with sunshine, hope, justice, love and a new vision for tomorrow. It’s not beyond the call of duty to make this man and his music more accessible to British kids in 2014. It feels like we’ve travelled across oceans of time together to have the pleasure of experiencing and hearing Standing In The Breach, the latest album from Browne.

I had the pleasure to ask him a few questions prior to his visit to the United Kingdom, his responses can be found below this stream of Standing In The Breach, (which is only available in the UK.)

Harry Mulligan: If anything, what’s the message from your most recent album, Standing In The Breach, that you would like to communicate with the music -listening world?

With this coming tour, how are you managing to repackage the nuances in your music?

Well, it’s not a packaging. It’s just being in a band. It’s an act of discovery. You know a certain amount of the songs you’ve been playing are songs you’ve played many times before, and you have a band that- you know, play them professionally.

They all played on the current album. The configuration is really, really exciting. It’s an exciting band for me. They’re also exploring some of the older songs. I’ve played with all of them at different times.

JB: But it’s a great combination. It’s a particularly vital sort of Line-Up. There’s Jeff Young, who sang with me on past albums and plays keyboards, and played organ on the record, and sings. He sings on songs like I’m Alive, Late For the Sky and Barricades of Heaven. He’s not on the recordings of those songs, except Barricades, but I have him singing the harmonies live.

I’ve got my long term drummer, Fritz Lewak – Mauricio Lewak, but we call him Fritz though, playing drums, and then *Bob Glaub is on bass. He’s on the record too. He’s played on everything from The Pretender to That Girl Can Sing and Blvd. (*Bob Glaub is a bass player who played with Journey, Steve Miller Band, John Fogerty, Bruce Springsteen, Bob Dylan, Neil Diamond, Linda Ronstadt, Stevie Nicks, Warren Zevon, Dusty Springfield, John Lennon, & Crosby, Stills and Nash).

Greg Leisz and Val McCallum, they’re the two guitarists. They were each on nine out of the ten of these songs. So they’re on eight together and are fantastic. It’s an amazing chemistry these two have together. Greg’s the most instrumental. He’s like David Lindley. He’ll go from a lap-steel to twelve-string to electric. It’s very difficult to describe what he does in so many words, but he’s a natural player. He’s extremely, you know – in demand. He plays with Bill Frisell. He was in Clapton’s last band, his most recent band I should say.

It’s exciting for all of us I suppose. Yeah, I think repackage is an unfair term – it’s not the way I think of it. We’re going to play the songs, and make them resonate with each other. That’s how we’re doing the shows. We did a certain amount of touring in the States and are about to come to England. We’re going to be coming to Scotland too (laughs). You know, I will be very, very happy to be in Scotland. There’s literacy, you know?

Yes, of-course. But, no, I mean, The Words! The Language!

What is there in the way of love songs on this album? How do you reconstruct this notion of love?

Well, I don’t know if I’d use that term. There have always been songs… I’ve always written about relationships and about love. I mean it’s the way you look at it. I’ve always tried to express myself in those terms from the beginning of my writing, and I suppose that impulse is still with me…

Well, that’s a pretty broad subject, but I’m one of the people that voted for Obama in the last two elections; both elections. There was a hope that in his Presidency, he would bring us into a new way of distributing more equitable policies, and new laws would come into being. In the way of addressing political issues that have been with us for a long time really, that have been with us since the civil rights era.

The whole world gets more complex as Geo-Political situations get more precarious, whatever… The Worlds ecology! There are so many very serious ecological developments like the collapse of the oceans, like the threat of global warming. That there would be more progressive voices, that he’d (Obama) be more accessible to the voice of the people-to the solutions. I think his Presidency reflect the most deep and bitter division in our society.

It’s impossible not to see the hatred of what his policies are opposed to. There are those people who simply want to see his Presidency fail – and obstruct his Administration, the people who rather childishly want to take control of the steering wheel as we hurdle towards this wall. That’s one of the most astounding things about democracy in The United States – that’s completely stalled- is this important decision to allow corporations to donate any amount of money to a political campaign. That any Road to a Sacred Place can be overwhelmed by money from who-ever-has-got-the-most-money! It’s just a way of saying that democracy is broken in The United States.

Yeah, and you know, I’m in Spain at the moment. In Barcelona, in Catalonia they’re having an independence vote, very much inspired by the one that was to take place in Scotland. I only heard last night that the vote had already happened. It got confused in my mind. The vote in Spain is about to take place in November. However, your country decided to stay in Britain?

Yes, the people in Scotland voted for a continuation of the Status Quo!

What do you think of fracking?

Fracking is a tremendously, destructive and most violent way of extracting resources, and propping up a business world, that if it doesn’t change, will be disastrous to the natural world. Fracking has got to Stop! It’s got to be stopped. It’s going to decimate the natural world. Most people who defend it are short-sighted and completely ignoring the will of the people, our people, our country! They’re destroying the land’s ability sustain life. With fracking, I think what’s happening in terms of global warming and what’s happening in the oceans, humanity’s continuation, The Continuation of Humanity…

I’m trying to sum this up as I speak, but it’s very fucking difficult – excuse me swearing. It’s part of the threat to human existence, but the planet will survive. Humans won’t!

Jackson, thanks so much for taking the time to speak to me this morning. I feel privileged. I’m also really looking forward to seeing you at the Royal Concert Hall in Glasgow.

I’m really looking forward to that too. That’s a great sounding room. I always love to play Glasgow, and Edinburgh for that matter. Well, yes, thank-you so much for taking the time…

Jackson Browne can be found online here: jacksonbrowne.com. He’s also on Facebook and he tweets as @SongsOfJBrowne.