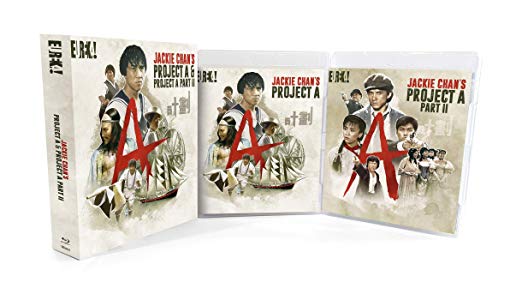 Set in Hong Kong during the last days of the nineteenth century, Project A was Jackie Chan’s most ambitious directorial effort at the time of its making.

Jackie, who also co-wrote the film, plays Dragon Ma, a sergeant in the Hong Kong Marine Police, or Coast Guards as they’re known as here. These men are assigned the task of ending the reign of some ruthless pirates led by the barbarous San-Po, who have been successfully plundering vessels sailing off the shores of Hong Kong.

With a reputation for incompetence, the Coast Guards are mocked by the onshore police force and although both sets of men are law enforcers, some banter between them leads to an extended – and very funny – bar brawl.

This you will not be surprised to read if you’re a Jackie Chan fan, is not the last big fight in the movie. Again, fans will know that the plot here is not nearly as important as the action and, believe me, there is plenty of action to enjoy in Project A. 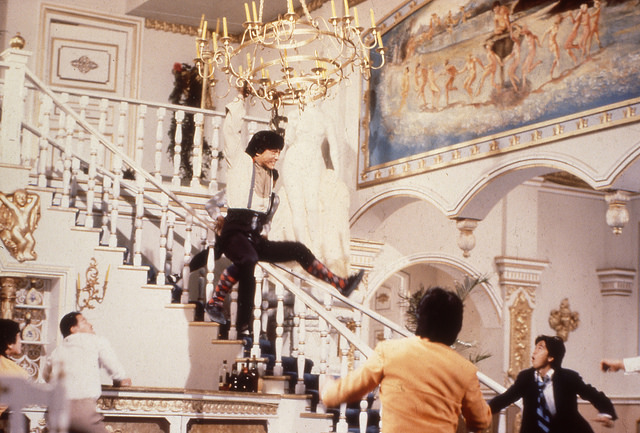 There’s another huge brawl inside a very swanky members only club, a fantastically inventive bicycle chase that takes place in a maze of cramped alleyways, and finally the inevitable and spectacular showdown with the pirates where Chan is at his acrobatic best.

If I had to plump for a favourite moment, though, it would be the homage to Harold Lloyd’s spectacular stunt from Safety Last!, with a handcuffed Jackie Chan hanging from a sixty feet high clock-tower. He falls down over two flimsy awning canopies before hitting the ground. It’s said that it took a week for Jackie to build up enough courage to perform the stunt.

He liked it enough to show two different versions one after the other and then gave screen time to a third version – which went seriously awry – as a blooper during the closing credits. You will wince while watching this. 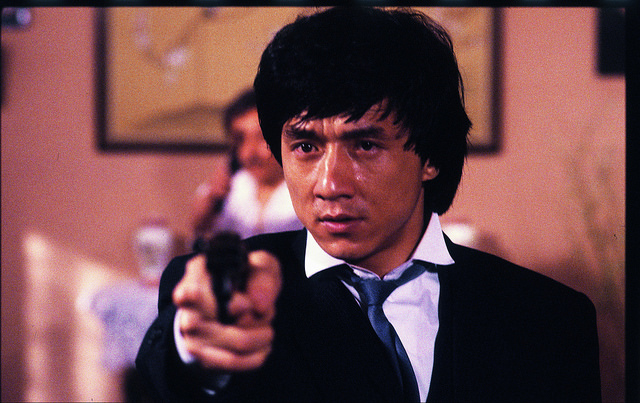 Sequels, as we all know, rarely match original films. The terribly named Project A pt II, isn’t one that bucks this trend but it’s still a enjoyable watch with just as many, if not more, stunts than the first film.

This time round, a promoted Dragon Ma is sent to the Sai Wan district, a notorious area where the police tend to be every bit as crooked as the local criminals – who include some of the pirates who had previously worked for San-Po. Discovering that their former foe has been stationed in the neighborhood, they vow to take revenge.

Dragon must also sort out corrupt police head ‘Three Rings’ Chun, who is in cahoots with a fearsome gangster, Au Sum-Fu, known as the Tiger of Sai Wan. The Tiger runs the local casinos, brothels and opium dens and it’s in the latter that Dragon Ma will take on him and his men in an exhilarating confrontation.

Sammo Hung as Dragon’s chubby rogue pal Fei is absent here apart from the opening credit recap sequence but on the plus side there is Maggie Cheung in terrific form as Yee San, a fundraiser for revolutionaries hoping to bring down the Manchu government on the Chinese mainland.

The attention to detail here is again meticulous, the action is often dazzling at times and there’s another inspired homage, on this occasion to Buster Keaton’s Steamboat Bill, Jr with a wall falling on Dragon.

Presented from brand new 2K restorations and fully uncut, Eureka Classics presents Jackie Chan’s Project A and Project A Part II for the first time on Blu-ray in the UK in a special Limited Edition Box Set.

Together, these two movies make up a satisfying package for kung fu enthusiasts and comedy fans.

Extras include optional English subtitles; archival behind-the-scenes footage; interviews with East Asian cinema expert Tony Rayns and many others; collector’s booklets for each film and more.

For more on the film: https://www.eurekavideo.co.uk/classics/jackie-chans-project-and-project-part-ii