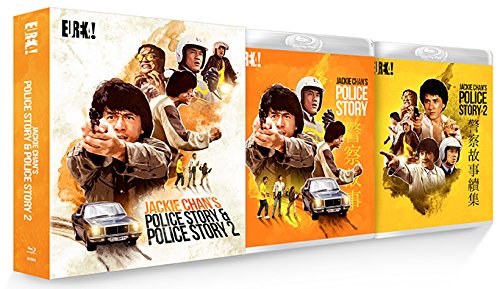 In the wake of Bruce Lee’s early death in 1973, Hong Kong studios tried their hardest to find a successor, or at least maybe con the public into thinking their movie had some connection to the dead star. A Bruce Le appeared and a Bruce Li, Bruce Lea and Bruce Lai, while film titles followed the cash-in trend. There was Enter Another Dragon, Enter Three Dragons and The New Game Of Death. And that’s just for starters.

Some producers attempted to push Jackie Chan as the man to take on Lee’s mantle but as Chan has explained, he never wanted to be the next Bruce Lee, only the first Jackie Chan.

Watch Police Story and you’ll see that he bears as much resemblance to Buster Keaton as to Bruce Lee.

One of the most enjoyable 1980s action films from anywhere on the planet, the plot of Police Story, it would have to be admitted, is really just an excuse for spectacular sequences with some of the best choreographed stunts you’re ever likely to see. 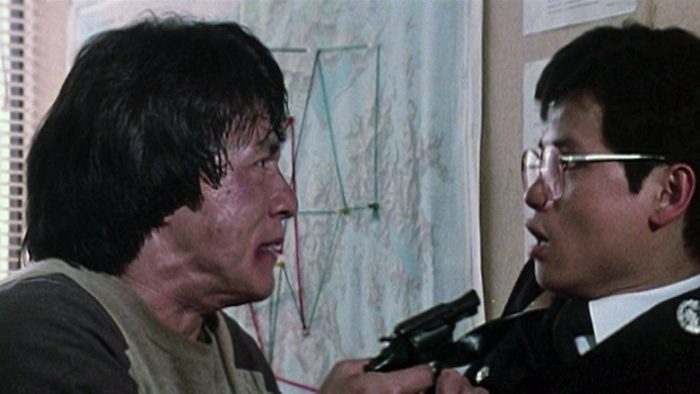 Chan kickstarts his film brilliantly with a shootout between cops and Chu’s gang that builds towards a car chase that obliterates a mountainside shanty town. This sensational sequence is directed with a high-octane pizzazz, and ends with Ka-Kui’s attempts to arrest Chu and his henchmen on a hijacked double-decker bus, an umbrella coming in very handy as he does so. But I should say no more.

Throughout the film, viewers may wonder how Chan could top the opening. He does during a climactic confrontation between Ka-Kui and the same men inside a shopping mall, that is almost reduced to rubble. Amazing stuff and local glaziers must have been kept busy for weeks afterwards. Like Nick Lowe, Jackie Chan obviously loves the sound of breaking glass.

I won’t be the first reviewer to note that the middle of the film does sag at times. The comedy element is almost as childish as the set-piece stunts are ingenious: there are pies in the face, fart jokes and Jackie standing on dung and accidentally breaking into a little moonwalk while he attempts to wipe it from his shoes.

During the action, though, you have to be glad that Chan never went down the Bruce Lee clone road.

Police Story became a massive success, especially in East Asia and, according to Chan’s autobiography, it’s his favourite of the films he’s made.

Inevitably a sequel was commissioned and Police Story 2 takes up where the first film left off. Ka-Kui is demoted due to his recklessness although his days as a traffic cop are never going to last long. Meanwhile, Chu has been released from jail on compassionate grounds, after Swiss doctors have diagnosed him as having only three months to live.

Before too long, he sends his men to harass Ka-Kui and his girlfriend May. Not only that but Ka-Kui also has to deal with a group of explosive experts, who have bombed a shopping mall just to demonstrate their prowess before raising their blackmailing ante.

Despite being more consistently paced and realistic in tone, Police Story 2, like many sequels, just fails to match the magic of the original. There is, though, much to enjoy, not least Jackie’s natural charm and yet more stunning stunts and fight scenes, best of all being the completely over the top rumble in a fireworks factory. Expect, erm, fireworks in more ways than one.

Fully uncut and presented from new 4K restorations, this Eureka Classics release of both films sees their UK debut on Blu-ray.