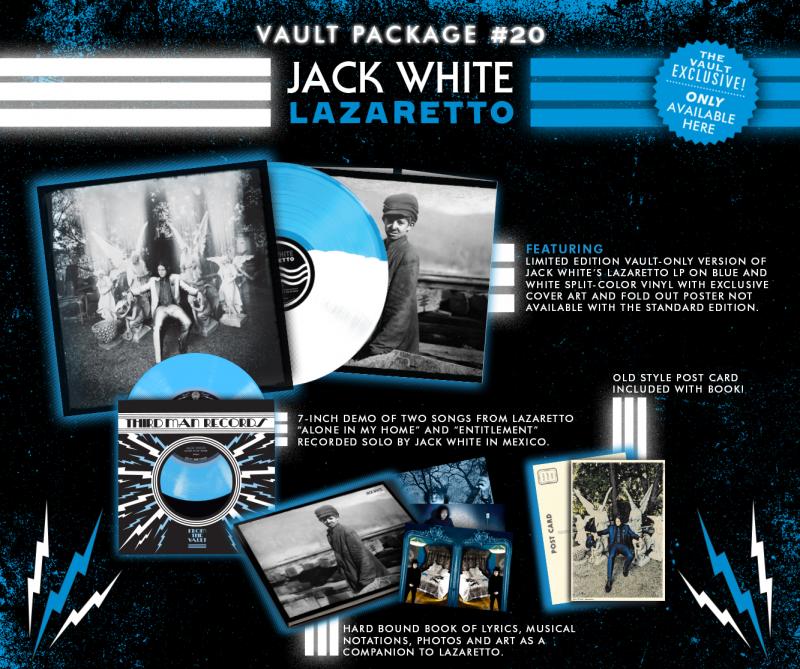 Above is the new cover art for Jack White’s third album, Lazaretto, which is due out 9th June. We’ve also been teased today with a track off it – High Ball Stepper – which you can stream below.

Lazaretto will be the follow-up to gold-certified international #1 Blunderbuss. Naturally it’s to be released on Jack’s own Third Man Records / XL Recordings. It’s also being accompanied by a special lazaretto vault package, full details about which can be found here: thirdmanrecords.com/vault, where the package can be pre-ordered. This info is also pasted in below the video which, lets face it, is probably why you’re here!

The album will be preceded by the first single and title track off it “Lazaretto,” which will come out later this month. We’ve also been given a first taste of music from the album in the form of a video for new instrumental track “High Ball Stepper”:

In celebration of the new album and their 20th Vault package, Third Man has unveiled their most unique Vault package yet.

The LP for Third Man Records’ Vault package #20 will be the ONLY limited version of Lazaretto to be released. Pressed on split-color blue-and-white vinyl and coupled with exclusive album art, this alternate presentation of the album is both insightful and deserving. Also exclusive to the Vault is a fold-out poster accompanying the album, featuring a classic National Archives photo that serves as a recurrent image throughout the album art.

Unlike the lightning bolt and inverted lightning bolt pressings Third Man did for Jack White’s Blunderbuss, this alternate art and colored vinyl will be the only time ANY variation on Lazaretto will be made. Once subscriptions are closed and records are pressed… that’s it. Don’t sleep. Get in now or regret it later.

The 7-inch includes two early demos of songs that appear on Lazaretto in their completed form. Both “Alone in My Home” and “Entitlement” are solo recordings by Jack White, done while he was in Mexico. Pressed on lustrous blue vinyl and housed in the standard felt-weave, die-cut Third Man Vault 7-inch sleeve, both tracks offer a unique glimpse into the creative process and evolution of a song from it’s original germination to its final delivery.

The bonus item is a lavish 40-page hard bound companion piece book full of lyrics, exclusive musical notations, photos and art from Lazaretto. This is the perfect accompaniment to the listening experience and insight into both the album creation method and some of the inspiration (visual and otherwise) behind it.

In addition to these items, Vault package #20 will also include a linen, letter-pressed postcard with the same eye-popping colour separations as evidenced in classic chromatic postcards popular in the first half of the 20th century. Stamps not included.