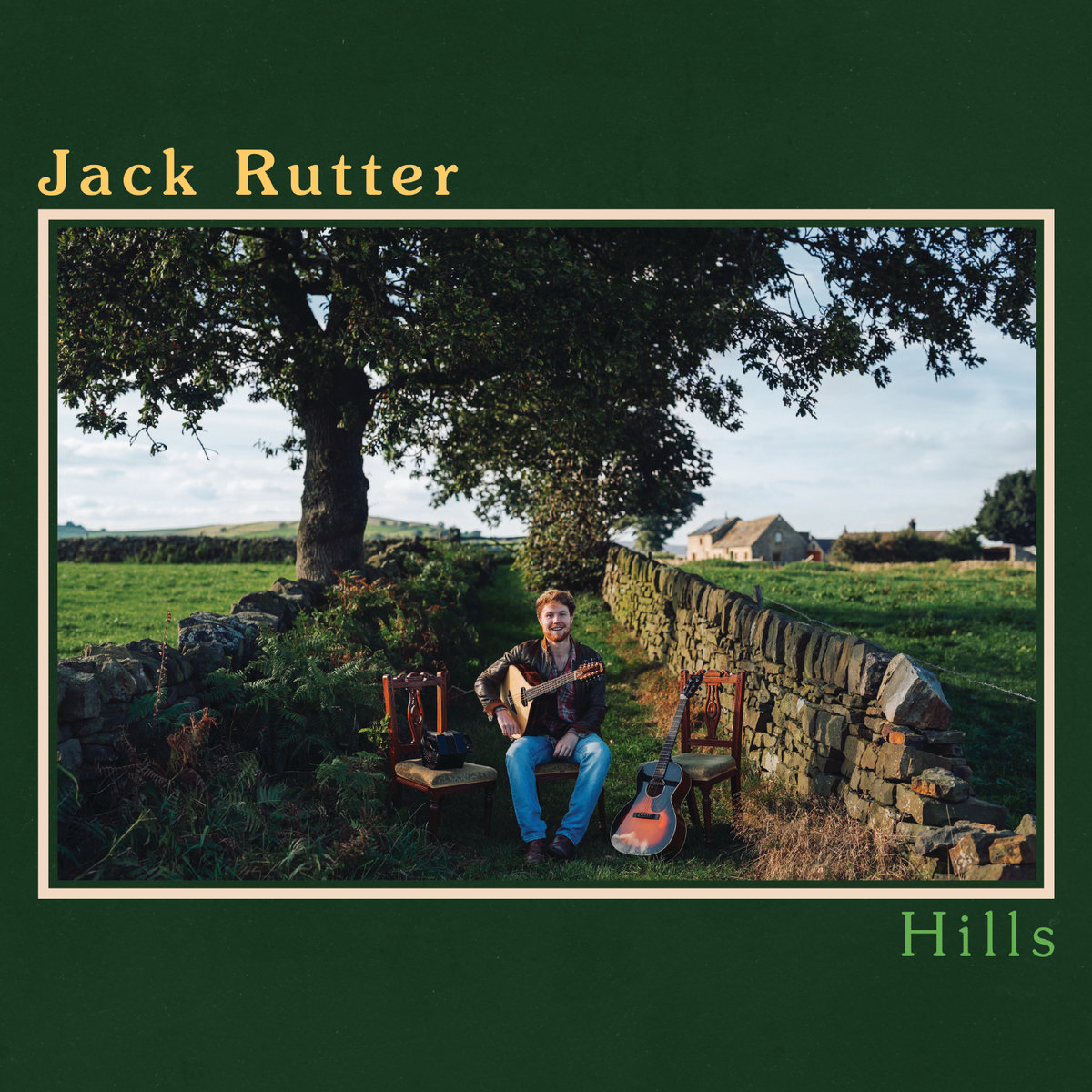 What a pleasant surprise from a musician who’s paid his dues in academia, as a back up musician to the great and the good and with equal billing in the Moore, Moss & Rutter trio; now finally branching out solo.

Hills finds Jack Rutter in true professional Yorkshireman mode. Placed firmly in a frill free, no nonsense zone that sees him pictured on the cover not artily photoshopped or in studio affected poses, but parked  by a dry stone wall with his gear.

As it should be, Jack finds himself ensconced in Joe Rusby’s rural studio, himself no slouch and the perfect foil to accomplish the task to record a live and not quite what you’d call raw, but definitely organic set. In fact what Monty Python would call a ‘woody’ album. Not a ‘tinny’ one. You can’t beat wood…

So, with the Rutter package and his credentials as a musician fairly well established,  the equal billing and the space given to bringing his voice to the fore on Hills is a revelation.  Used to seeing him leathering an electric guitar on Seth Lakeman’s Poor Man’s Heaven or Willow Tree? Maybe experienced him working up an unstoppable jig with Tom and Archie? If so, prepare for another side of Jack Rutter (a good album title in itself had it not been used by Dylan). His usual high octane onstage energy comes toned down and although Hills may be free of fuss and frills, there are no shortage of thrills. Not exactly white knuckle ride thrills, but more like chills in the intensity, the sensitivity and the delivery that marks Jack in the bracket of  “mature and rounded” – the archetypal old head on young shoulders.

Establishing the tone by warming up on  a familiar Hey John Barleycorn, The Deserter offers a poignant delicacy and there’s a gentle curve ball in turning to the concertina on Morning Trumpet whose Salvation Army clarion call sits comfortably with the more overtly traditional folk arrangements.

The material is unsurprisingly rooted in what they call God’s own country. Dave Burland’s The Dalesman’s Litany might be a worthy B-side to On Ilkley Moor as the Yorkshire anthem and is given a respectful reading until Jack lets relatively loose with some vibrant driven guitar while seeking deliverance from Hull, Halifax and Hell.  There are generous nods then to the folk collecting of Frank Kidson and Wiggy Smith plus the result of effective time on a misspent youth soaking up the traditional songs in various locales. Whist his mid-teen pals might have been doing whatever mid-teens do these days,   Jack might have been found immersing himself in a Waterson’s boxset borrowed from Huddersfield library.

Highlights? Many step up for consideration at various points although ultimately the seafaring young Susan On Board Of A Man-Of-War emerges as a song which makes for a lasting impression. Explained as “much thought of among the seafaring classes round about Hull” perhaps offers  a suitably weighty  response to those  who may mock  Hull as the 2017 city of culture.

Even Jon Boden has compared Hills to “the great folk albums of the seventies” and who is anyone to argue with him in terms of sound, execution and philosophy.

You can see The Banks Of Sweet Dundee from the album here: