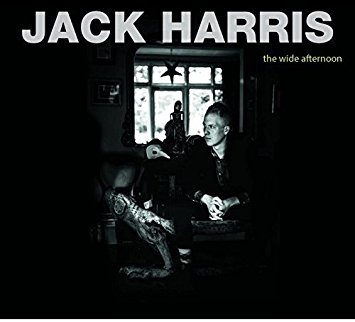 An album supported by a  kickstarter  project with the tag  “the difficult third album! (made easy)”  found investors  putting their money into  a gamble that for once sees everyone a winner.

Catching Jack playing a brief set at the 2016 English Folk Expo’s EFDSS Showcase (that’s the English Folk Dance & Song Society)  last October –  gave  a taster which is proof of the old adage about being left wanting more.  An aperitif which certainly had the desired effect, whetting the appetite for what’s been called an album with “a darker tone,  broader in scope and sound. 12 new songs, 12 short stories put to music.”

While it’s the Harris name on the ticket, the  expanding sonic palette comes courtesy of the contribution of Gerry Diver. Aside Jack’s guitar and vocals he provides literally “everything else” from the simple and subtle to the more generous percussion and string arrangements. However, ‘The Wide Afternoon’ is dominated by the fascinating  characters and narratives created by  the intelligent and articulate songwriting core of Jack Harris.  Rooted in folk and blues traditions, stating the case openly in the opening song and opening lines of the pre-eminently folky titled  “I Walked Out One Morning” that contains a quality which wouldn’t be out of place in a Tudor court courtesy of some rolling and tumbling percussion and a stately  rhythm. Yet don’t fall into the trap of doing him the disservice of regarding him as just another folk singer –  not overtly obvious,  he dips into Irish and American tinged  blues and folk song whilst adding jazzy touches amongst the magpie collection of influences.

Lyrically he  makes  his  first significant mark with ‘Bird On The Broken Clock’, casting his message over the gentle strum of the guitar embellished with  some stuttering Diver fiddle. Elsewhere, he broods and burns while the hypnotic pulse of ‘The Horses’ while pursued by the menace of the old enemy, the black dog. Lighter musical moments contained in ‘Molly Bloom’ still contain an underlying bleaker lyrical tone.  It’s repeated listening that slowly reveals the quality of the finger picked guitar and nuances in the breathy and grainy delivery, particularly where Harris takes centre stage solo  – the title track and ‘The Oldest Man’ (one of those jazzy moments) typify the quality of the detail in  his observations and the eloquence which graces his subjects.

‘The Wide Afternoon’ is ultimately a record  deserving  of one of those old fashioned experiences – sitting and actually listening, under the headphones, poring  over the lyric booklet, getting lost in the moment.  A rare quality.

You can watch  ‘Vanished Birds’ from the album  played live at Spiritual Sessions here:

He is  also on Facebook  and tweets  as @jharrisfolk