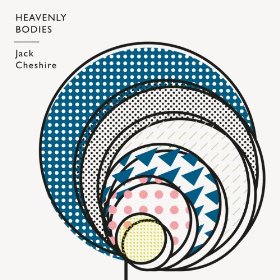 From last year’s marvellous Long Mind Hotel album, Jack Cheshire returns with one of its finest cuts in the form of Heavenly Bodies.

It’s a slow, beautifully crafted affair with winsome guitars and gorgeous cymbal strokes which perfectly compliment Jack’s soft tones. Superbly written by a poet in waiting, the track gracefully proceeds through lyrics that sometimes don’t quite fit into the gaps and rhymes that are few and far between. Not many write a bit of alternative folk-pop quite like Mr Cheshire does.

It’s surely only a matter of time before he breaks through to a larger audience, or at the very least secures a support slot with a major artist. Currently punching below his weight, he has oodles of talent on his side.

Backed by another album track in the form of Postcards From Sedation which again moves at an easy pace with a smothering of organized jazz and tinkling keyboards. Jack clearly cares about words and sounds in equal amounts and the time taken to ensure this is easily observed in the final product.

Heavenly Bodies deserves at least to be featured as a backing track to a TV advert or promo, and that push may well just bring him a well deserved step closer to our homes.