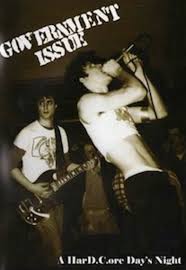 We are sorry to report that one of the legends of the DC hardcore scene and frontman with the influential Government Issue John Stabb has died of stomach cancer.

Stabb, whose real name was John Dukes Schroeder, died after a 112-day battle with cancer, according to his wife Mina Devadas. He was 54.

Government Issue were contemporaries of Minor Threat and very much part of the intense Washington DC hardcore scene they were one of the first hardcore punk bands to release a record – “Legless Bull” – on Minor Threat’s Dischord Records.

Stabb, known for his flamboyant stage outfits, was at sartorial odds with other early D.C. bands, which were often dressed in leather jackets and ripped jeans.

Stabb had a look and stage persona that he often described as “The Clown Prince of Punk.”