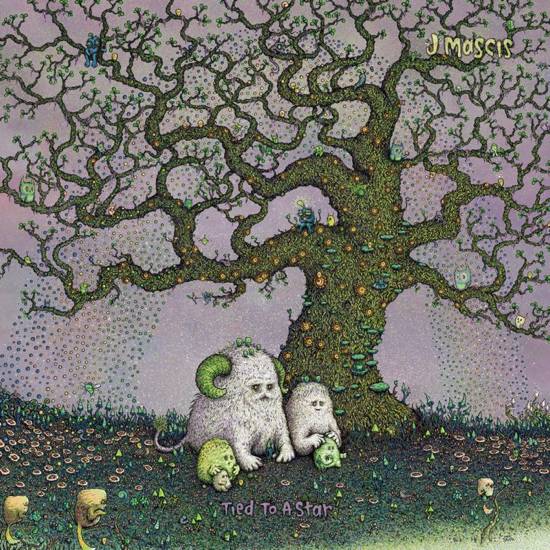 For a long time Dinosaur Jr. fan, J Mascis’ solo work has often seen him depart from the usual heavy artillery, focusing more on the acoustic side. Tied To A Star is no different in that it sees him opting for intricate acoustic jams as opposed to heavy riffs. Sometimes in his heavier guises the magic of his lyrics can be lost, whereas Tied To A Star allows us to focus much more on the genius lyricist that he is.

Opening up with the beautiful Me Again, the delicate melody opens up before J Mascis’ trademark voice fills the space. His delivery is beautiful coupled with the beautiful lyrics, it seems to me to be a song about loss but how he feels freed by this loss. Every Morning is much more upbeat affair, although the subject matter isn’t perhaps the most cheerful.

The album picks up pace seemingly though, the subject matter remains similar to that of earlier tracks. It almost feels like a journey through time, starting off with the early morning journeying through the day by the time it gets to Wide Awake the subject matter is somewhat happier. The addition of the ever brilliant Chan Marshall would brighten up any track and her guest vocals light up this track.

As more layers are added to the album it shows its true beauty, And Then is dense, with a luscious warm feeling to all of the instrumentation and J Mascis’ sweet vocal. This track has such a great feeling to it, following it though is the much more hurried and somewhat more intense Drifter it’s back to the intricate guitar playing. The absence of any lyrics adds to the intensity and it feels like a release of pressure.

However, if Drifter was a release of pressure Trailing Off is J channelling his heavier side. Again the track is much denser and the subject matter has drifted to a much darker place again as the riffs kick in. There are flashes of Dinosaur Jr. in this track, and as J chants “How much can I take?” The guitars get progressively heavier and there seems to be a heap of fuzz added into the mix, a track that perhaps wouldn’t sound out of place on any Dinosaur Jr. album.

The album closes out the way it started with beautiful intricate acoustic tracks, it is a true journey much mellower than what we’ve come accustomed to from J Mascis. However, it is an album that has depth and meaning it really does stand out, a beautiful album that is well worth checking out regardless of whether you’re a fan of Dinosaur Jr. or not.