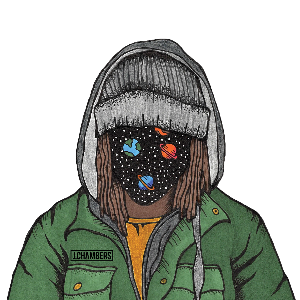 J.Chambers is one of a whole host of Manchester rappers/MCs doing great things in the city. With The Mouse Outfit, Children of Zeus, Dane and IAMDDB all representing the city superbly, J. Chambers is hoping to make his mark with his third album release.

New Levels New Devils follows Merchant of Manny and Moment of Silence 2 and sees J further displaying his fine vocal talents. At a notch over 20 minutes, New Levels New Devils is packed full of bars and beats that waste no time in going for the jugular of society. Lamenting lyrics that talk of personal loss to street violence, disharmony following the tragic Grenfell fire and everyday struggles of a poverty stricken society using foodbanks are issues that any self-respecting member of society can relate to on some level.

Having released two singles from this forthcoming project in the form of Gone Till November and D’Evils, New Levels New Devils has plenty of variety in its concise body. Renegade has a heavy Blaxploitation feel with some superbly layered strings. D’Evils comes out of the blocks with a gospel tinged backdrop to J. Chambers solid, personal flow.

J’s delivery of lyrics bites in many parts of the record. The passion, vitriol and conviction in what he says is clear. On the album’s title track, the venomous verses are lyrically focused with the soulful, R & B tinged chorus from SoulBlu adding superb juxtaposition. Life Is What You Make It follows the same aesthetic with a more pensive and reflective beat and melody and lyrics that talk of yearning for happiness.

New Levels New Devils is an interesting listen that draws you in musically and lyrically. The messages will resonate with many people, if the genre does not.

I got the chance to ask J a few questions about his upcoming project, his background and his influences.

Could you tell me a little about yourself and your background in Manchester?

I grew up North Manchester, I am from quite a musical background as my father was a DJ/MC in a reggae sound system and my mother used to be a singer in a band. I’ve always had a fascination with music and learnt to play drums at an early age, whilst writing songs in the back of all of my books.

I formed a band in my early teens as the drummer and we did quite well. At the age of 21 I went to America to teach drums at a summer school in New York State. Whilst there I met Kaisson Brothers, who saw my lyrics and my potential for making hip hop and convinced me to try it.

When I got back to the UK I put out one of the demos we recorded and it was well received. A few years later here I am.

Do you have any main influences that you have called on when making music? Local people, bands, artists etc

Yes, I’m heavily influenced by the music my mum played in the house growing up. She listened to Roots Reggae which has its conscious elements and it was from that music that I saw the first example of the value of the message behind words as all of the songs have meaning.

I’m also influenced by the great music my peers are making out here in Manchester so the likes of Dane, Layfullstop, Roots Raddix, Children of Zeus and The Mouse Outfit

What are the ideas and concepts behind the album?

New Levels New Devils is a reflection of where I am at in the Music scene. I feel like I’m on the cusp of breaking through the glass ceiling that all artists outside of London have to break through, so the project is an open discussion of going through that experience and trying to progress to the next level.

It’s also a reflection of my personal life. In NLND I talk about losing a family member to street crime recently and I vent my frustration at the lack of understanding in our communities in regards to resolving the issues that create street crime.

D’Evils, which was the most recent single, served as a mission statement for the entire project. It discusses street crime and why there was a brief hiatus with my music after Gone Till November (which featured Doc Brown) and also discusses some personal frustrations that I’ve been managing recently.

Energy is probably my favourite song on the entire project and I’d say deffo one to watch out for!

My music has always been very pensive and intricate because I feel that being bluntly honest creates immediate rapport with my listenership. I think this project is open and pensive, it’s a good insight into where I’m at, at the moment, and I think the narrative will resonate with anybody who is aspiring to progress to the next level in their craft.

The artwork is very cool…where did the ideas for that come from?

The artwork was the vision of American artist Perri Runion. I was so blessed to get her on board with this project, as she has created all the pieces for the singles and also for the whole project.

I sent Perri a handful of cuts from the project and asked her to create something that embodies the nature of the songs. She came back with the image of the universe on my mind. This is due to the broad subject matter of my music and how I seem to touch upon multiple subjects in one small verse.

What are your thoughts on album length? Your record is a little over 20 minutes much like Nas/Kanye/PushaT’s new releases. Is 2018’s diminishing attention span a factor?

My project has been finished since February 2018 and I’ve always had the vision for having shorter projects. Both Merchant of Manny and Moment of Silence ii: The Road to Perdition are around the 6/7 song mark.

I feel this is because my music is lyrically dense. By keeping it short it forces fans to re listen to my music and each time they listen they’ll catch something new that they may have missed before.

I do think that our attention spans are much shorter, as we live in an age of instant gratification with music and this means that music is now more disposable.. if you subscribe to that trend. I feel that artists who put out constant content can sometimes force their music to become disposable as by the time fans have digested the first song, they’re hit with a second and third.

Sometimes this can be detrimental to engagement, I feel that the gaps between my music create a kind of hype as people do tweet or message me asking for new music.

Do you have any particular favourite parts of your album?

I’ll answer this by asking you what’s your favourite part?…My favourite part of the creation process was writing D’Evils as I got to write from a more wordplay/braggy headspace which was quite fun to do. I wrote it as a freestyle rather than a song.

My favourite song on the project is Life is What you make it. This is because there’s no holds barred it’s just where I’m at and also me talking about my life very openly and I think people will relate.

The standout single will be Energy, as when I’ve performed it live, it has brought down the house every time.

What other artists would you recommend from Manchester’s growing hip hop scene?

My favourites at the moment are; Dane, Layfullstop, Woddy Green, Roots Raddix, Robin Knightz, The Mouse Outfit, Dyno, Miasma and of course Children of Zeus. Although I love all the music from our city!

Is there anyone that you would love to work with personally?

I’d love to get back in the studio with Konny Kon from Children of Zeus. We had a tune together from a few years ago that we’ve yet to put out but that song was really wavy.

I’d love to work with hip hop legend Jehst as he opened up many doors for hip hop purists in the UK.

I’d also really love to work with Alfa Mist and Tom Misch as I feel that if the three of us got in the studio we would make something really amazing!