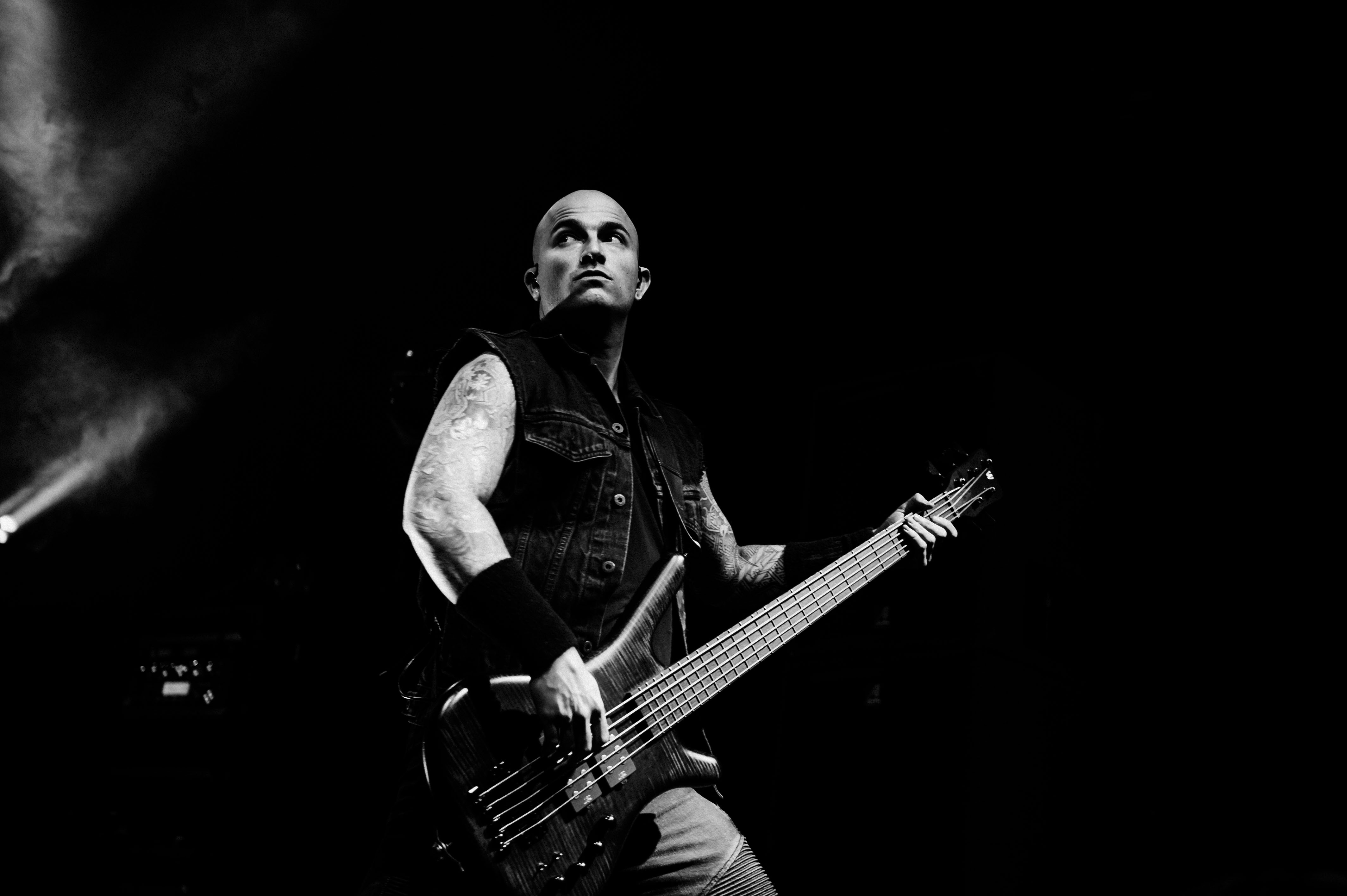 As Trivium made their way across the UK for their latest tour, Louder Than War caught up with bassist Paolo Gregoletto for a quick chat to find out what forms the band’s thinking when putting together a setlist and what the band hopes to achieve in the future amongst meeting icons and what the band are currently listening to.

Louder Than War: What keeps you going as a band nearly two decades into your career?

Paulo Gregoletto: Every time we start a tour and see all the fans that came out to see us, both old and new, it’s really the fuel for this whole machine.  It is exciting and humbling to experience it.

How would you say the band has evolved over the course of your time together? I know there have been changes in personnel; how has this affected the band dynamic?

The drummer changes have strengthened the bond between Corey,  Matt, and I.  We’ve had to make sure that the core of the group has been functioning at 150% till we finally landed on the right choice for Trivium long term.  We adapt to whatever situations we find ourselves in.

Do you still get that ‘wow’ feeling when you meet people on tour e.g. bands that you admire, potential heroes of the band? Are there any particular tales to tell?

Definitely, I’m wowed by how normal most of the bands like Metallica,  Iron Maiden,  Megadeth or Slayer are when we meet them.  At the end of the day they all started the same way we did, kids in a garage or bedroom with a dream to make music their life.  So once you get past the awe of meeting them and have a beer, you realize how cool most people in rock and metal really are, not matter what level the band is at.  I’ve had drinks with all the bands I listed above; it doesn’t get cooler than that.

How do you decide which songs make the cut for a live show? Do you like the safety of a constant setlist or one that changes daily to keep it fresh?

With Alex, our new touring drummer, we decided we would play a longer set (90 minutes) but keep it consistent every night to tighten up the show.  In terms of what songs we play, it’s a choice we make at practice and just sort of call out what we are thinking to one another.  We also check what we played the last time we were in a town so we don’t become redundant to our fans.

What more recent bands have you been listening to lately? Metal and non-metal!

I’ve been listening to the latest Dark Tranquility album, Atoma, non-stop for the last two weeks. They are a legendary band that is sometimes overshadowed by their peers in Gothenburg. I am all over the place musically. I bounce around from rock and metal, to Motown and funk, and maybe some Top 40 and hip hop now and then.  I’m always looking for melody and rhythm to inspire future ideas.

You’re a very prolific band and you clearly do things for the love of it. What are the ambitions of Trivium going forward?

The main goal is to make sure that every album and tour that we do is authentic and true to what kind of band we want to be for ourselves and our fans.  It’s easy to get distracted or divert from that path, especially the longer you do it, but we are in a good place now mentally, physically, and musically, so I hope that this last tour can send us into the next album with some fire in us.

Trivium will be touring all of mainland Europe throughout March. Tour dates can be found here. Paulo tweets as @TriviumPaulo and Trivium can be found online, on Twitter and on Facebook.

Photograph by Andy Whitehead from Trivium’s show in Manchester. More from Andy can be found online, on Twitter and on Facebook.