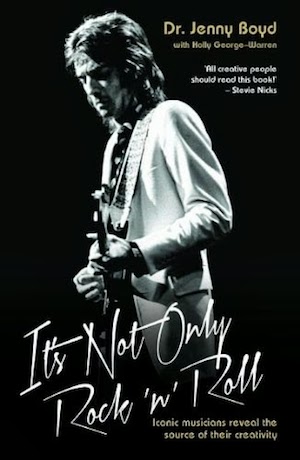 Robert Pegg reviews It’s Not Only Rock ‘n’ Roll by Jenny Boyd Ph.D in which iconic musicians reveal the source of their creativity.

A word of warning if you are considering buying this book. You may have already read it.

First published in the USA and Japan in 1992 under the title ‘Musicians In Tune’ the book is a rerelease with no additional information, no revision, no update and no explanation. Curiously, the dedication on the inside leaf is to the memory of the late George Harrison, despite the fact he was very much alive and well when it was written and first published. Others that have passed away since first publication have the word ‘late’ prefixed before their name throughout the book, but that’s as close as you’re going to get to an update.

The author, psychologist Jenny Boyd, was for many years close to the heart of the music industry. Sister of Pattie Boyd, the first wife of both Eric Clapton and George Harrison and herself sometime wife to Mick Fleetwood, it is from these peripheral edges of the industry that Boyd has dived into her Rolodex and used her array of contacts to form her Ph.D thesis on what it is to be creative and how to enhance and nurture your creative soul. ‘It’s Not Only Rock ’n’ Roll’ is that thesis.

It takes some doing to make an academic paper entertaining and interesting to the average reader and the book relies solely on the recognition of the names of the people interviewed for the research to hold the readers interest. Fleetwood Mac, some of the Rolling Stones, a couple of Eagles, a Beatle or two, a Jefferson Airplane and a Kirsty MacColl are all interviewed at length about their background, influences and their drive to create music.

The first couple of chapters are devoted to the aforementioned as well as many others disclosing that as children they were surrounded by musical instruments as well as parents and other relatives who encouraged their talent and creativity. The theory therefore is that if a growing child is encouraged to be creative and has access to the tools enabling that creativity then in all likelihood they will be creative. I’ll leave it to the reader to decide just how obvious that statement is and in one of the very few revelatory moments in the book, Paul Kantner of Jefferson Airplane nails this theory:

“We were middle-class kids with no problems compared to what other people in the world face. We weren’t rich but we weren’t poor. We were comfortable, we went to college. We were just drifting without any idea what we wanted to do.”

Likewise, tales of vivid dreams and imaginary friends from childhood are certainly not exclusive to people of a creative nature. That’s simply called – childhood.

The theories on creativity that lie at the heart of the book appear on the face of it to be reasonably sound and they may be worthy of some additional credit if the author had taken the twenty years or so since it’s first publication to cast a fresh eye over them. The popular musical landscape has changed enormously in the last two decades, as popular music is wont to do, and it is in refusing to acknowledge that change or give any real credit to any other musical genre other than traditional or prog rock that reveals how hollow the theories are. This thesis is not just about what is said – it’s about what isn’t said.

For example, electronic music, which was really coming to the fore at the time of initial publication is dismissed by the interviewees as “lacking the expression of the soul” or blocking the audience off from “creativity of the spirit” –  a wholly unfair and dismissive attitude that has more than the tang of sour grapes about it. The book is firmly locked into the 60s and 70s and point-blank refuses to leave. Punk rock gets a blink-and-you-miss-it nod and popular music like Madonna is snobbishly dismissed as “basically crass and appeals at the crass level”. Rap and Hip-Hop are given some due credit and in another moment of unexpected but very welcome clarity, Ice-T admits that creating music is “nothing hard (to him)”, “it’s easy”  but no sooner has he said it then we are back to the Jungian theories of collective unconsciousness as though he’d never said anything at all.

It would have been to the authors enormous credit had she stepped outside of her comfort zone and examined the creative process behind electronic music, punk and rap but unfortunately this is an opportunity missed.  Punk rock was not born of middle-class parents indulging their creative children and hip-hop and rap didn’t even have the cadged or stolen guitars and drums that punk boasted. All they had to start with was the lyrical, poetic dexterity of it’s artists imagination. Now that, is creativity.

As an academic dissertation the book is fairly pedestrian stuff. If you remove all the famous names and celebrity anecdotes it is a distinctly average study in the psychology of creativity with a bit of cod spiritualism thrown in. Relying heavily as it does on the theories of Swiss psychologist Carl Jung and the process of self-actualisation the book betrays its weakness. In recent years Jung has been heavily discredited as have the self-actualisation theories of Abraham Maslow, who is also heavily referenced.

The chapters addressing drugs and alcohol used by artists to enhance their creativity come from a predominantly retrospective anti-drugs point of view which is understandable, if not admirable. The one area where the book does succeed and has a strong point to make is to expose the myth that drugs and alcohol can enhance creativity or, on the occasion that they do, the resultant physical and psychological price is often not one worth paying.

The appendix shows that all the subjects of this book were asked exactly the same questions in exactly the same format. They all gave, more or less, exactly the same answers.  There is another conclusion to be drawn here: the conclusion is that far from being bold and courageous and exciting and innovative and creative, musicians are in fact, a bit dull. Because if everybody claims to be unique then nobody is.

The message of the book is this: Do we all have the creative impulse inside of us? Yes, of course we do. All we need to do is find our own gift and nurture our creative impulse, because nurturing breeds self-confidence and a will to create and express your true self.  That much is self evident.

It’s a laudable sentiment and it’s all coming from a very good place, but in trying to carefully balance academia and popular culture the book unfortunately succeeds in neither arena and the casual reader will be left as disappointed as the serious student.