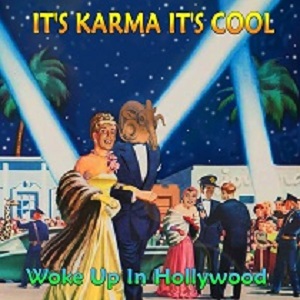 Debut album by the four-piece band that hail from Lincoln UK, with guest appearances from Rex Broome of The Armoires and Brian Barry from the Flaming Cortinas. This follows on from their 2019 Hipsters and Aeroplanes EP …….Ian Canty isn’t cool and doesn’t need more negatives which may crank up the karma he’s got coming…..

Lincoln’s It’s Karma It’s Cool may have not been around for a long time, but they’ve gone busily about their work in the last 12 months. Two tracks released on the excellent Big Stir Digital Singles series in Wooden Buddha/Ghosts Of Rome (later included on excellent The Fifth Wave comp and present on this record too), an extended play/mini LP called Hipsters And Aeroplanes from the late summer of last year and now this, their debut album. So far the quintet of singer James Styring, the excellently named drummer Danny Krash, guitarist/multi instrumentalist Martyn Bewick and Mikey Barraclough on bass and other guitars have definitely ticked the right boxes and made good impressions. But how would they fair over the extended running time of an album? Woke Up In A Hollywood shows a band full of good tunes and energy, so lets have a look in a bit more detail.

An unusual clip-clop rhythm and choppy, punky guitars introduce opening track Our Love Is An Amplifier, which even manages to include some dreamy harmonies and whirling synth pattern along the way. The refrain “We are what we are tonight” is infectious too. There is a lot going on here and It’s Karma It’s Cool are never short of a neat idea that pulls them swiftly away from the pack. Bubblegum Monsters follows in a more classic 60s pop mode, building with a gentle but steady tension to the cool flow of the chorus and Back In ’78 is a pop/rock gem, lyrically casting a eye over the protagonist’s activities over the years. The title track has a gritty riff underpinning and some classy vocals, with the handclaps at the end typical of the attention to detail that seems to be a trademark of the band.

Next follows Wooden Buddha, one side of their Big Stir single. There’s a lush orchestral feel that underpins what is almost a folk tune, but an edgy guitar in the background helps to make the tune distinctly something more and powers it along to a pure pop release of a climax. The song fades out with what appears to be a radio interview with Buddy Holly. The Girl Who Gave You Everything’s pulsing beat mines 60s pop and has a lovely acoustic picking on it (Lannie Flowers helps out on guitar here) and America Sushi drifts by in a dreamlike haze until it reaches a very cool coda.

The album’s wild card comes next, the off-centre reggae setting of New Age Eve giving way to a big pop chorus that floods through with lovely harmony singing. Healer’s Leap has a shimmering piece of Byrds-style 12 string from Rex Broome of the Armoires, accomplished with the kind of expert taste and warmth that also marks his band’s work too. Brain Barry adds some harmonica and the result is kind of like a more rockin’ REM at their peak.

Ghosts Of Rome, the other Big Stir single side, almost has a touch of glam in its bounce, but the next offering Battle Of Burnt Out Bliss is truly epic. There’s all sorts of smart touches, like the Spanish guitar, which gives the sound a lyrical feel akin to film theme music. Sunflower ends Woke Up In Hollywood by providing some real fuzz noise and rhythmic attack, really going out on a high with the drums and bass emerging powerfully and being offset by honeyed vocal tones.

Dream pop is a genre term meaning something completely different, but perhaps dreamy pop is a good way to describe this album and the sound of It’s Karma, It’s Cool. There is a sense of the real and unreal clashing, an aura of mystery that is fleeting glimpsed but definitely there. All the while they seem to be trying to make sense of the strangeness that is the very centre of reality in 2020. Plus they always work hard to provided a musical landscape of much invention, one that is intoxicating and alluring, but able to come into pin-sharp focus when the need arises.

Crucially, the skill the music is put together with and breadth of sound presented isn’t a substitute for heart either. There’s nothing superficial here. On Woke Up In Hollywood It’s Karma It’s Cool offer up a beguiling, colourful world, adeptly mixing a fairly wide range of influences with something entirely of their own, offering the listener a very promising aural trip out of the workaday.